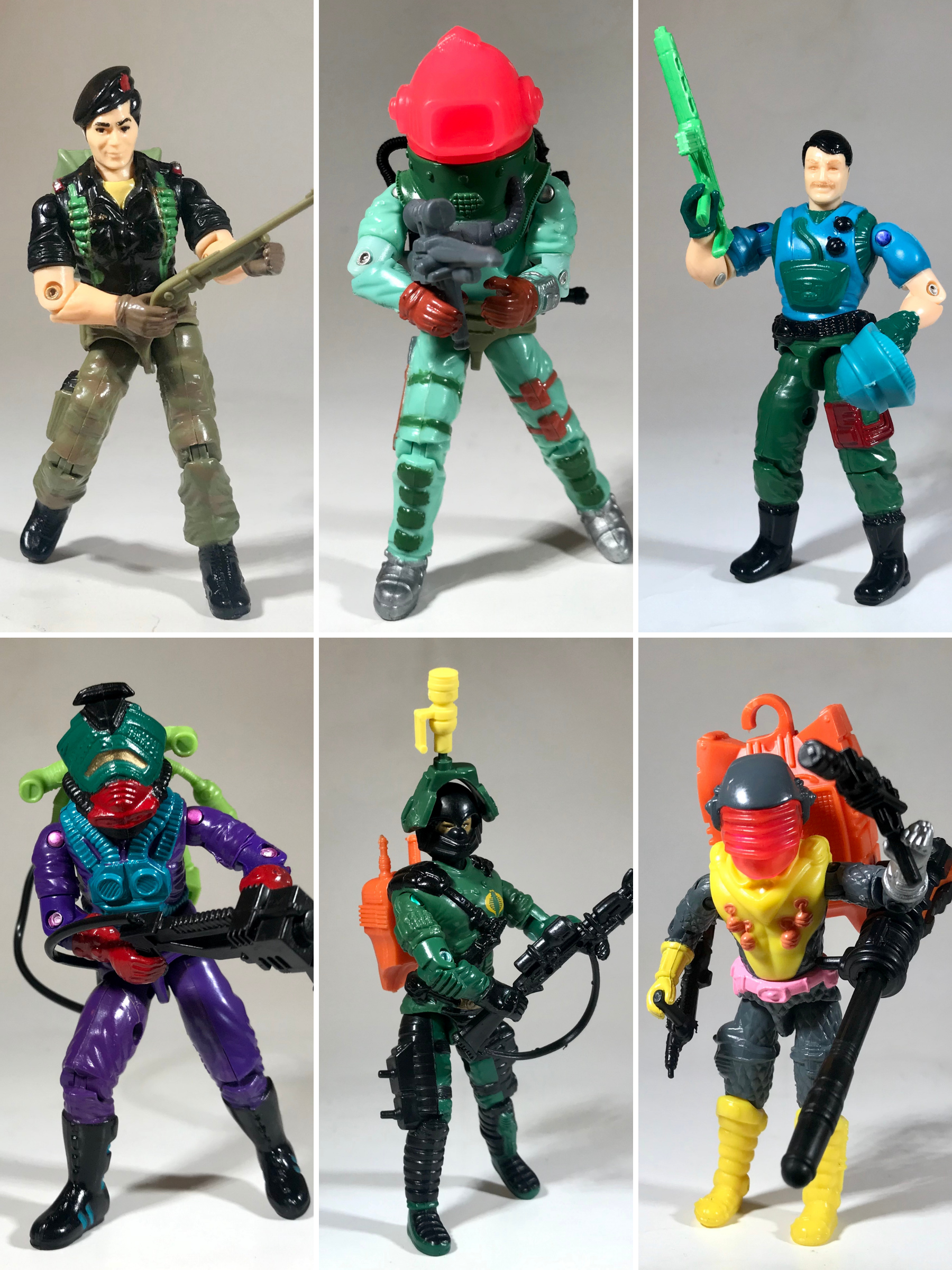 Today we’re keeping it casual at The Dragon Fortress.

We’re also taking a look at some amazing Transformers repro accessories a friend made for me.

Kick back and relax.

These aren’t blog posts, so you won’t see them in the main feed. But you can always find them on my dedicated GI Joe page or from the original Russian Funskool blog post.

There are also some new production tidbits in there, straight from a GI Joe fan who lives in a former USSR territory and can translate the card backs.

So,, there you go– that’s at least as much content as three regular reviews!

Now, onto the fun stuff. 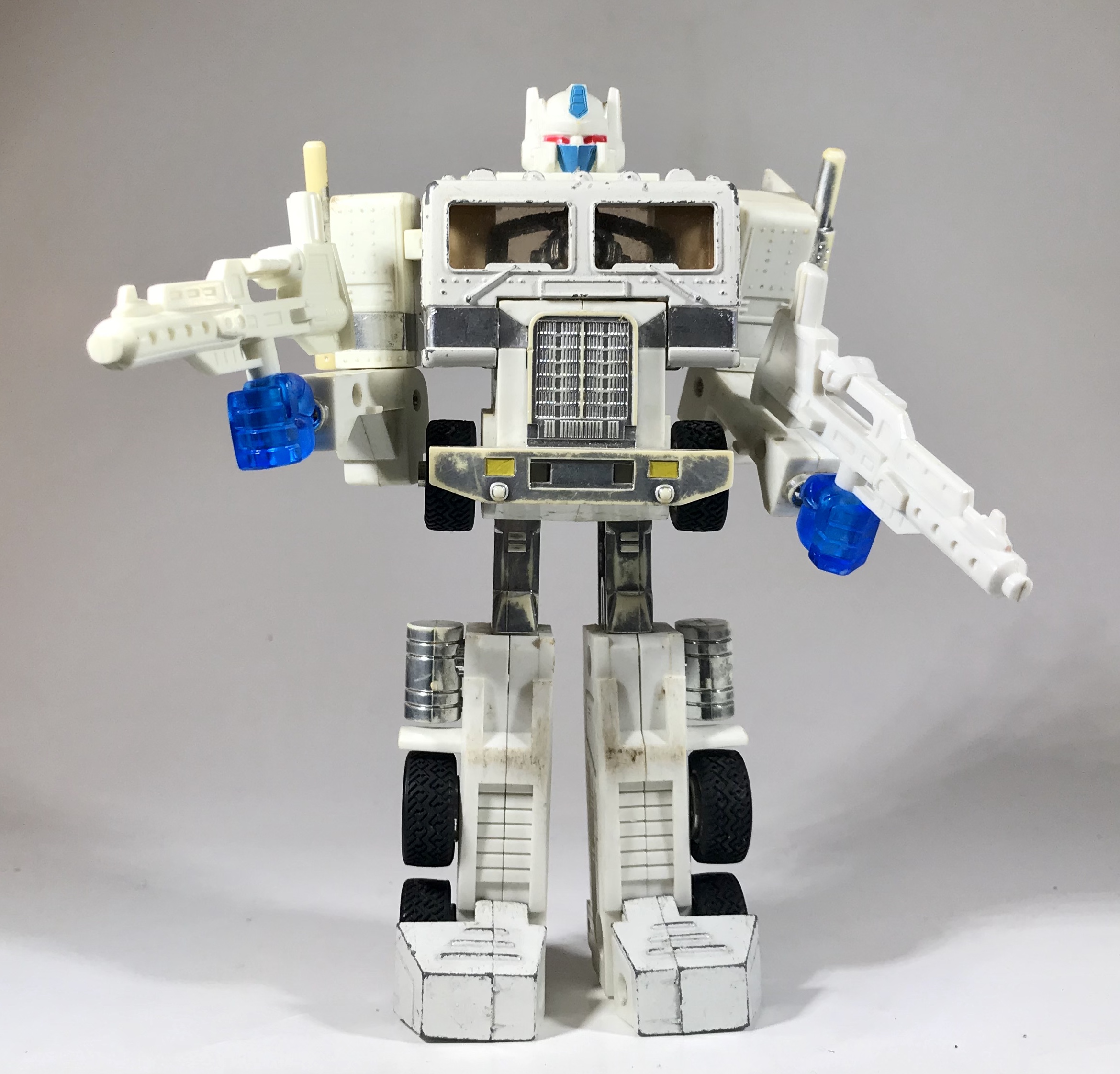 Recently, my friend Matt aka Blueshift sent me a copy of the TFNation Zine we worked on last year. He also included a ton of resin Transformers repro accessories he made. I am still in awe.

You can find Matt on Twitter. You can find most of his previous Transformers fanzines here, visit the TMUK forums he helps operate, and think about donating to Toy-Fu, which he is also involved with.

Matt is a dear old friend and I appreciate him sending me all of this shiny plastic.

There’s also a Swamp Thing pin in the photo because I got it at the same time.

For some reason, I have a lot of G2 Primes and Ultra Magnuses. I have four Magnus trailers/super robot bodies, three smaller “cab robot” Magnus figures, and three G2 Primes. They mostly take turns occupying the large Ultra Magnus bodies.

But now I have fist options for all of them!

The orange also matches him nicely, and it kind of recalls the famous energon axe he used in one whole episode of the old cartoon.

Both the clear blue and clear orange fists look great on an old, beat up Ultra Magnus, too:

Imagine how good they’d look on an actual nice Ultra Magnus! The clear blue works especially well with this toy, and gives him a pop of much needed color. 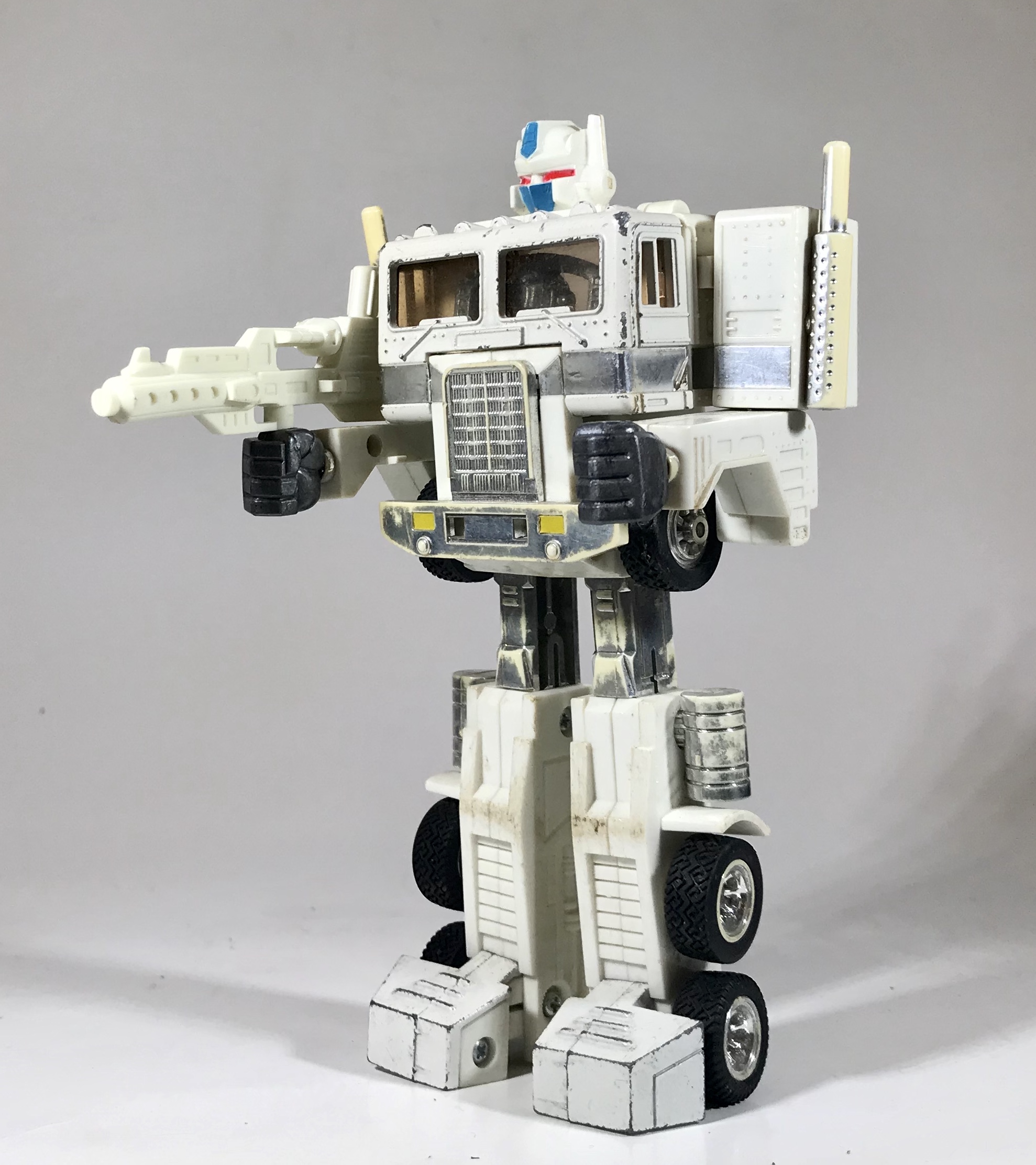 All of these fists give me some great options, and they work very well with every toy I’ve tried them on. Let’s move onto the bigger robots.

Matt also sent me three pairs of larger Magnus fists that plug into his armored up/super mode. These were especially great to receive, as I had both a no-paint variant Ultra Magnus and a cobbled-together Italian Powered Convoy that needed fists badly.

These clear fists are probably my favorite pair for the unpainted Ultra Magnus: 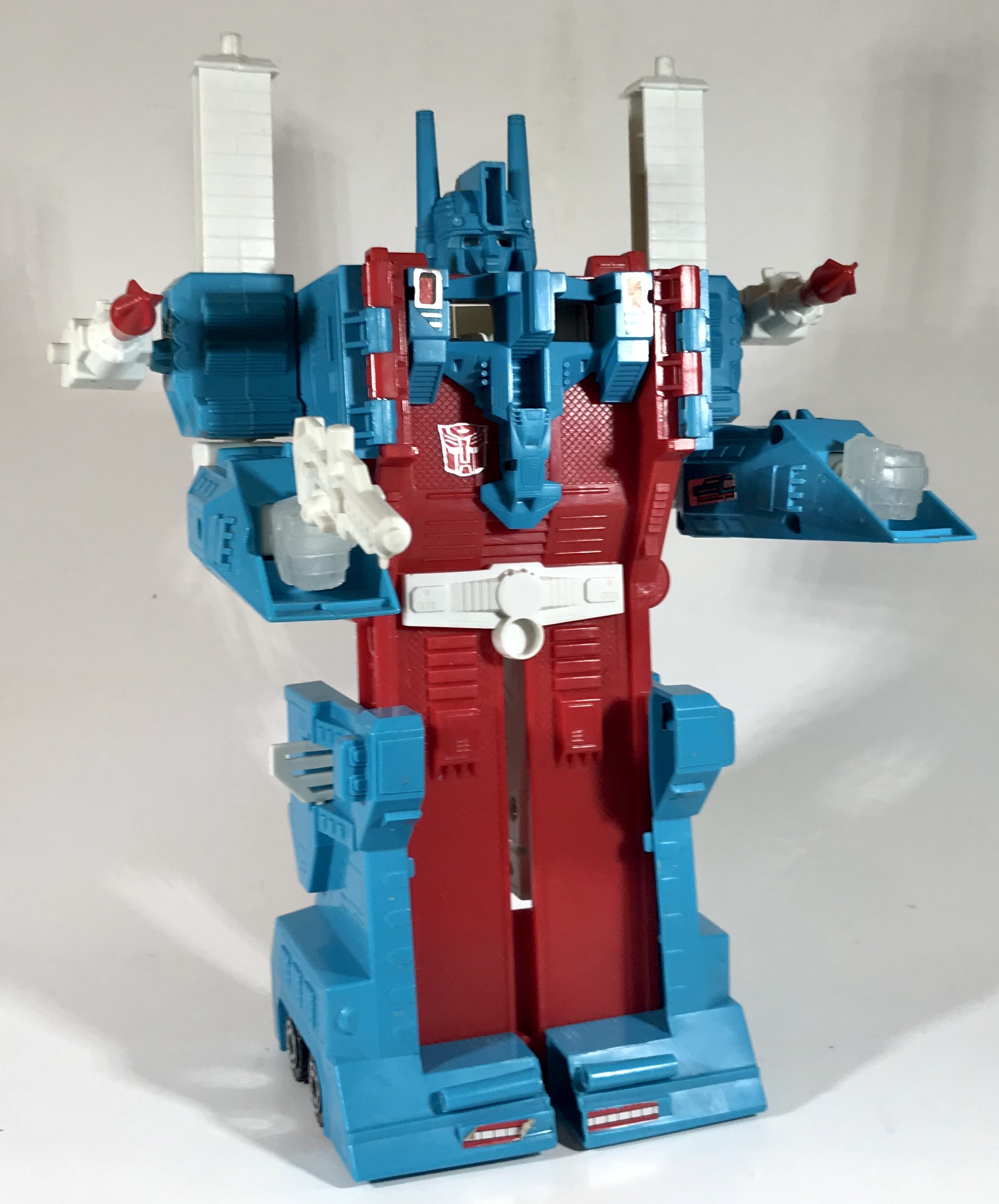 The blue doesn’t match any color on him, but the parts still look nice on this toy. 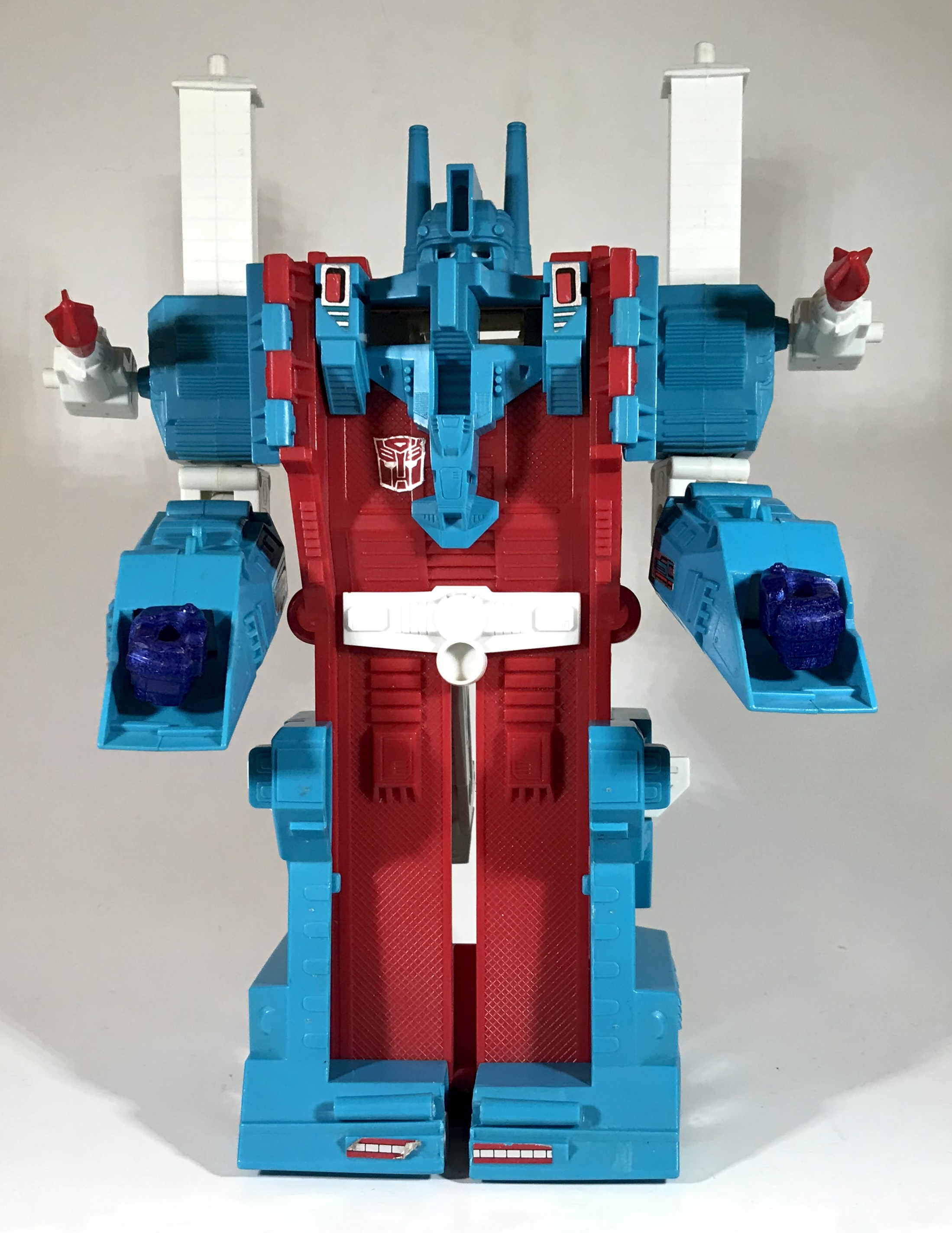 And the black fists aren’t too shabby, either.

Here’s my new, upgraded Magnus (who still needs his trailer doors, ugh) standing proud and tall next to my “painted” Ultra Magnus:

The blue and black fists weren’t really for Ultra Magnus himself, though. I was actually planning on using them with this mishmash Italian Powered Convoy a friend gave me about 18 years ago. I haven’t found any parts for him since then, so these repro pieces were a godsend. Also, my Powered Convoy uses a G2 Prime as his “inner robot,” which works perfectly. 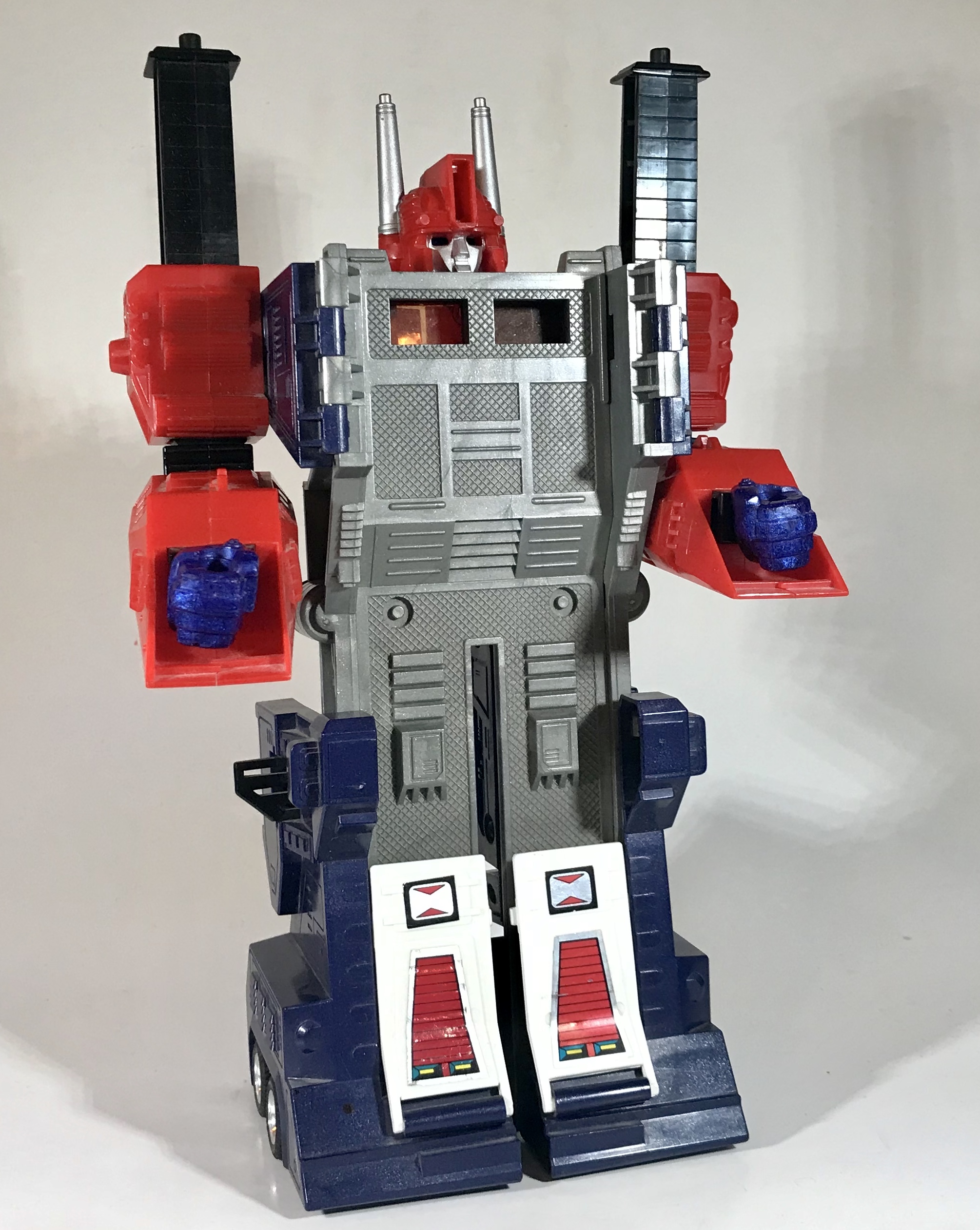 Even though the blue fists don’t exactly match his plastic color, they still look great.

I am convinced these clear fists would look amazing on any version of this mold: 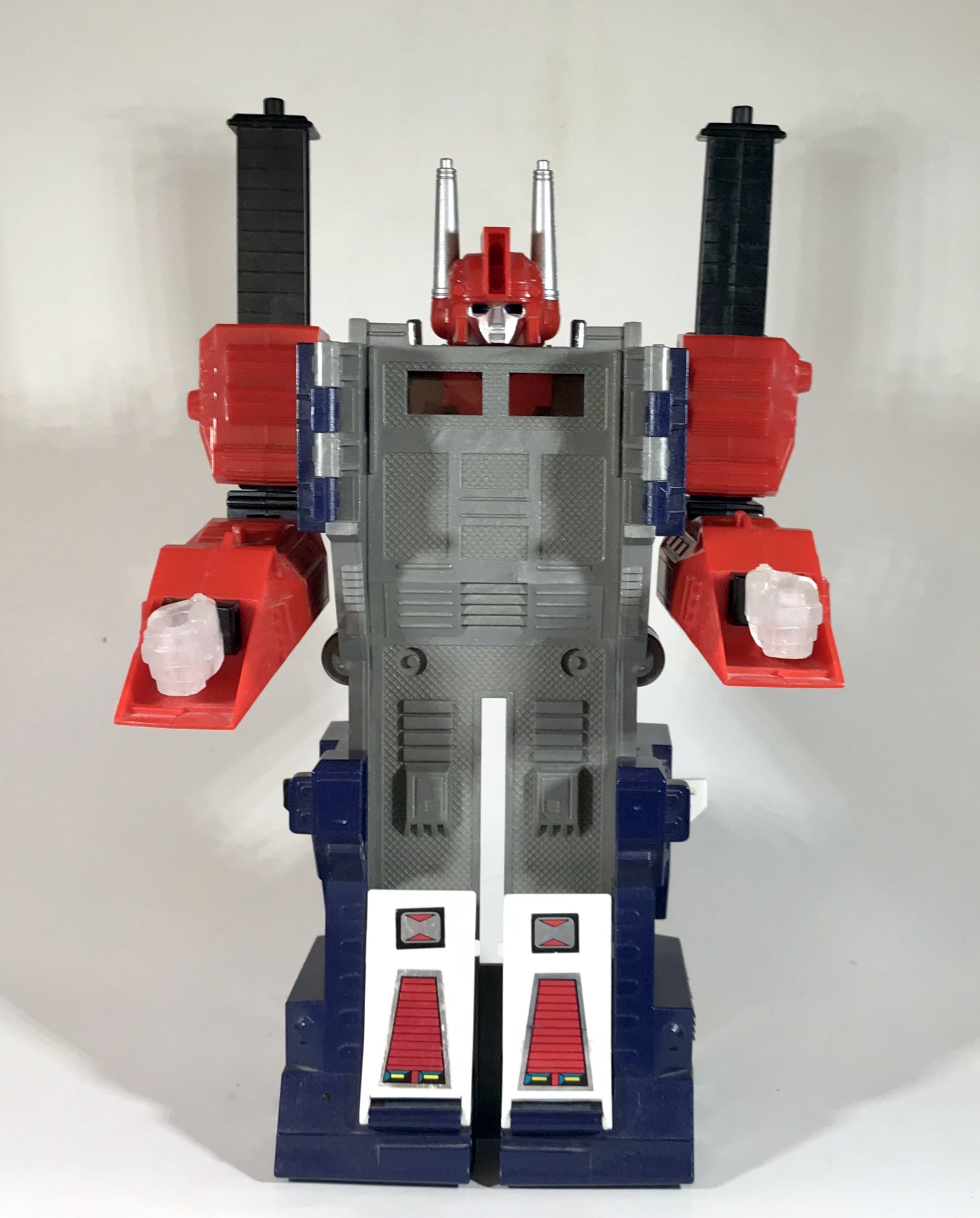 The black fists are, of course, the best fit for him though. I’ll be displaying him like this forever, as I can’t imagine anything else ever looking better. 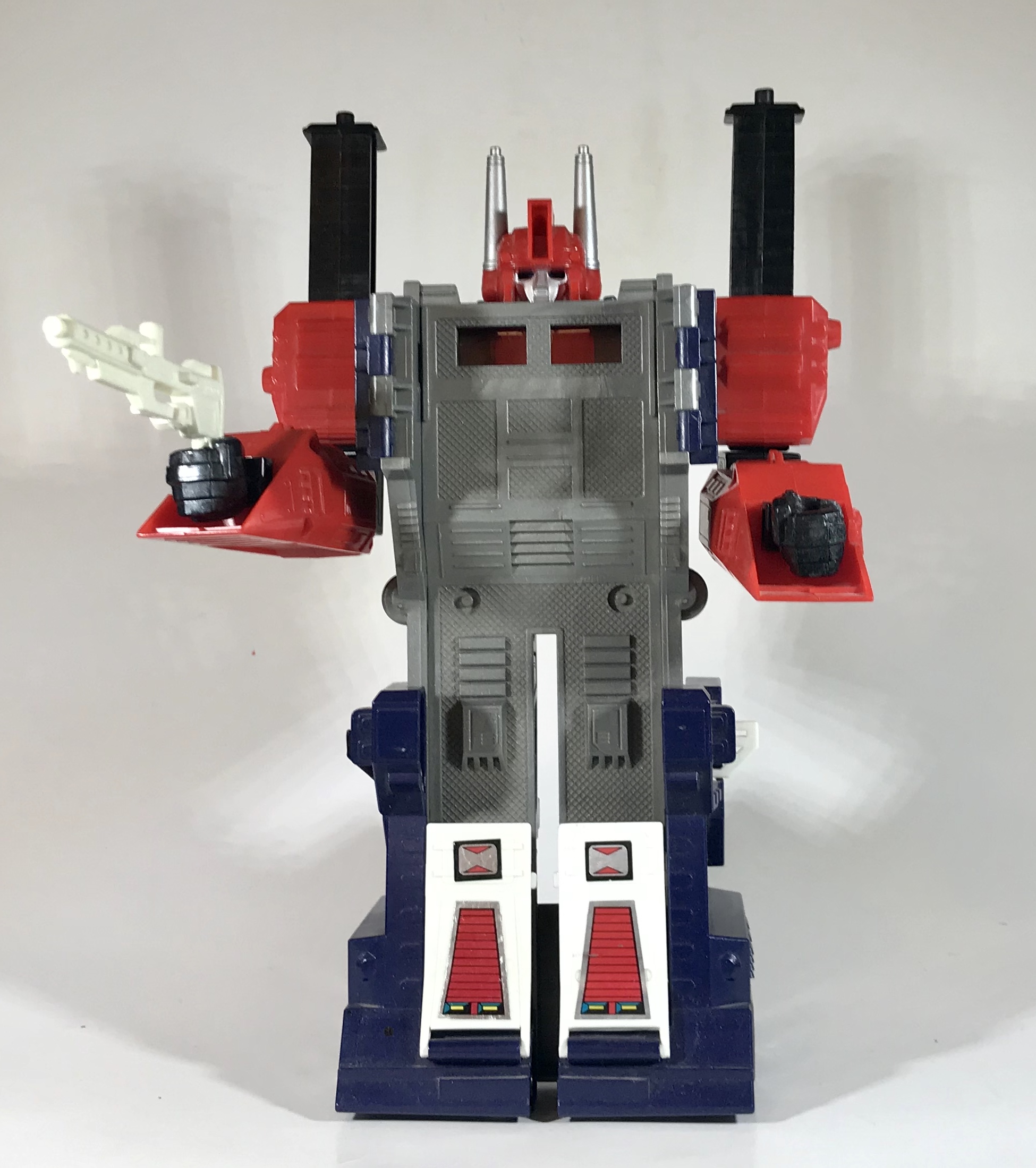 And, just for fun, here he is with the newly upgraded Ultra Magnus:

Apologies to Matt, but I only photographed one of his beautiful swords with an actual figure.

I acquired this green G2 Snarl when I was about 16. One of my slightly older friends was getting rid of his old toys, so he passed Snarl on to me. I have never owned an accessory for the figure, so having four swords to choose from all of a sudden is a real treat. 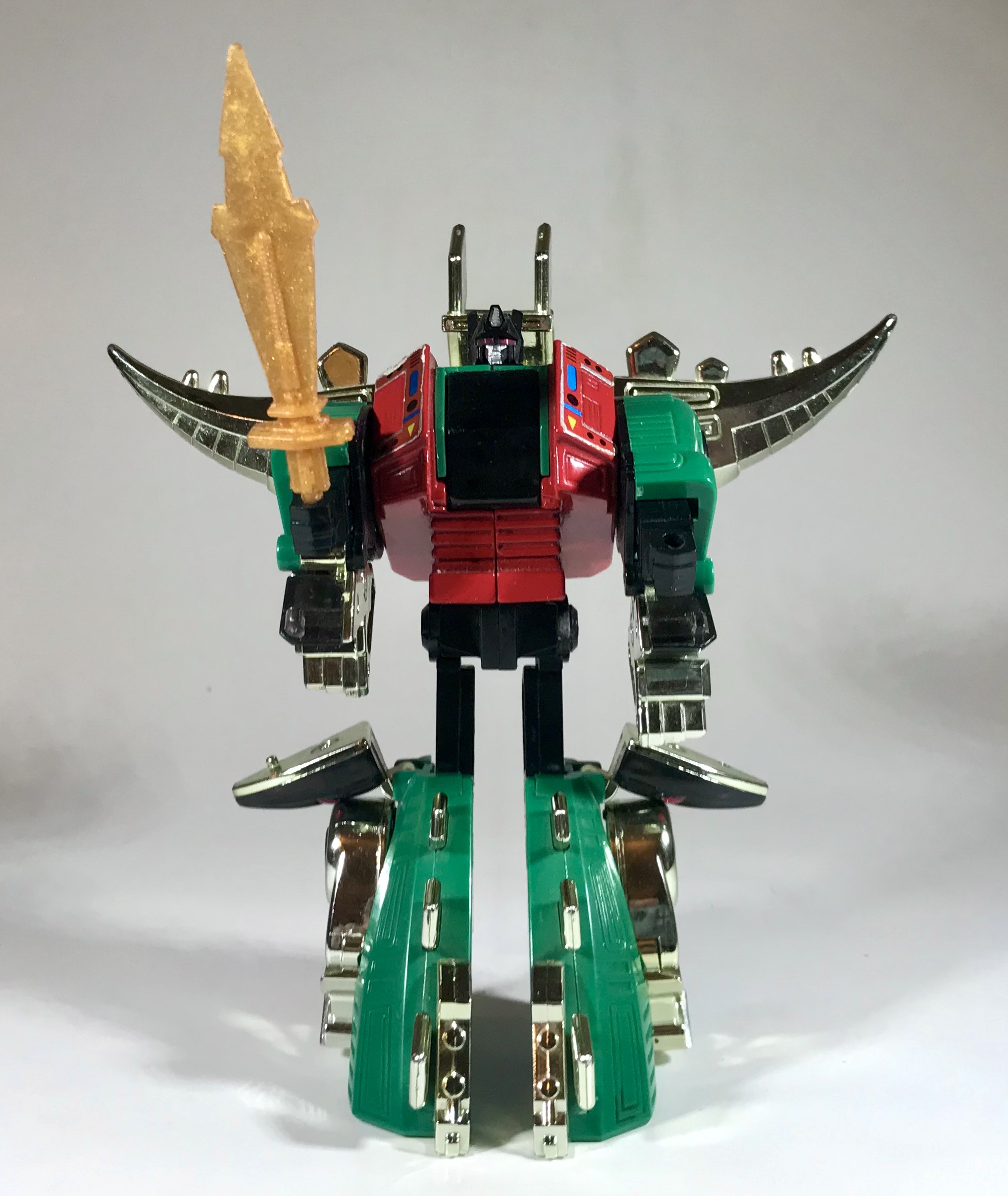 I thought the orange sword was the best match for him, so it’s the one I photographed. This sword will be staying with him until the sea boils the land.

But now I need to track down a red Snarl so he can have one of the swords, too.

Matrixes of Leadership for Optimus Prime and Ultra Magnus

Matt also sent along two Matrixes, which I assume were cast from some G1 Prime reissue or another. Each Matrix fits snugly inside Prime or Magnus’ cab, and can be stored inside whether the front window section is open or not. 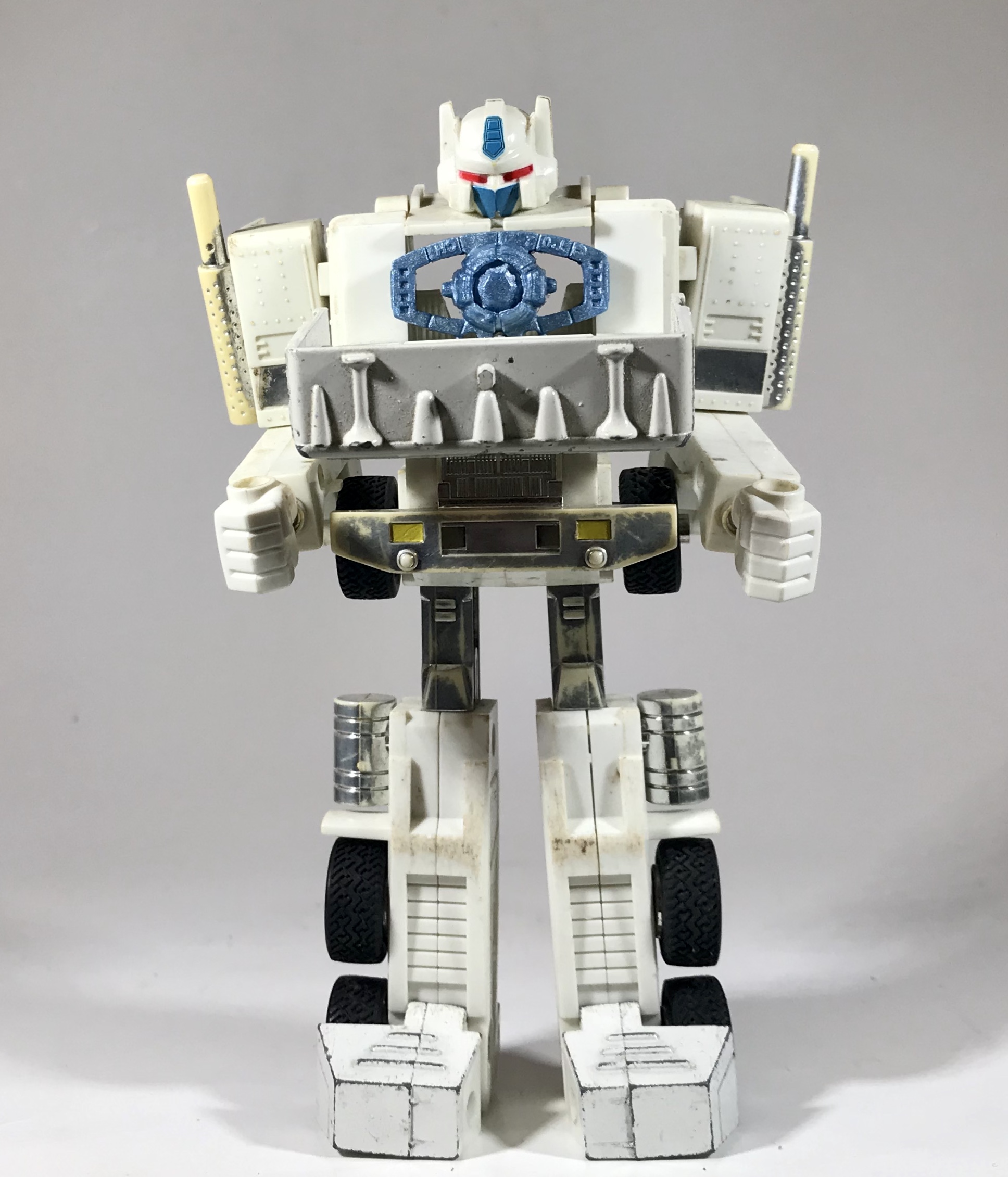 The other Matrix Matt sent really steals the show, though. It glows in the dark! 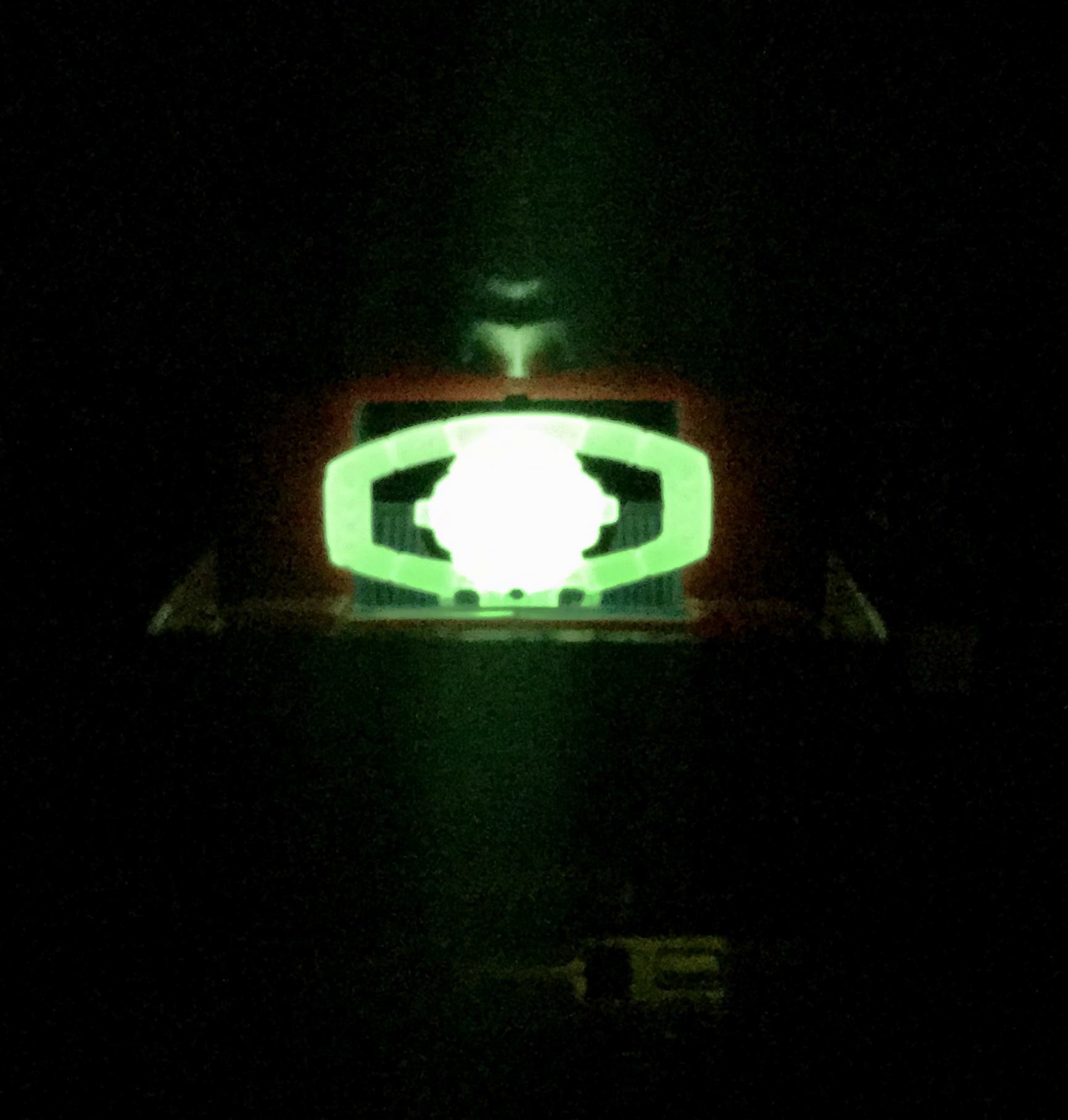 You can still see it nicely when the figure’s front window section is closed:

The glow on this Matrix is so strong that you can even see it under normal lighting conditions. Hot diggity damn!

I absolutely adore this GITD Matrix of Leadership. It’s going to stay with my main G2 Optimus Prime permanently.

Speaking of G2 Prime, these pieces Matt sent along were extra thoughtful. My main G2 Prime had many of his parts, but he was missing both Roller and the gas pump. Now he has both!

Roller is cast in both colorless clear and clear yellow plastic. 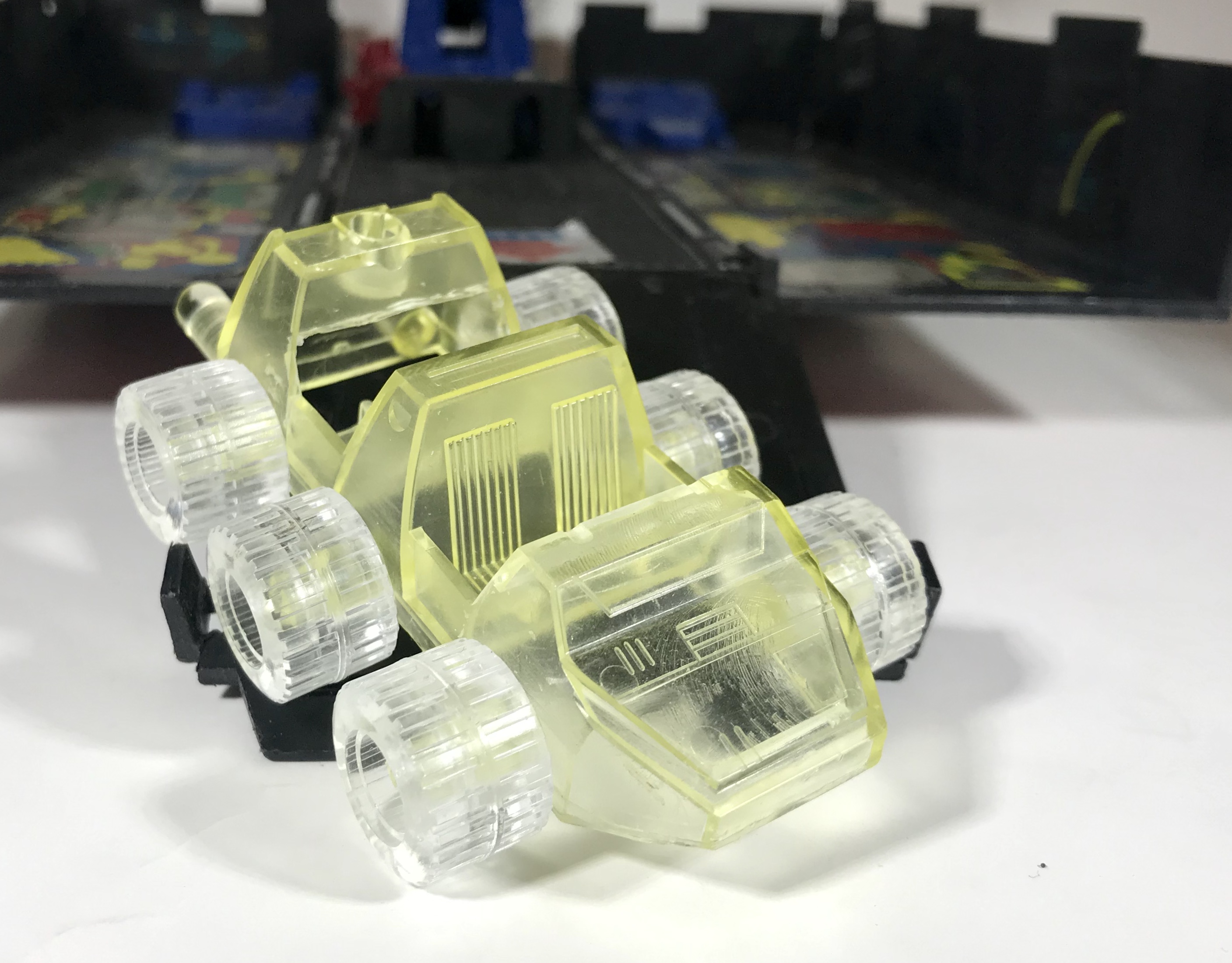 In my mind, this color scheme is even more “G2” than the blue Roller that originally came with the figure.

Look how perfectly he goes with Prime’s combat deck: 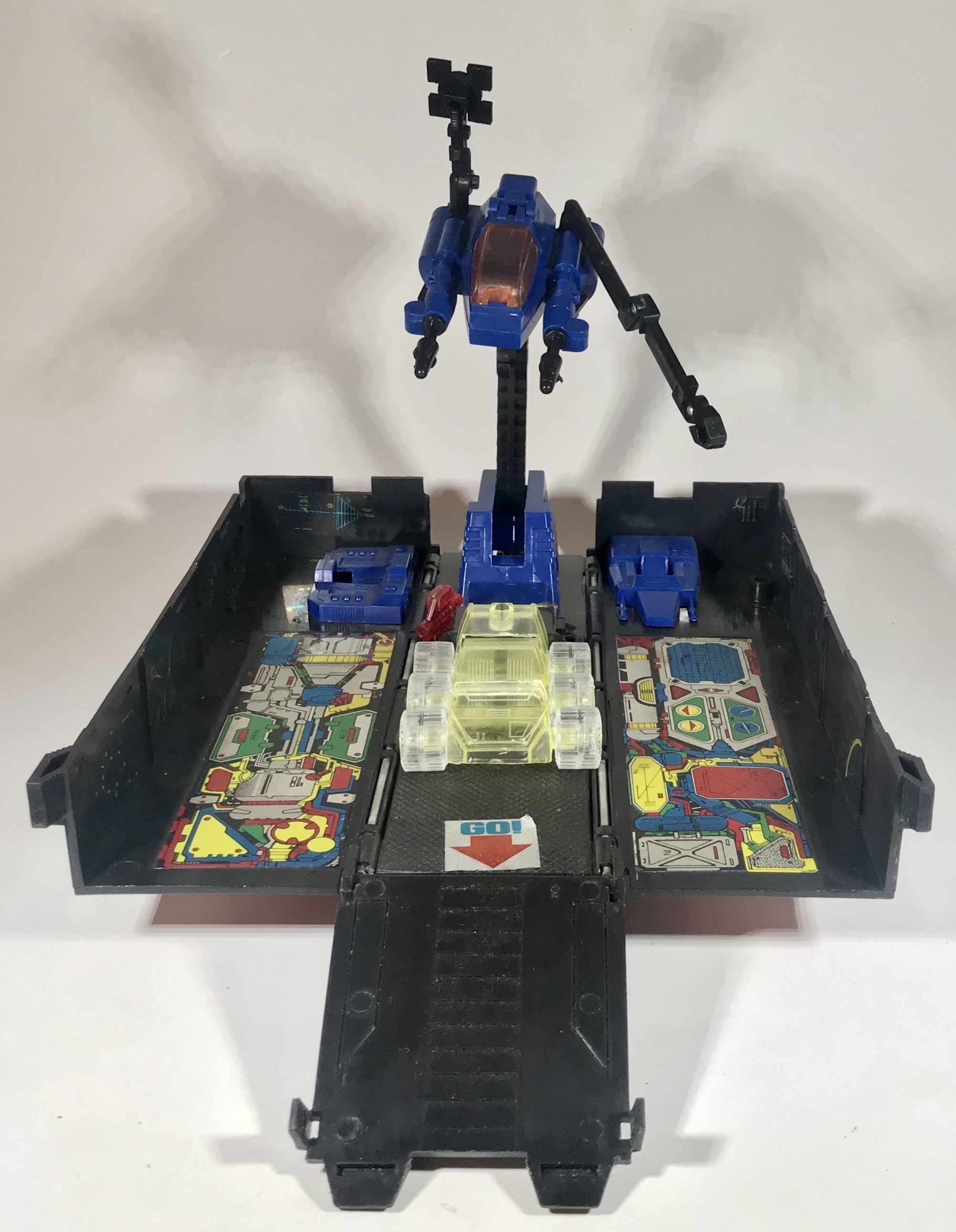 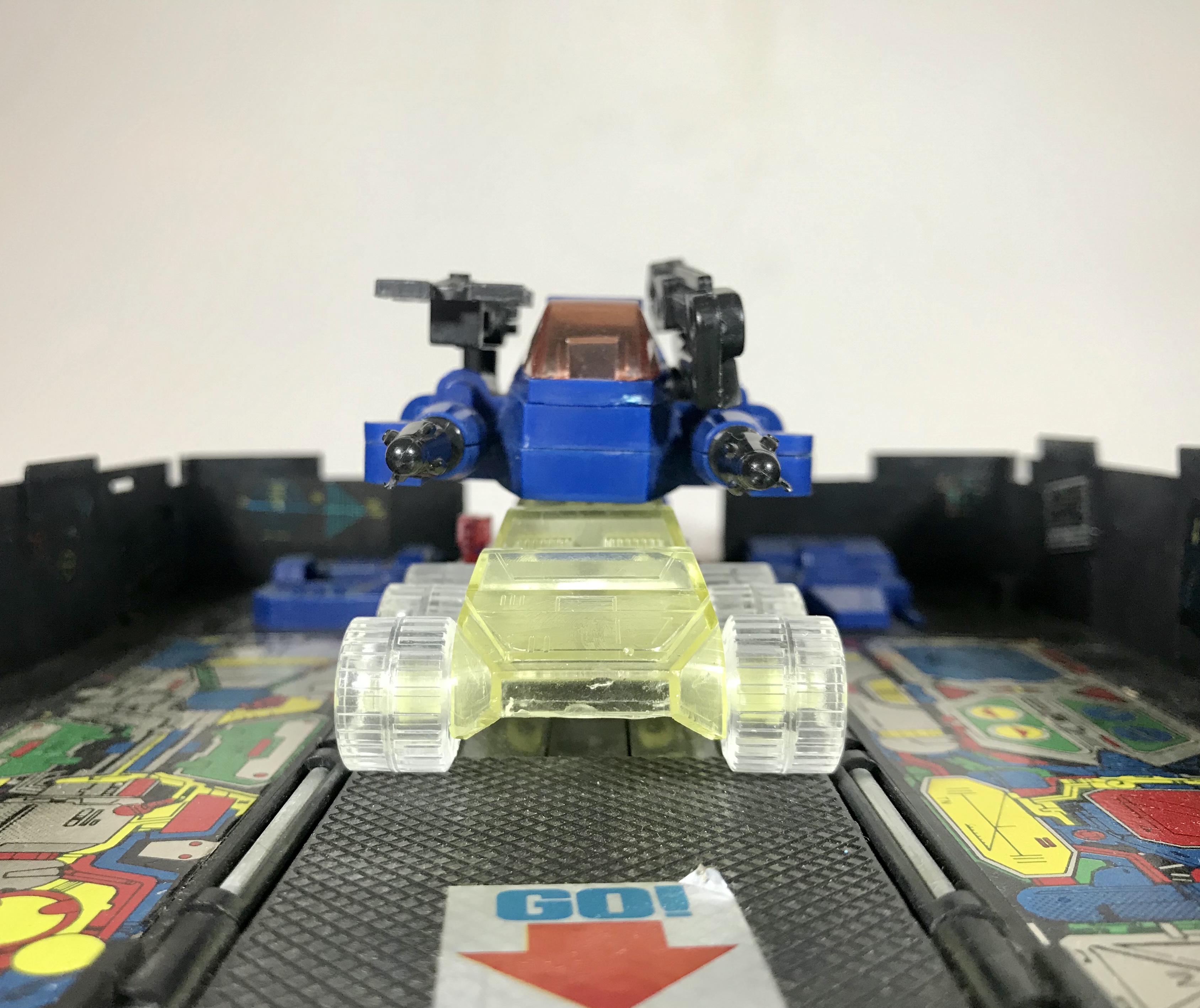 You can see the clear red gas pump in that last photo. It fits well on Roller, and it also looks great with the combat deck:

Prime can hold it, too, if that’s the sort of thing you’re into. 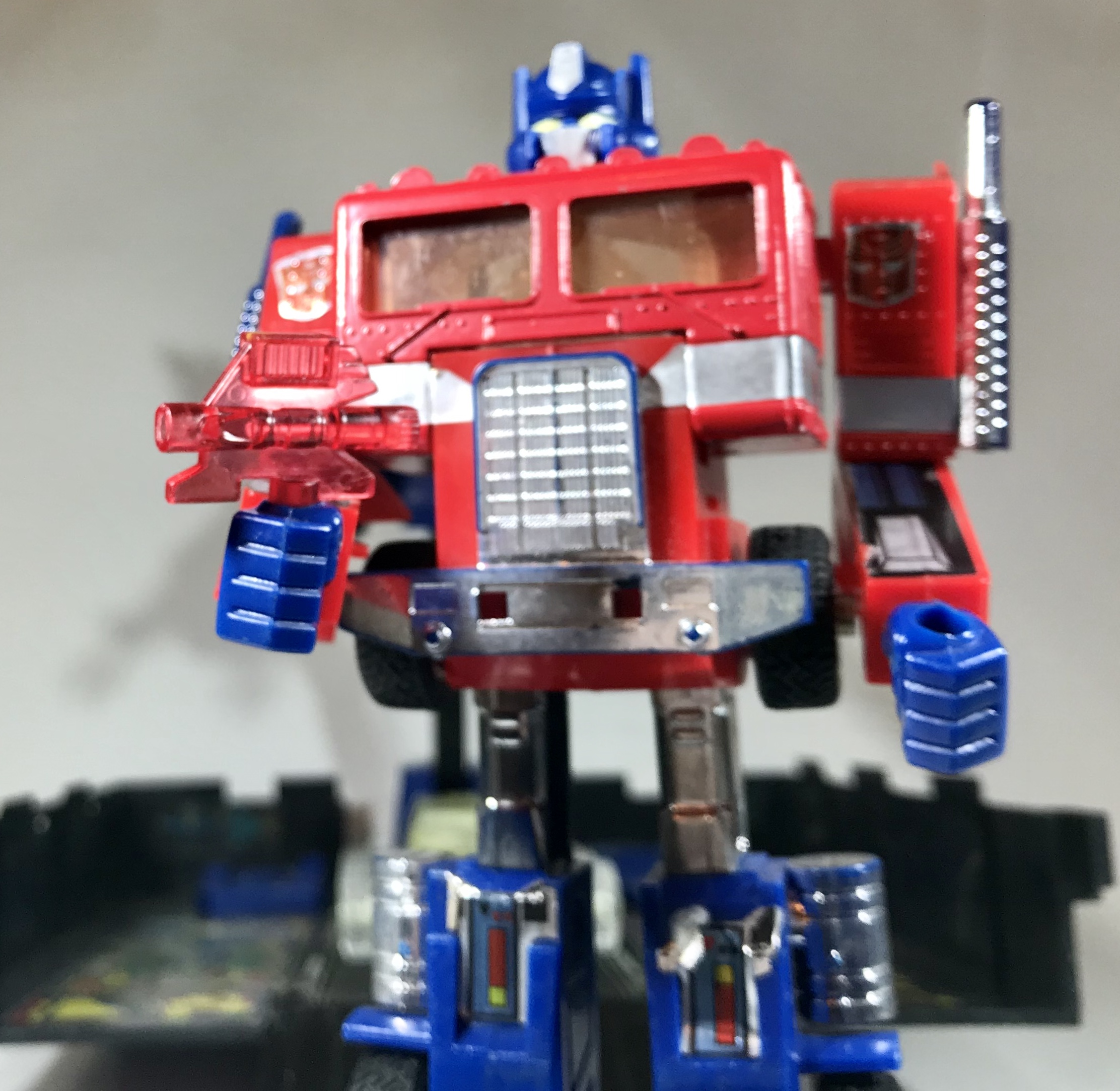 For this piece, Matt casted a part made by Trent Troop. This part is generally 3D printed, and is just one in Trent’s large series of replacement Titan Master faces. Basically, you can take any Hasbro Titan Master, remove a screw, place one of Trent’s custom face plates on it, and screw it back together. As long as you have painting skills, you have a whole new Titan Master.

This exact item was actually Matt’s prototype for his run of these Titan Masters, so it’s extra cool to have.

Impressively, this repro piece functions just as well as a Hasbro Titan Master, and retains all articulation and can plug into any Titans Return figure as a Headmaster unit. 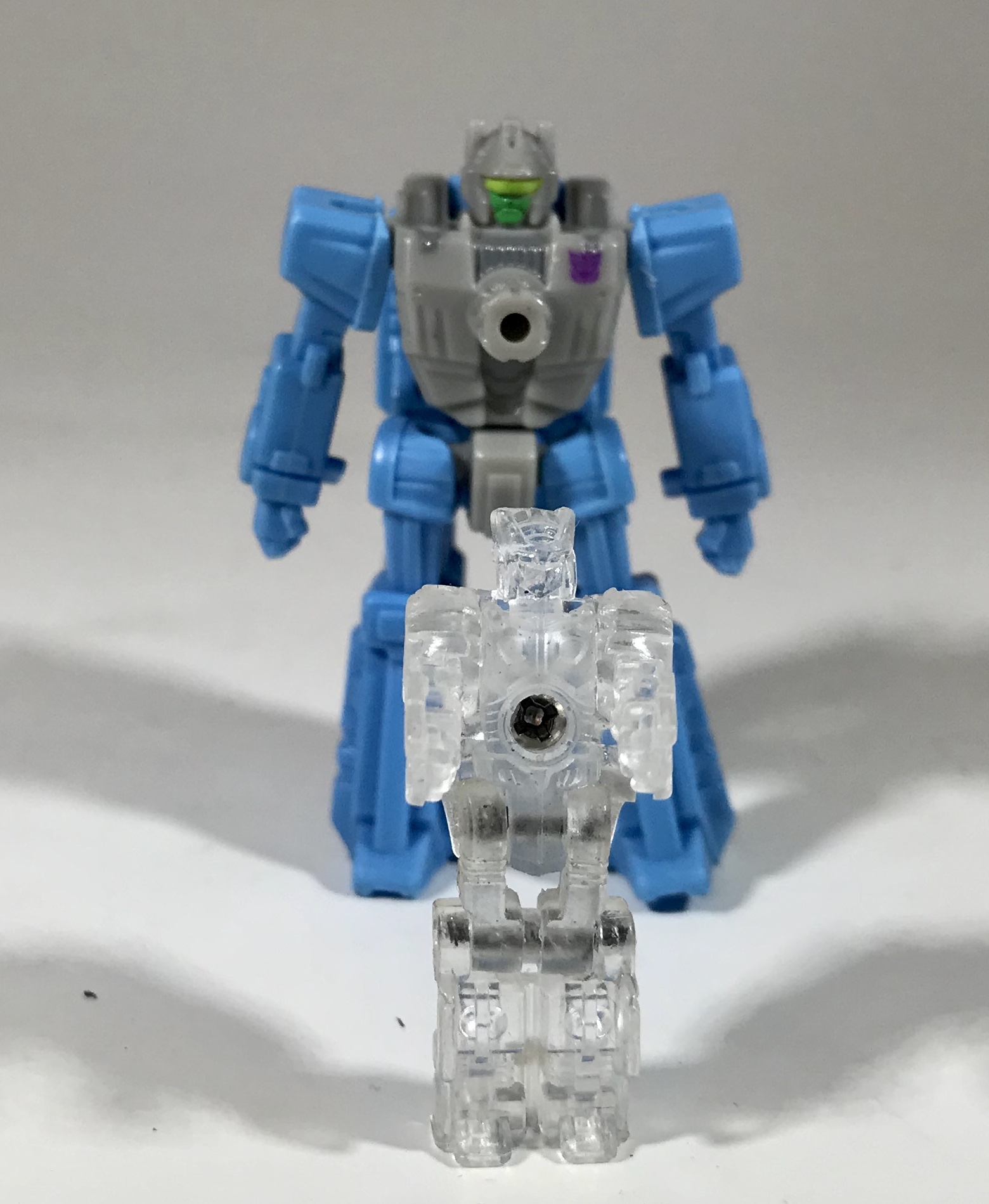 He even fits perfectly inside Triggerhappy’s cockpit! 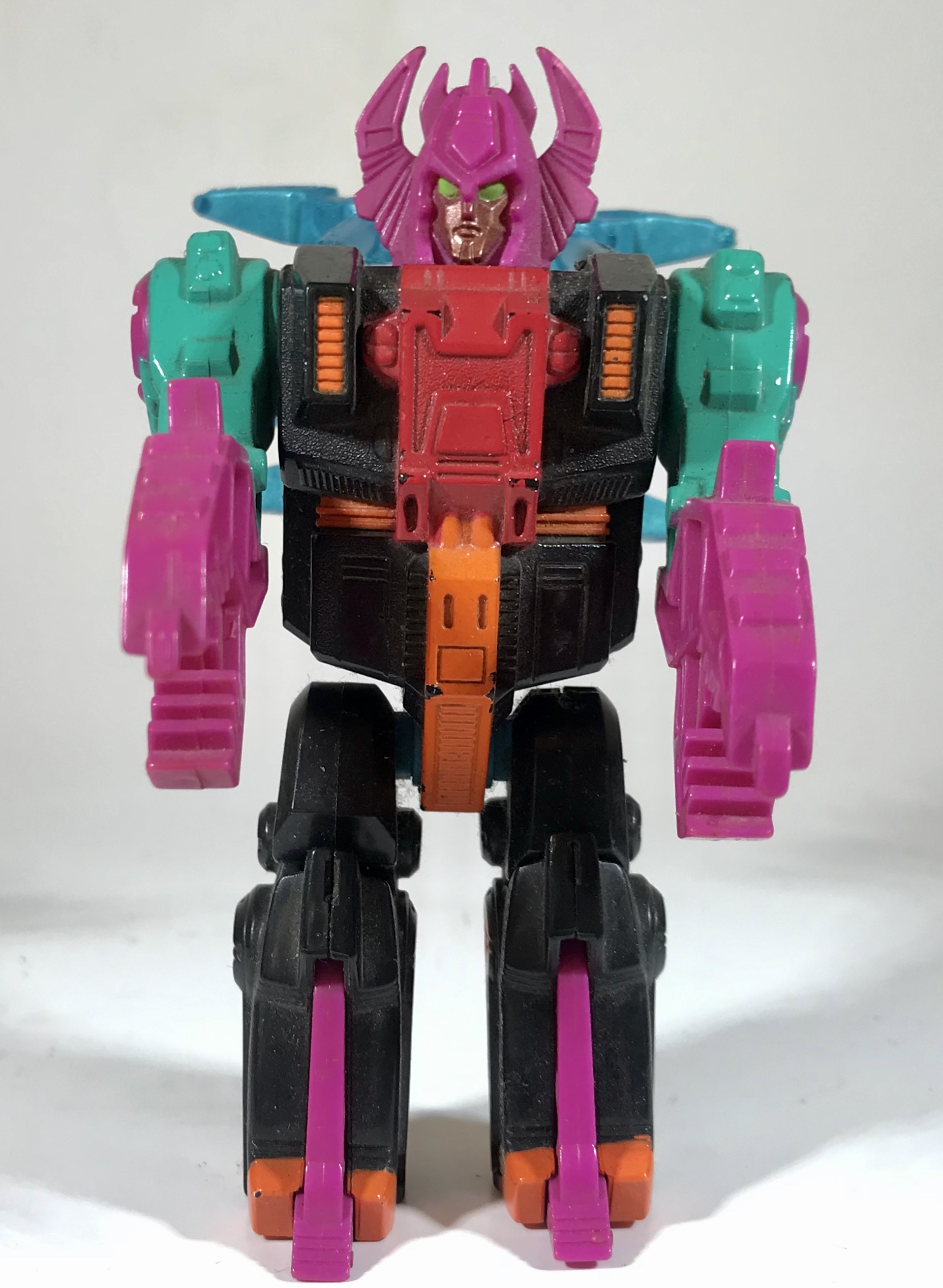 If you live in the States, the European Action Masters are very hard to find. Unfortunately for me, I love Action Masters with every fiber of my being, so I’ve been on a quest to track them all down.

At some point, I decided it was better to buy incomplete Euro Action Masters in decent condition than to wait for mint, complete versions that never come along. And that I can’t afford.

Anyway, because he is a rudely psychedelic GI Joe sized Scorponok, I had to have Double Punch. I found one a couple of years ago, but he was missing his scorpion legs– which are basically the only accessories he came with.

Double Punch is an Action Master Elite, which he means he “transforms.” By lying down on his face. But the scorpion mode is even less convincing when you don’t have the legs. But now I do.

Bask in their glory: 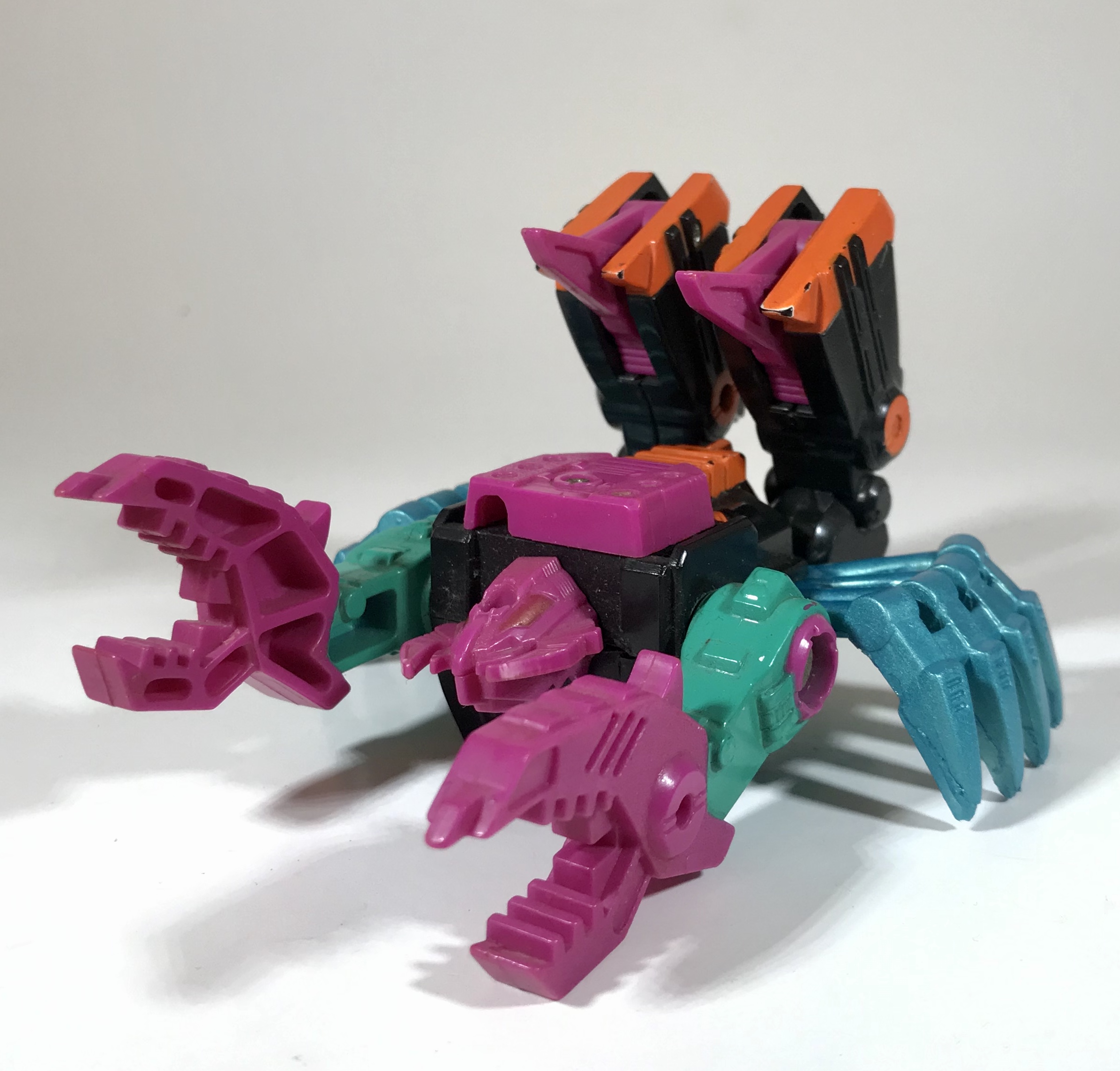 Much like Euro Action Masters, Beast Wars Metals Ravage (or Jaguar in Japan) is expensive and hard to find. The toy was only released in Japan. And, because Ravage was part of a fan favorite Beast Wars arc, that drives up prices even more.

I was fortunate to find a pretty nice one last year. I got him for a relatively good price because he was missing his tail. The toy is a remold of Transmetal Cheetor, who could use the tail piece as a whip-type weapon. Ravage can’t really hold the tail as a weapon, but it does complete his look in both beast and robot modes.

This tail is cast in black plastic, whereas the toy’s original tail was cast in grey. You really can’t confuse the two– but the black basically looks perfect with the figure. 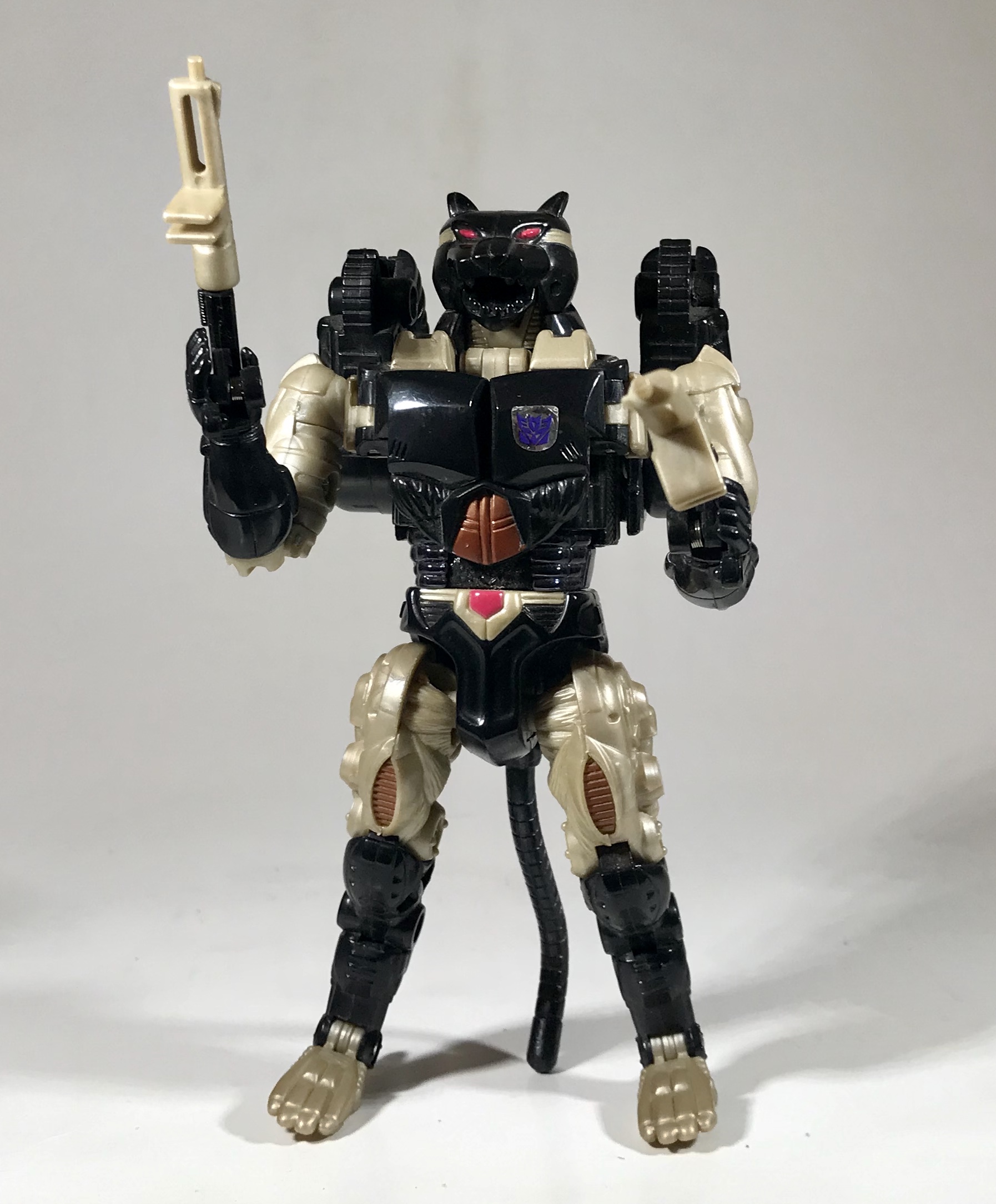 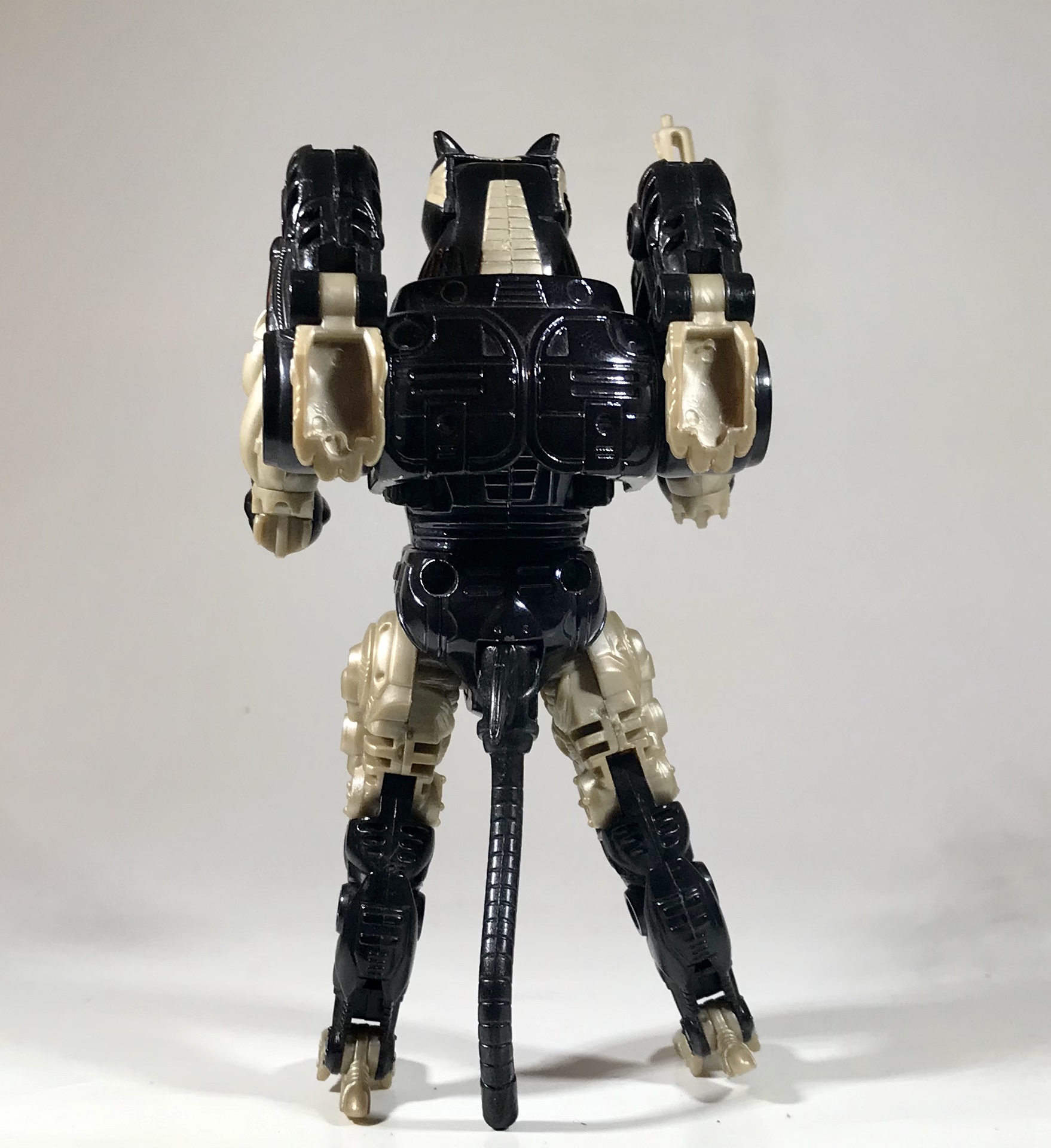 The tail plugs in perfectly and just looks like it belongs there.

I had never transformed this toy until taking these photos. In the Beast Wars cartoon, Ravage transformed into a cassette tape– he never had this Transmetal jaguar mode. It also looks pretty awkward thanks to how the robot arms have to be positioned.

I will say, though, that having a proper tail makes this beast mode way more appealing. 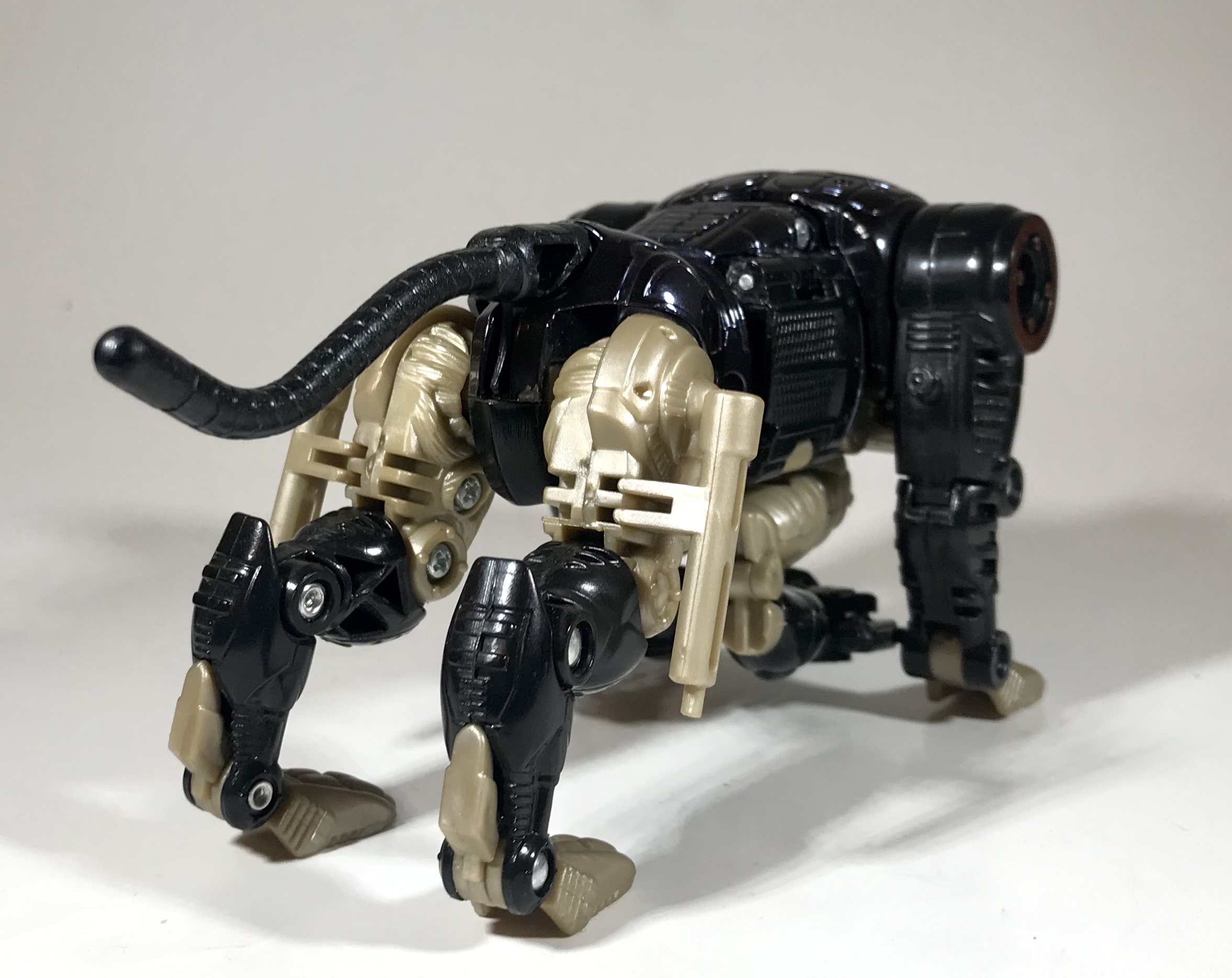 What are your dream repro accessories? Which toy parts have you been trying to hunt down for years? Also, di I miss anything on my new Russian Funskool GI Joe profiles? Let me know in the comments!