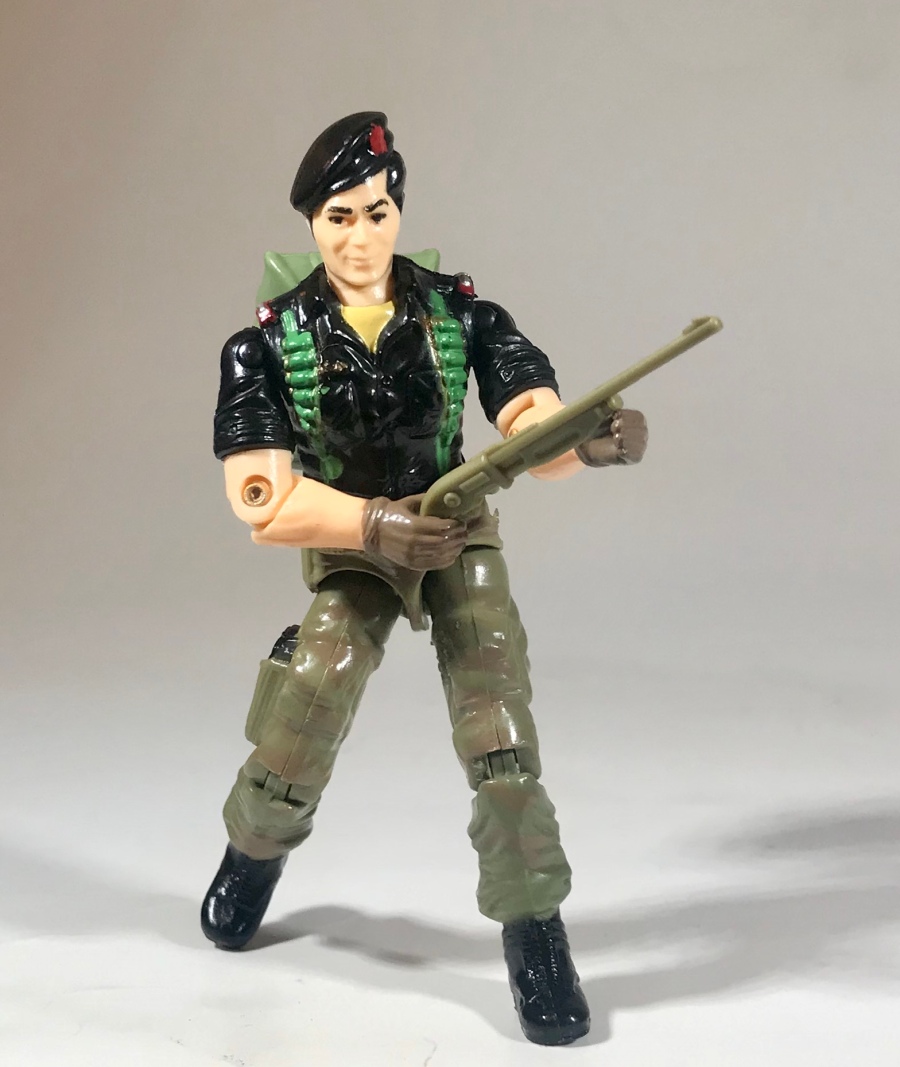 This Russian Funskool Flint figure was released around 1998. It is identical to (one variant of) the Indian Funskool release. Only the card back is different.

The Russian Funskool GI Joe Flint is based on Hasbro’s Flint from 1985. The Funskoool figure uses mostly the exact same mold and accessories– for the most part, only the colors and plastic quality are slightly different.

The Russian Funskool Flint uses the lower arms from Zandar. There were some other variants with different arm parts in the Indian Funskool line, but I believe all Russian Flints use this parts configuration. See this post at Forgotten Figures for a rundown of all Funskool Flint variants. 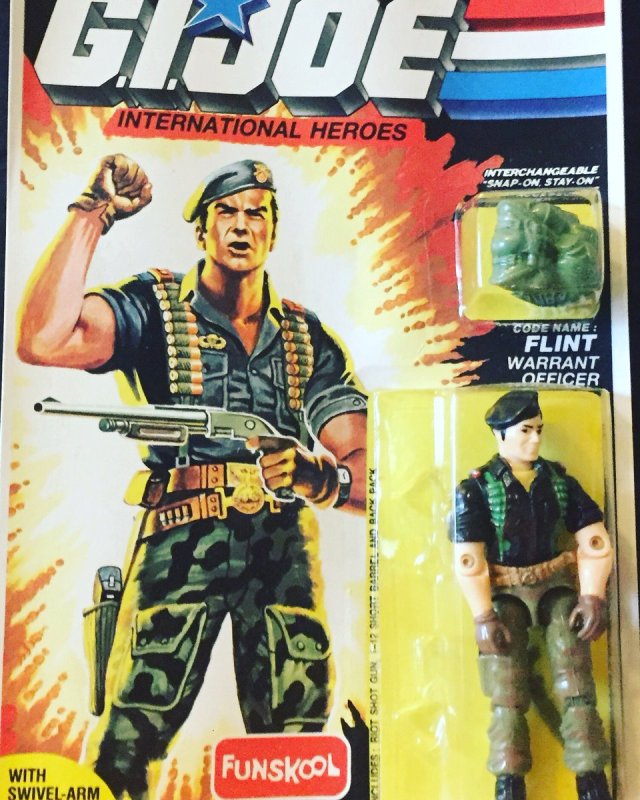 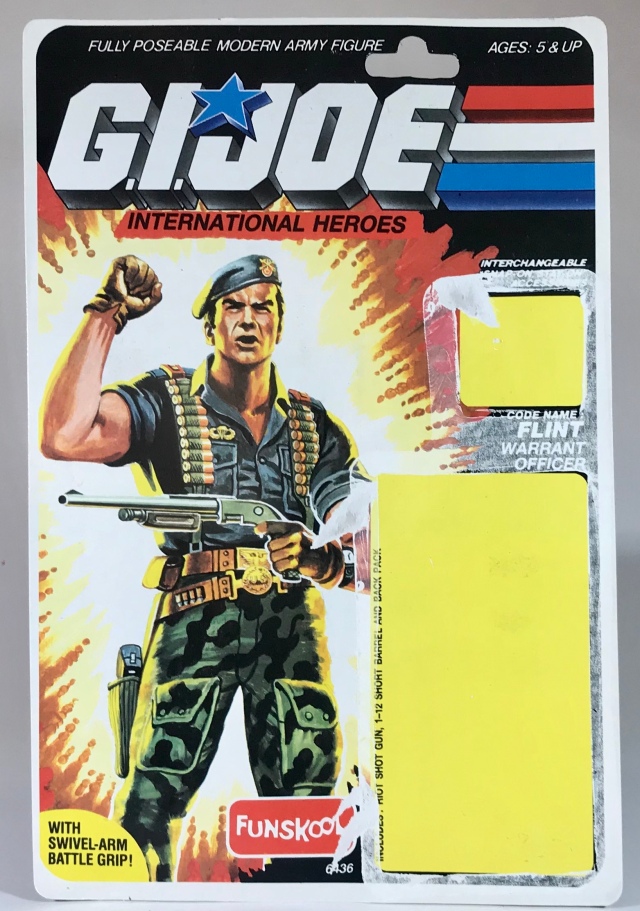 Note the “swivel arm battle grip”  call out. All Funskool GI Joe figures had this feature, but I guess they had to put some selling point on the packaging.

Note that unlike Indian Funskool card backs, this card back is printed with all Russian text. 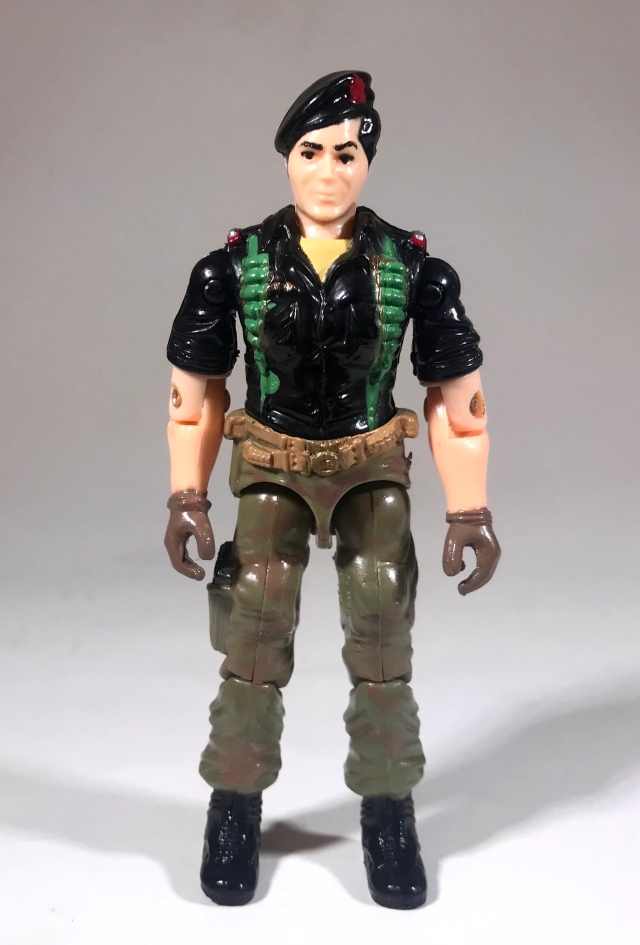 Russian Funskool GI Joe Flint is mostly cast in black and dark green plastic. This figure looks quite similar to the Hasbro release, as far as Funskool figures go.

The green paint apps for the shoulder straps are fairly sloppy, which is not unusual for Funskool figures. 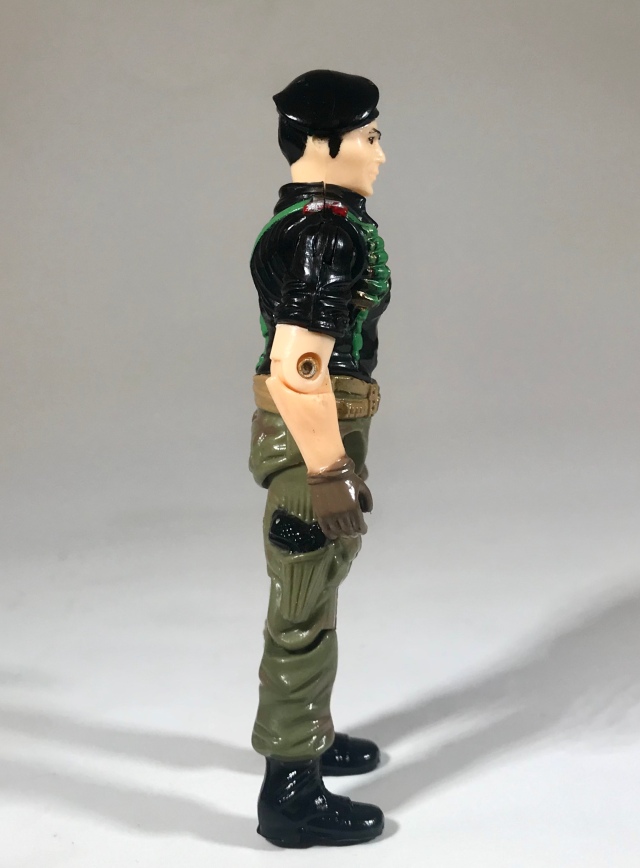 Here you’ll note that the pistol handle is picked out in black paint, as well. 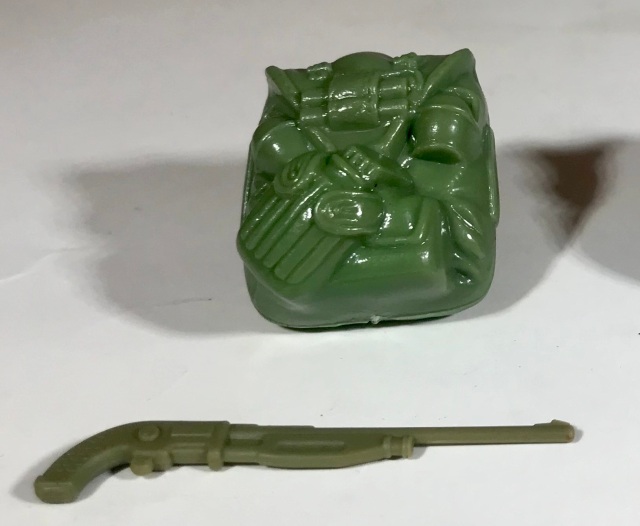 Russian Funskool Flint’s accessories are very straightforward. He comes with a green backpack and a green pump shotgun. That’s a notably small amount of accessories for a Funskool figure released in 1998, but it is true to the original Hasbro Flint release. Each accessory uses a different shade of green, but they both look good with the figure.

In all but color, these accessories are identical to what came with the Hasbro version.

The figure All Geared Up: 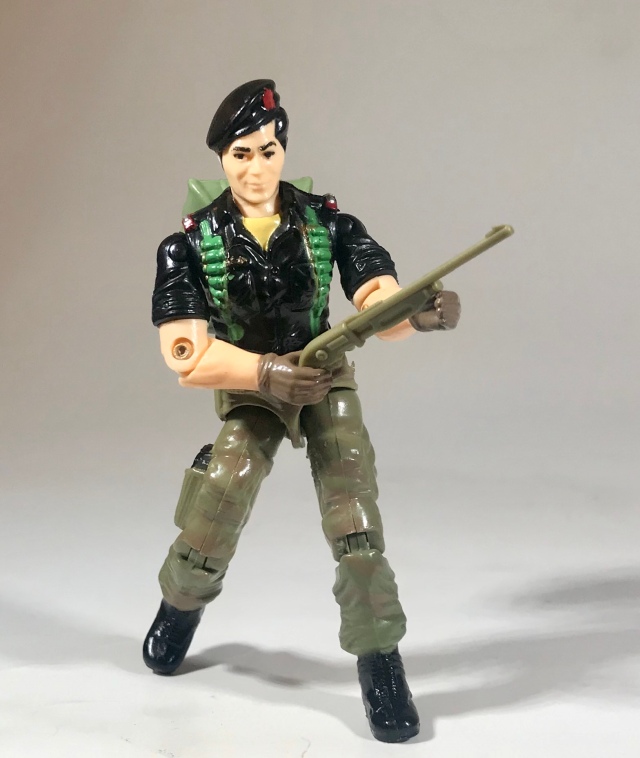 Despite being made of slightly lower quality plastic than the Hasbro version, the Russian Funskool Flint is still a solid GI Joe action figure. It retains all articulation and features the Hasbro version had. The figure holds its gun well and the backpack fits nicely. Other than a little paint slop, this is a quality Funskool release.

Funskool Flint and Hasbro Flint are fairly similar, but a few color changes and paint applications make them easy to tell apart if you know what you’re looking for. 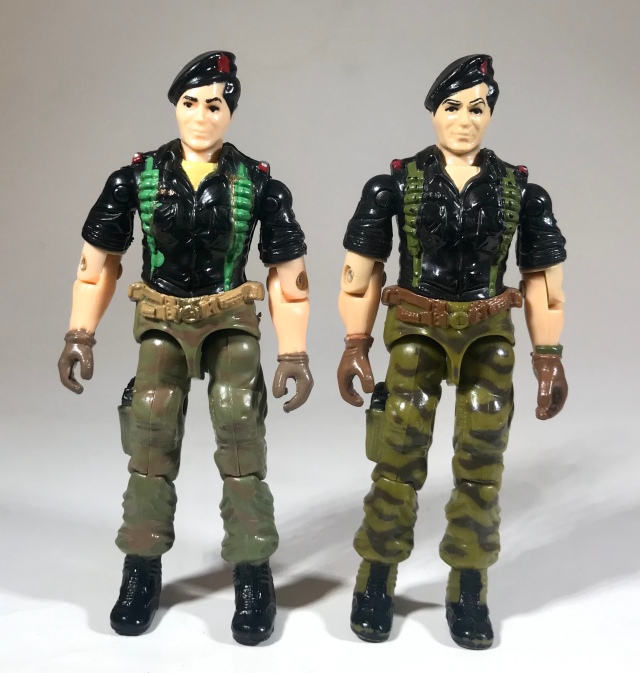 The first thing you’ll notice is that the Funskool version’s legs are much lighter and less saturated than the Hasbro version. The camouflage is also less noticeable on the Russian Funskool figure.

Russian Funskool GI Joe Flint’s belt is a more tan color than the Hasbro’s brown, and the Funskool figure’s gloves use a lighter brown, as well. The Funskool figure is also missing the paint applications on its boots.

Russian Funskool Flint’s chest straps are a medium green, which looks much different than the Hasbro version’s dark green. Additionally, the skin shown on the Funskool figure’s torso is not a good match for the skin tone on his head– it looks like he is wearing an off white or light yellow t-shirt underneath his uniform. It’s still a good look, but the paint matching is poor.

The biggest difference between these figures is the lower arms. The Russian Funskool Flint uses the lower arms from Hasbro’s 1986 Zandar figure. That means it doesn’t have a sculpted wrist watch, but the overall look is quite similar. 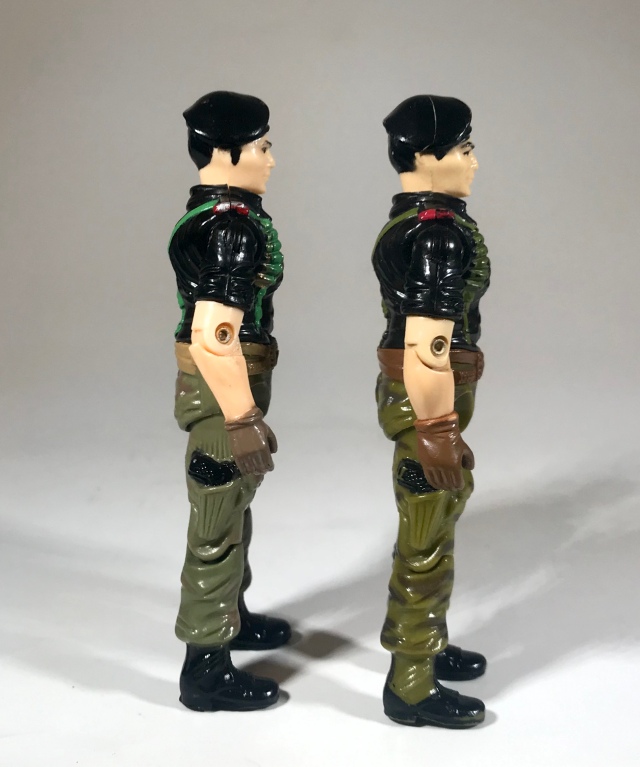 The Funskool version has some (somewhat strange) additional silver paint applications around the red shoulder details. 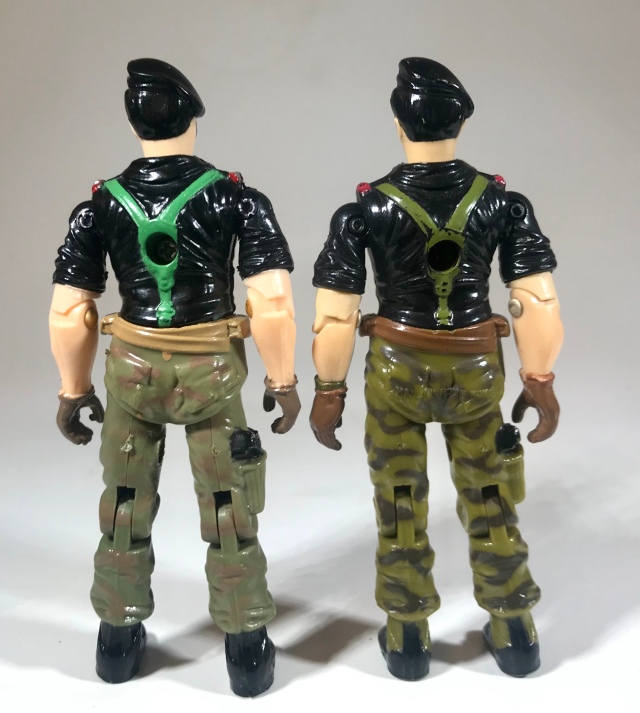 Hasbro Flint has a date stamp on its rear end, whereas the Russian Funskool version does not. Why that’s the case is anyone’s guess. 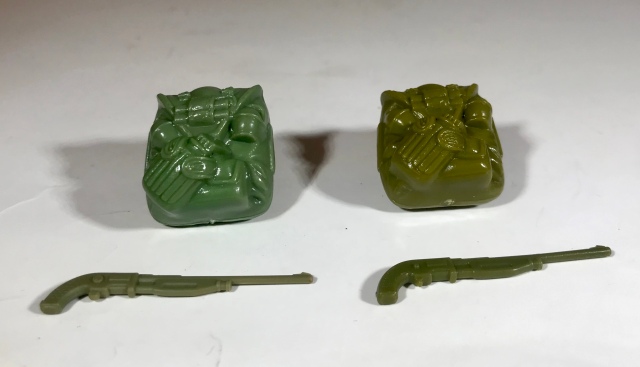 While they are all green, the colors on the Funskool Flint’s accessories are quite different from the Hasbro version. It might be a bit difficult to tell which one you’re looking at without having the other to compare, however.

The figures All Geared Up: 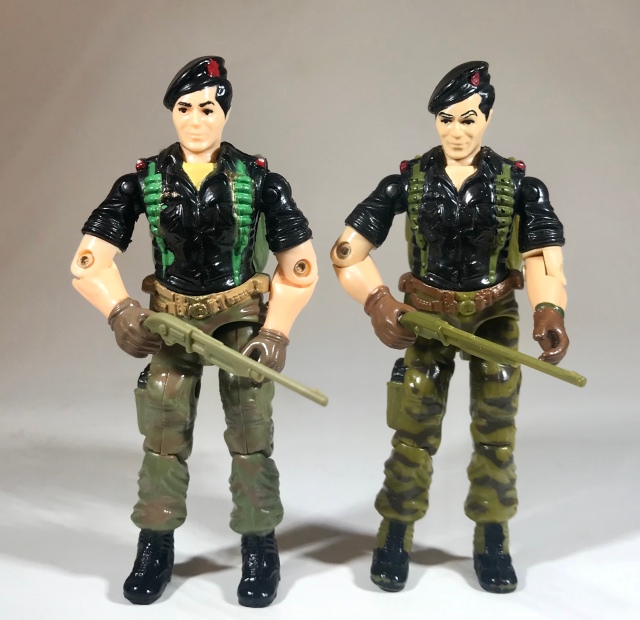 Just for fun, here’s (from left to right) Russian Funskool Flint, 1985 Hasbro Flint, 1988 Hasbro Tiger Force Flint, and Hasbro 2005 comic pack Flint. I should have included the TRU Exclusive Night Force version in this photo, but I guess he was too good at hiding in the shadows. 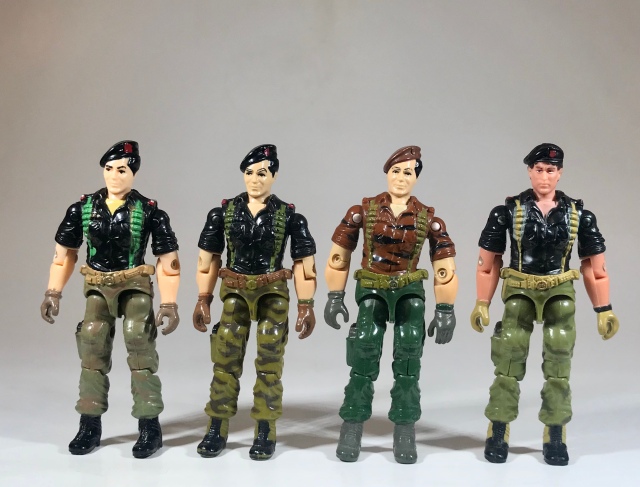 Did I leave anything out when it comes to Russian Funskool GI Joe Flint? Let me know on social media or through this website’s contact form.

“Hello I am a kindly nobleman and this is my friendly wrestler bodyguard… ha ha ha just kidding WE’RE GALL DANG SNAKE PEOPLE” #motu
Toy of the Day #10: RID Spychangers Crosswise and WARS. Crosswise is the prettiest Spychanger with the coolest mold. WARS is a hilarious brutish nascar. Hard to go wrong with this one. #transformers #rid2001 #spychangers #tdftotd
Join me for a look at one of my favorite 90s vehicles-- the 1993 Ice Snake! Link on my bio. #GIJoe #gijoecommunity #gijoeunion #yojoefans #surveillanceport #gijoenation #toygroup_alliance
Toy of the Day #9: Chakan, a Glyos compatible fella made in part (at least?) by Toy Pizza. Sadly he’a not Chaka Khan. He’s from a video game I’ve never played. I just thought he was a cool weirdo. I like his hat and weapons. He can really only hold one at once, though. #glyos #toypizza #knightsoftheslice #chakan #tdftotd
Toy of the Day #8: Power of the Primes Windcharger. He’s totally adequate, but not the best toy. And he’s no Tailgate. I did get him some little handheld electromagnet pieces from Shapewaya though. #transformers #tdftotd
Cobra Cold Weather Forces. My Give A Damn didn’t extend far enough to find all of their accessories (if I even have them) but I thought you might enjoy seeing them anyway. #GIJoe #gijoecommunity #gijoeunion #surveillanceport #yojoefans #gijoenation #toygroup_alliance
Toy of the Day #7: Shark from Lanard’s Corps! Animal Patrol. I’m pretty sure I have the parts to fix him up, but this is a super cool set either way. #lanard #thecorps #lanardcorps #GIJoe #gijoecommunity #tdftotd
The Sinister Snake Men #motu
#motu
Toy of the Day #6: Princess Leia as Boushh from Shadows of the Empire. There are technically better Leia figures, but this is still one of my favorites. Her cape likes to fall off, though. #starwars #potf2 #shadowsoftheempire #princessleia #tdftotd
It hardly knows it's alive
Today on The Dragon Fortress, @doksewage shows us his original childhood Steel Brigade figure, complete with paperwork. Link in my bio! #GIJoe #gijoecommunity #surveillanceport #gijoeunion #gijoenation #toygroup_alliance #steelbrigade