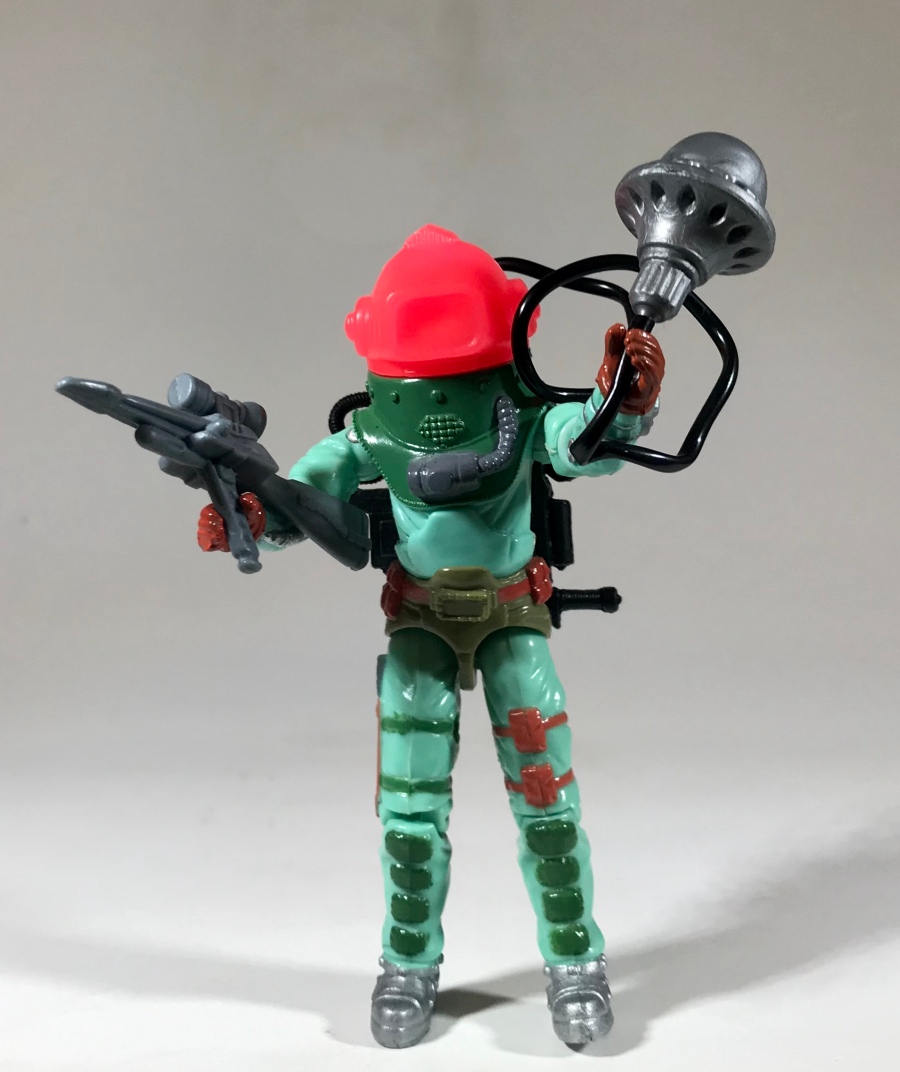 This Russian Funskool GI Joe Deep Six was released sometime around 1998, according to the translated card back. It’s possible that the Russian Funskool figures were released as late as 2003, so you might find toys released in any year during that time period.

This figure is based on Hasbro’s Deep Six version 2 from 1989. Only the colors and plastic quality are different. 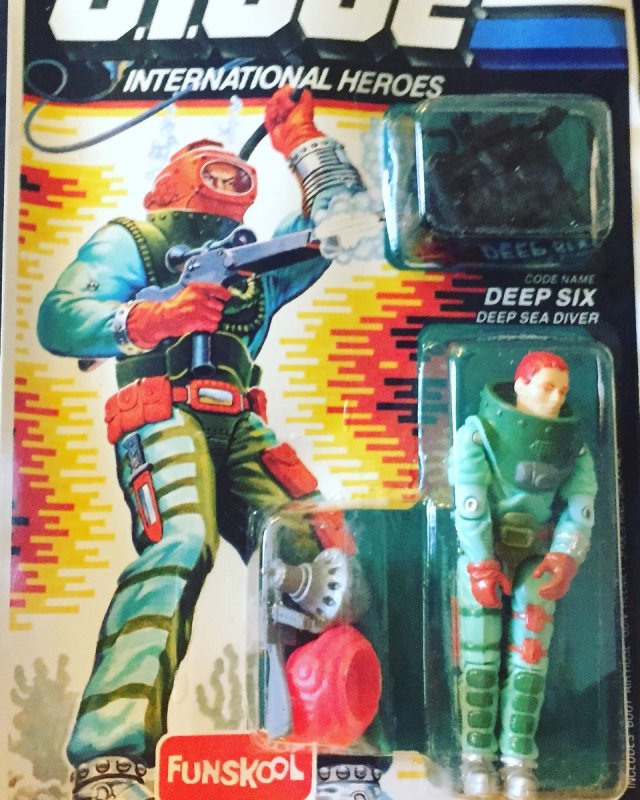 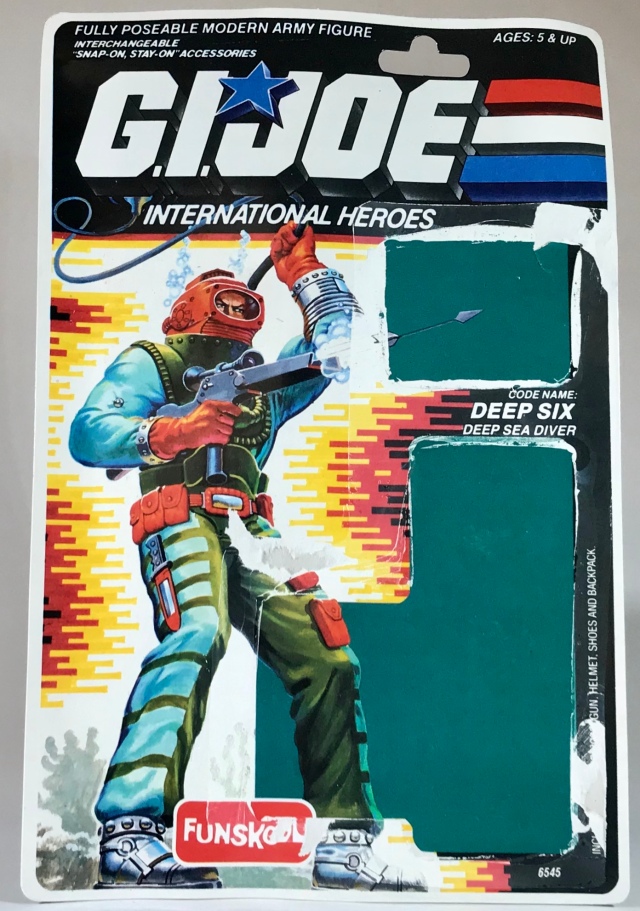 Card back (note the use of Russian language for the cross sells and file card– Indian Funskool cards used English): 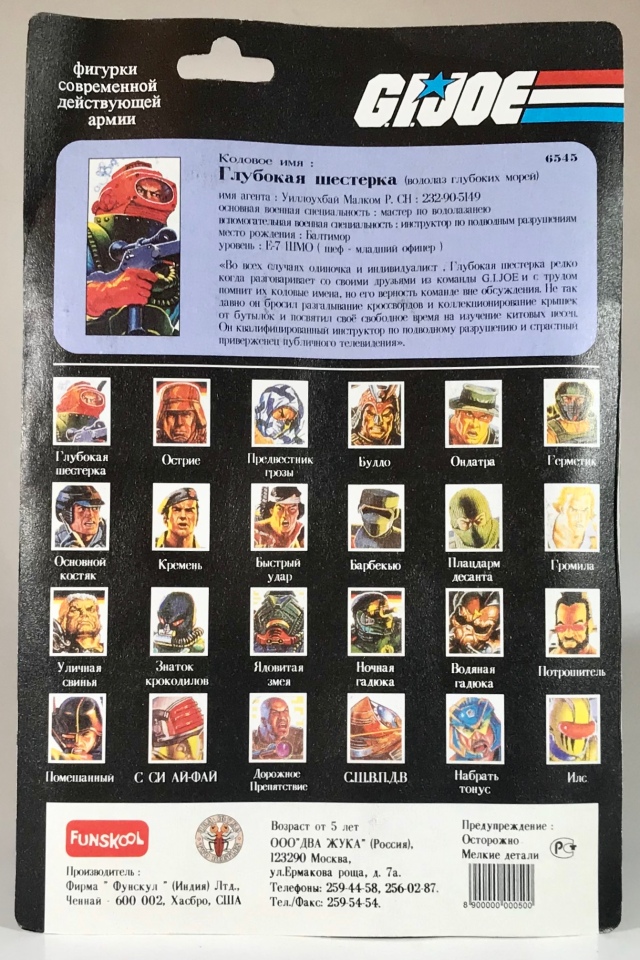 The card is printed on a fairly flimsy paper, as most Funskool GI Joe cards are. 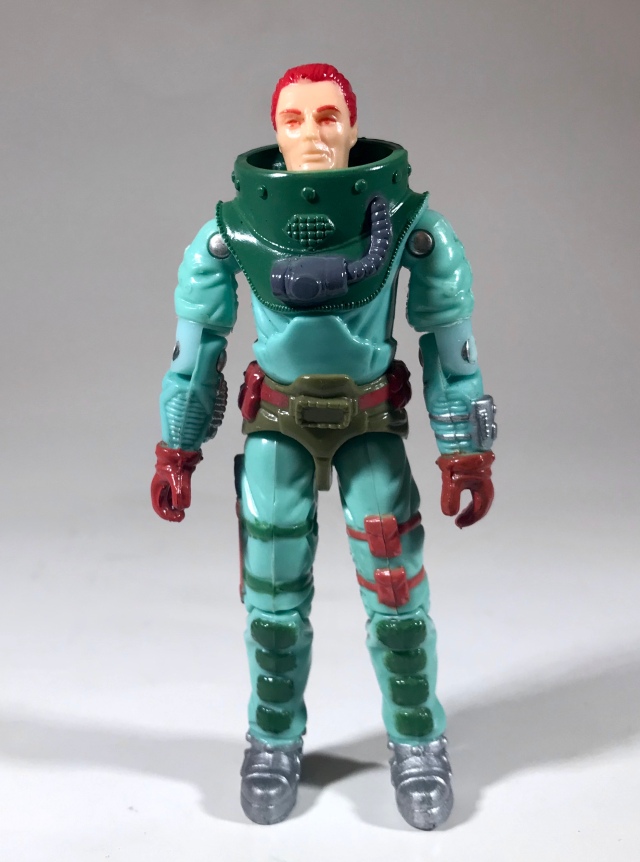 The Russian Funskool GI Joe Deep Six is pretty similar to the 1989 Hasbro version, but once you compare the two you notice the color differences. See below for comparisons.

The figure is cast in a green-blue plastic with dark green, dark orange, grey, and silver painted highlights. The waist piece is cast in an almost olive drab plastic– it’s likely meant to match the figure’s dark green highlights, but it’s not a very close match. 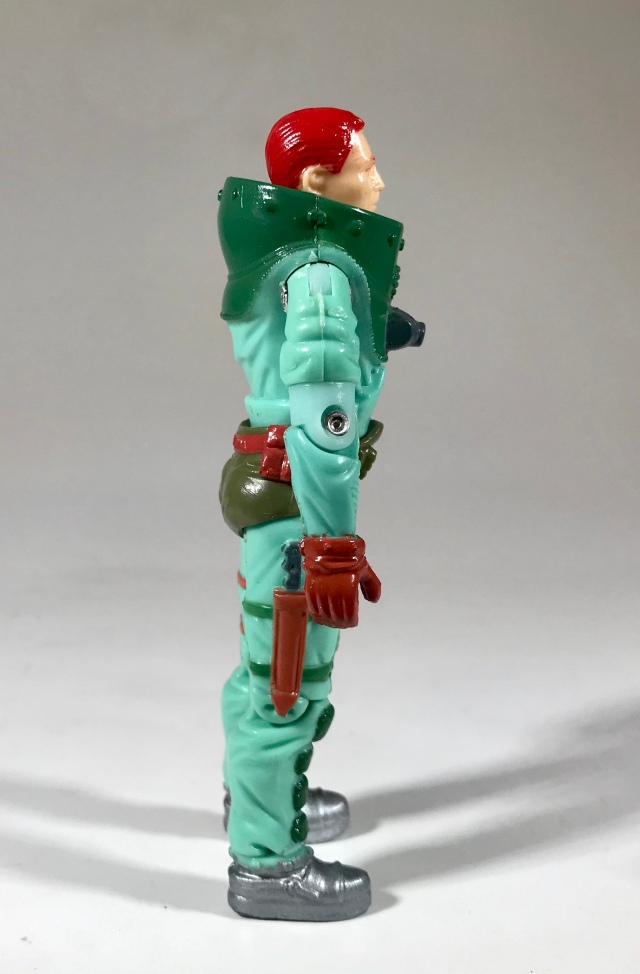 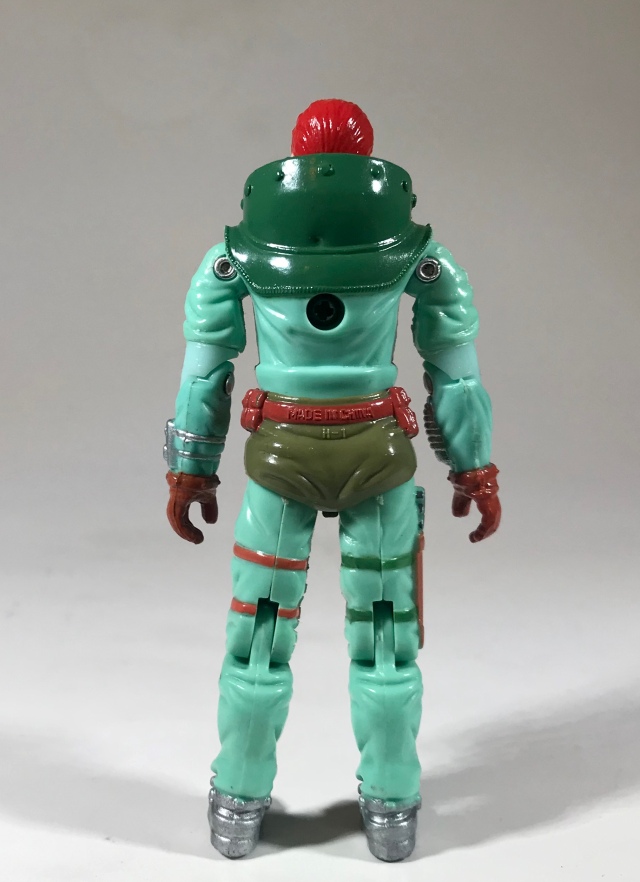 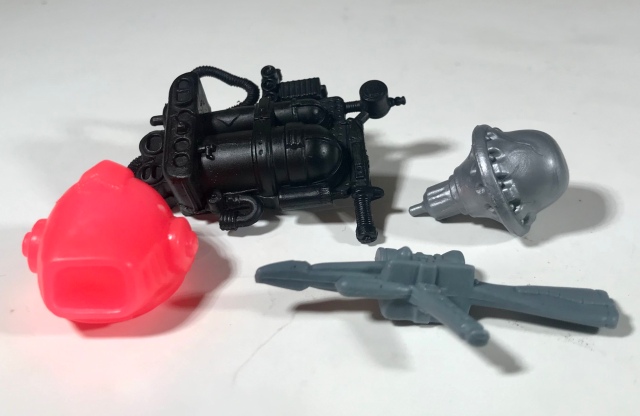 Russian Funskool Deep Six comes with a helmet, a harpoon gun, a buoy, a backpack, and a length of black hose. The hose is not pictured, as it’s a standard GI Joe hose and you know what those look like. It’s worth noting that Funskool hoses are often stiffer and harder to manage than Hasbro hoses.

A closeup of the helmet: 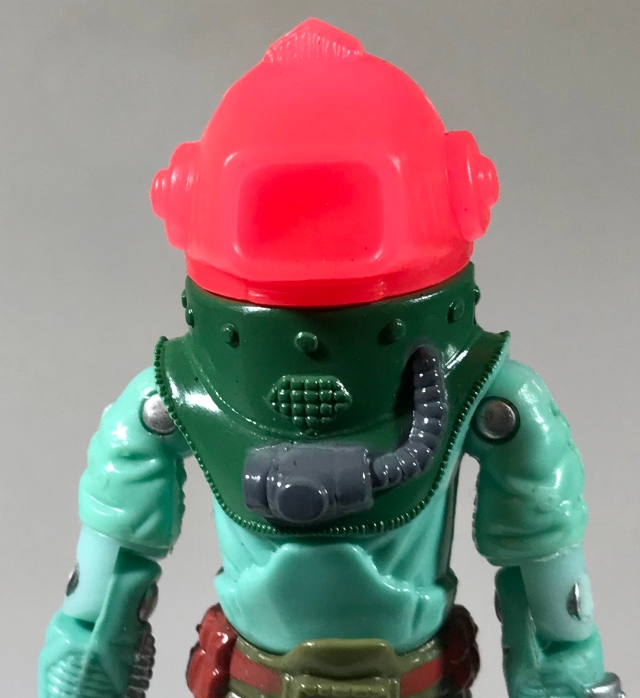 The helmet is cast in a bright pinkish-orange plastic. The plastic is slightly lower quality than the Hasbro version, but it gives the helmet an advantage– under good lighting, it seems to glow and radiate bright color. It’s a cool effect. 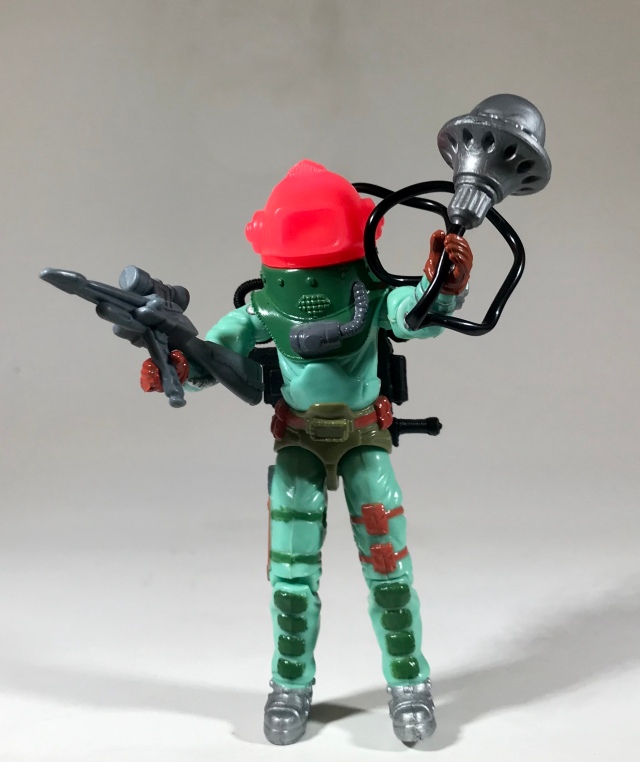 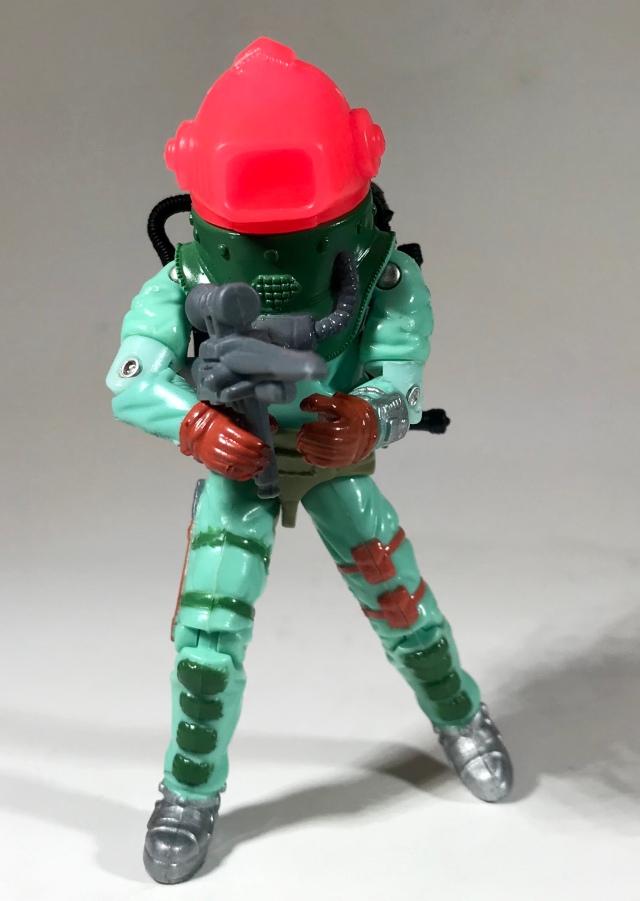 Though the plastic used on the Russian Funskool GI Joe Deep Six is of slightly lower quality than what Hasbro produced, it is still a nice figure. It retains all of the articulation and features of its Hasbro counterpart.

The joints are good and the accessories all fit the figure nicely. You will notice that one of the arm rivets was installed backwards, which maybe looks odd once you notice it, but doesn’t affect the figure in any real way. This is likely just a quality control issue on this particular figure and not a widespread issue.

You will see the slight differences in date stamps between the Funskool and Hasbro versions below. It’s not worth going in-depth with those. In these newer Russian Funskool profiles, I will likely omit date stamp info unless there’s something interesting to show.

Though the two figures have a similar overall appearance, there are many color differences between the Russian Funskool GI Joe Deep Six and the Hasbro version. 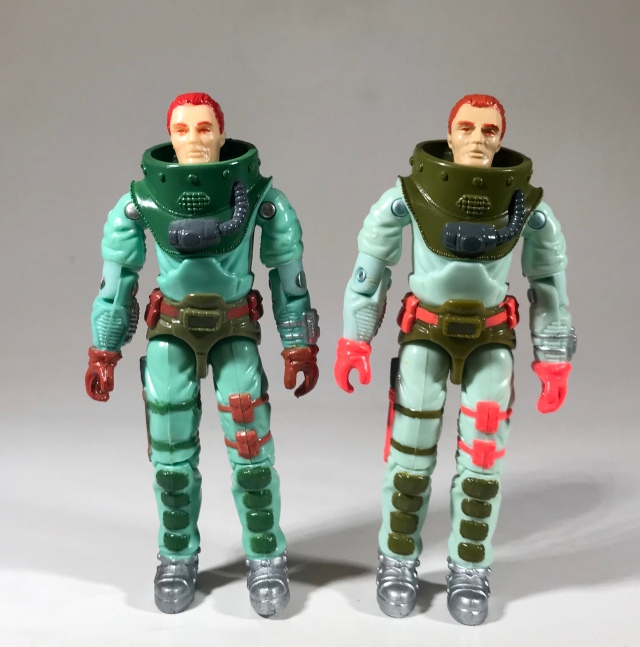 Starting with the head, you’ll note that both the skin tone and hair color are different on the Funskool version.

While the color layout is the same for both figures, the waist piece on the Hasbro version matches that figure’s green paint highlights more closely, but still isn’t exact. 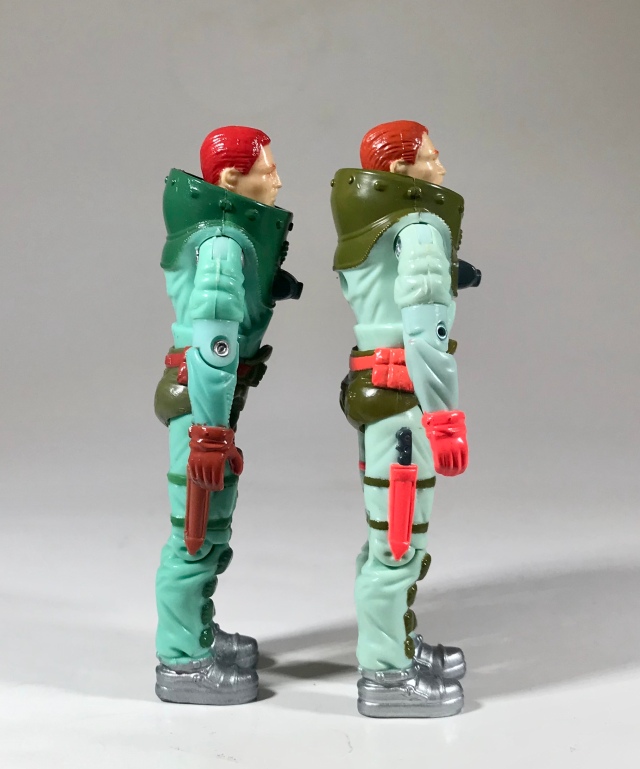 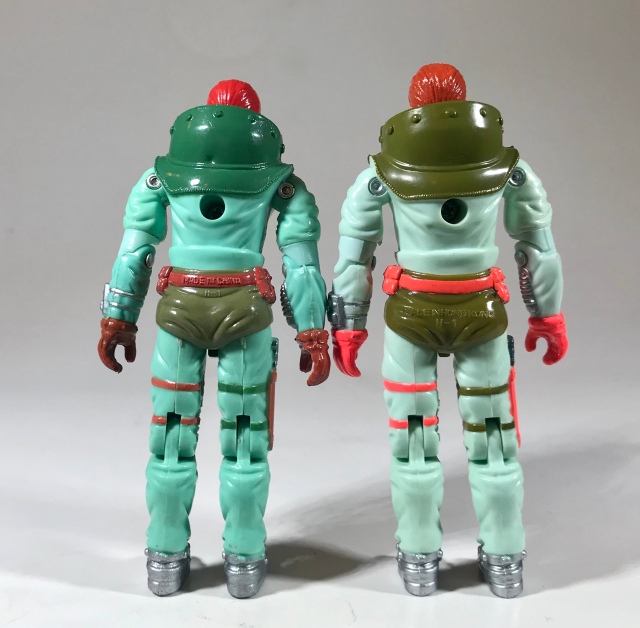 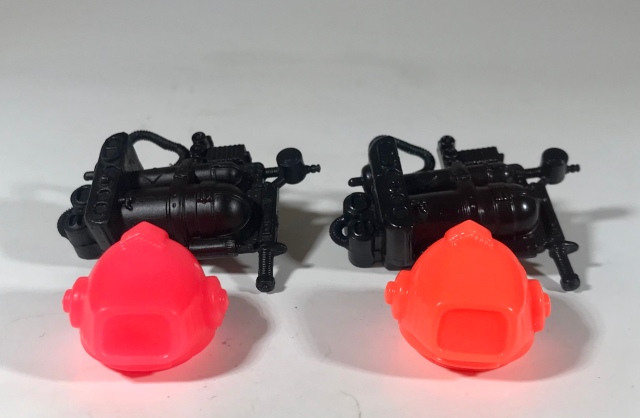 The Funskool helmet (left) is cast in a much more pinkish color than the Hasbro version’s bright orange. Due to the nature of the plastic Funskool used, it also lets much more light through.

The backpacks are nearly identical, but the Hasbro version uses a glossier plastic. By comparison, the Funskool version is duller and has an almost waxy quality. That’s not to say the Funskool version’s accessories aren’t well made– they work and hold up to play and display just fine.

I unfortunately do not have the harpoon gun or buoy from the Hasbro version to show you a comparison, but I imagine there are subtle differences.

The figures All Geared Up: 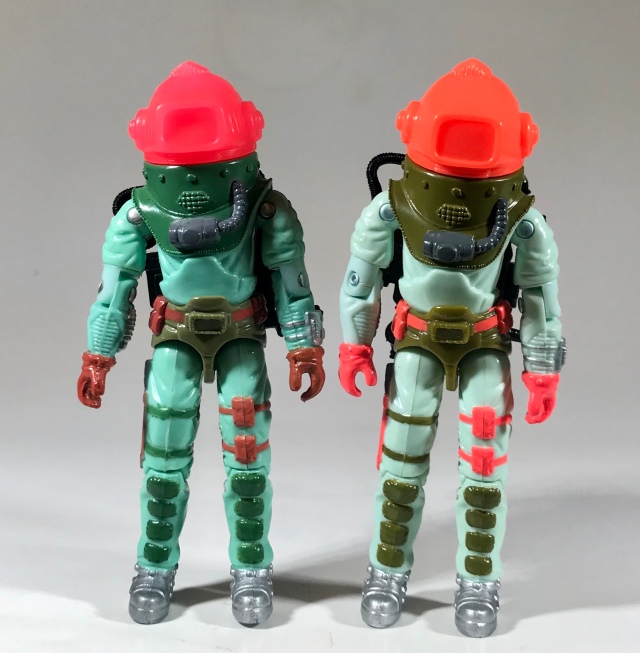 Hasbro used the 1989 Deep Six mold again in 1993 for a mail away figure. That 93 Deep Six is drastically different than either the Funskool or Hasbro 89 versions. 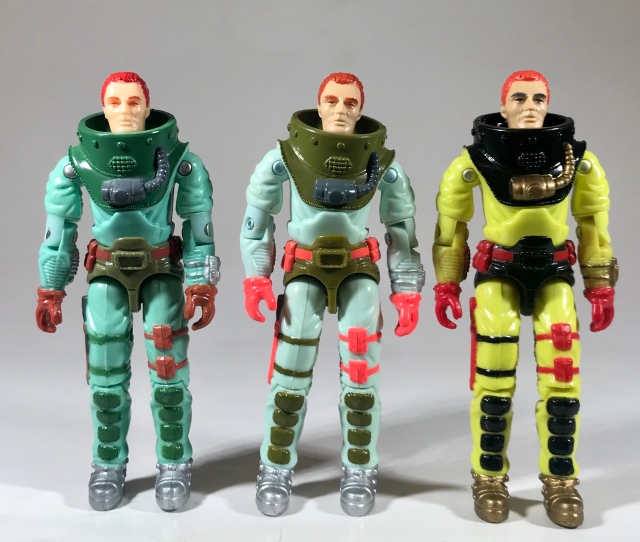 Note the entirely different eye and eyebrow paint on the 93 version.

All three figures with gear: 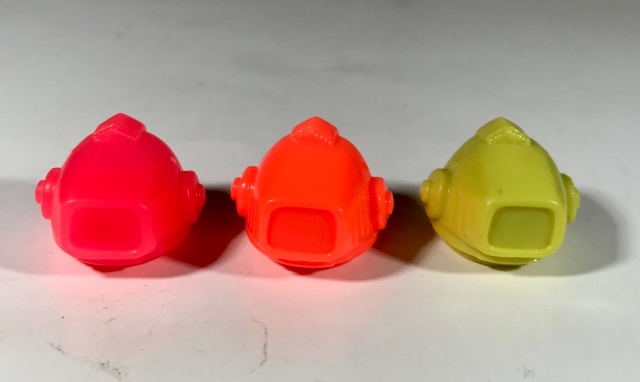 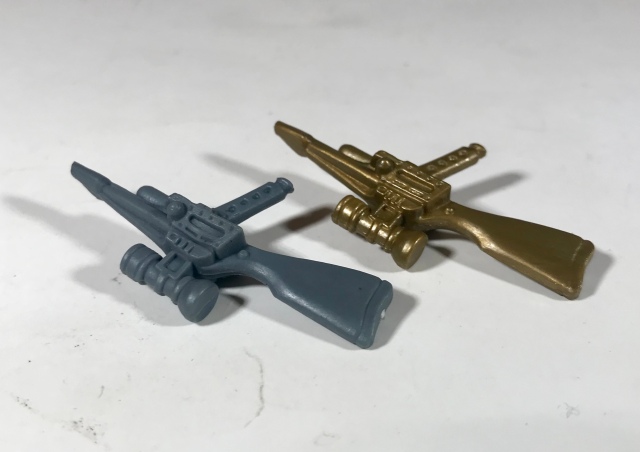 Did I fail to cover everything about the Russian Funskool GI Joe Deep Six? Let me know via social media or by using the contact form on this website.