(Editor’s Note: We’re continuing Ozone October this week with a special guest review from my dear friend Cody. You may know Cody better as CorpsCommanderCody, but he is Cody just the same. I am very excited about this review! So please follow Cody on Instagram and Twitter and then bask in the glory of a very fun International GI Joe release.)

Article and Photos by CorpsCommanderCody

What is UP, wet and wacky Eco Warriors? Wait, this is technically a version of the Star Brigade one? Well, uh… ‘sup, spacefarers and starchildren?

I can’t do this. Anyways, I’m talking about Funskool Ozone today. 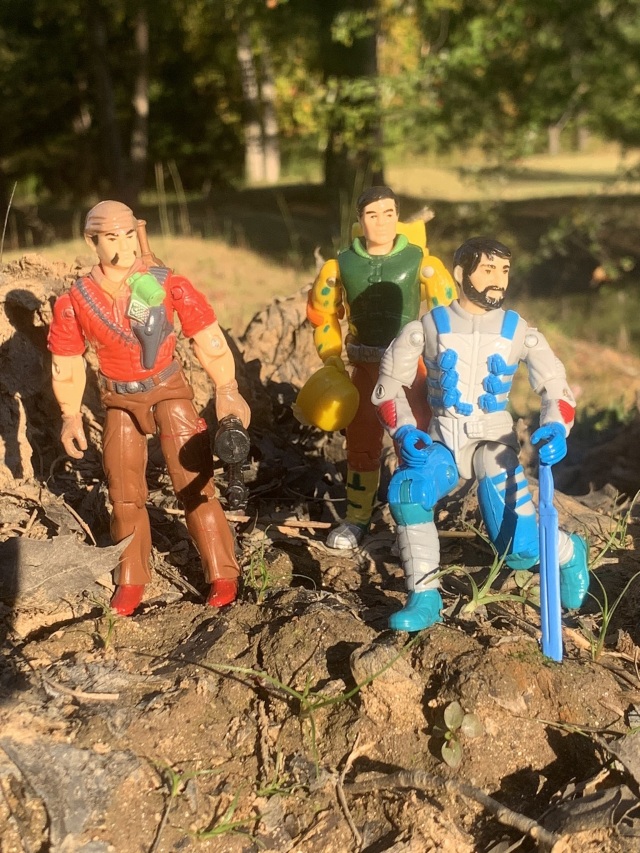 As you probably very well know (if not, there’s many Funskool articles on this site!), Funskool was another distributor of GI Joe for markets in India (and Russia, but this one was from India). The paint quality of the Funskool figures was admittedly not up to the American Hasbro variants, but there were a couple of wacky and cool colors that got used for familiar figures!

This is not quite what I would consider “way out there”, but it is a very fun version.

But I’m getting ahead of myself. Here’s Funskool Ozone:

As you can tell, this is a version of the gray Star Brigade figure. Instead of the silver chest plate, it’s colored white here. The blue on the Funskool version is lighter for sure, ditto the gray (but just a hair). Another fun change- the arms are not Ozone’s, but rather belong to TARGAT, who was also in Funskool hands at this time! They’re fairly similar so it doesn’t really interfere with anything, but it’s another neat little difference.

The face is… fair, but you can tell there’s just something a bit off about him. His eyes aren’t as good, but his beard and other hair looks fine. Maybe it’s just the darker color or the shiny finish for the head, but something is definitely different here.

As Dustin explained, Ozone is a cool scientist soldier who comes well armed with a bunch of weapons. The Funskool version has these weapons in a powder blue (a lot like the blue on him) and his launcher is HOT PINK. I think that’s pretty rad. Kudos to Funskool for more colors in our Joe weapons. 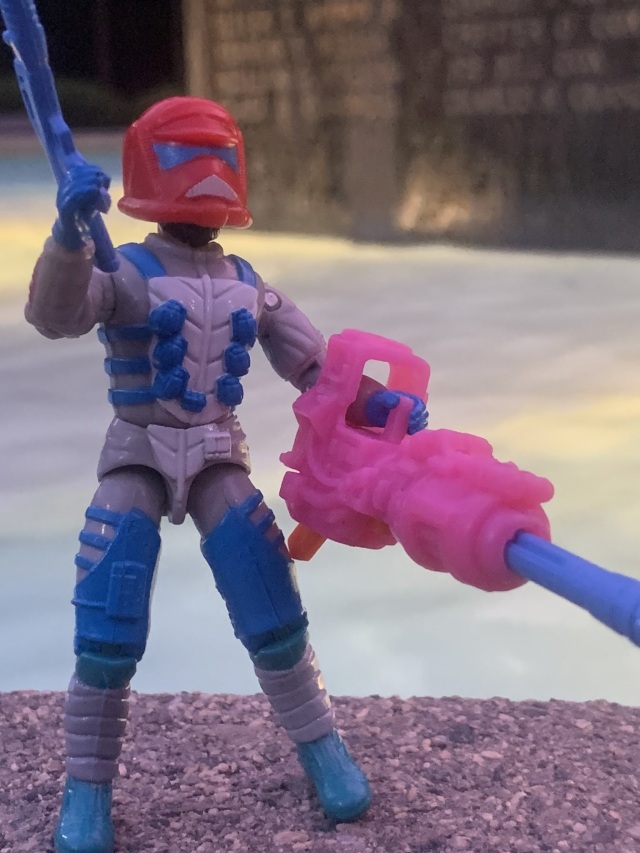 Something that isn’t discussed enough with Funskool figures is that their hands are bendy. This is a feature I happen to like a lot, because it means I can put weapons in the figure’s hands without fear of it breaking, especially the large missile launchers. Unfortunately, this also has a serious drawback- at least on this figure. While I was posing the figure with the shotgun and the machete, I found that his hands were not rigid enough to keep them in place. This is what’s known in the industry as a “big letdown”.

Yeah, these bad boys were swiveling all over the place. The machete in particular wants to slide out. I will go on record as saying I’ve never had as much trouble with Funskool weapons as I’ve had with this guy. It may just be him, who knows? 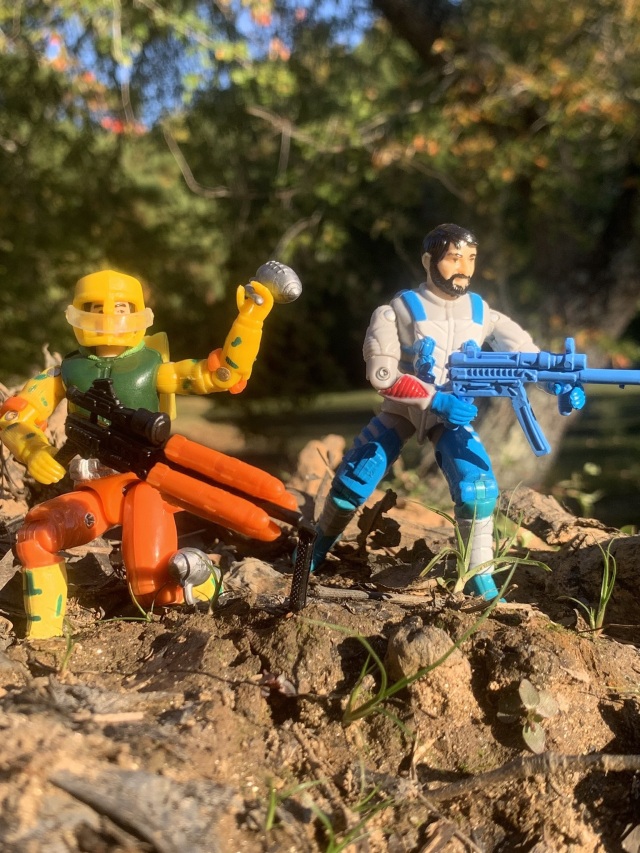 Now on the OTHER hand, it allows him to actually grip the secondary handle on his submachine gun, which is something other figures only dream of! So hey, if you like the submachine gun, there’s an advantage.

Speaking of Soft Vs. Hard, the helmet is made of a hard plastic instead of a soft one. Why the hands ended up being bendy and the helmets end up being rocks is beyond me. But yeah, there’s a little stress mark on the side of the helmet that lights up when I put it on his head. I don’t know how many more times I’ll get to do it, but I’m a little afraid! 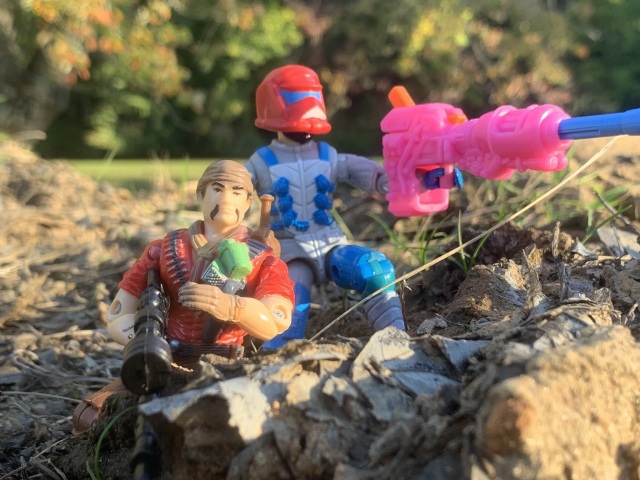 One thing I’ll say as well- this missile launcher is weak. This isn’t the lawsuit-causing daddy-o we got in the states. All of my Funskools with launchers either don’t work or don’t work well. Shame!

Overall, if you are a Ozone head like me, he’s Recommended. If not, you can safely skip this one.

Here’s hoping this was a fun look at a fun variant!

Hi everyone, this is Dustin again. What a fun figure! Cody did a great job of reviewing it and now I want one more than ever. Some day I will own every Ozone.

Shame about the hard plastic helmet, though. Both Funskool Countdown and Funskool Dial-Tone have that problem, too. And I’m sure other Funskool figures do, as well.

Anyway, what do you think of the figure? Do you wish Hasbro gave us powder blue weapon trees and pink launchers here in the USA? Let us know in the comments!

Burham and Saru, 2022, Playmates. I did a little thread about them on Twitter if you’re wondering about their overall quality. #startrek #startrekdiscovery #playmatestoys
Happy Friday, everyone! #GIJoe #funskool #gijoecommunity #surveillanceport #gijoeunion #gijoenation #toygroup_alliance
NEW REVIEW! Join me for a look at the 2002 Cobra Mantis Sub and its driver, Moray v2. Link in my bio.
Abigor (MS In Pocket) #gundam #msinpocket #victorygundam #vgundam
“Sorry, but you have to get into the sub, Commander. Destro’s annual Enchantment Under the Sea Ball and Ice Cream Social waits for no one.” #GIJoe #gijoecommunity #surveillanceport #gijoeunion #gijoenation #toygroup_alliance
V2 Gundam (MS In Pocket) #gundam #victorygundam #msinpocket
Three Generations: MS In Pocket (1993), Mobile Suit in Action (2001), Gundam Infinity (2022). #gundam #msia #msinpocket #gundaminfinity
Maganac Corps #gundam #gundamwing #msia
There he is, my little guy 🎶 #transformers
Be like these fine Americans and do your civic duty. #vote #stalkthevote #GIJoe #gijoecommunity #gundam #msia
Happy Halloween from The Dragon Fortress! #gundam #ggundam #mummy #halloween
Today we’re concluding Ozone October with a look at the hard-to-find Star Brigade version from 1994. My friend @corpscommandercody did an amazing job with this one. Link in my bio! #GIJoe #starbrigade #gijoecommunity
Join 83 other subscribers