(Editor’s Note: Today’s review comes from my friend Tyler Martin aka Baltimore Bivouac. He was one of the first people I followed on social media when I started this project 4 years ago– and he was one of the first people to offer to help me out with a guest review. Tyler is one of the few people I know who’s just enthusiastic about 90s toys, as a concept. On his Instagram account, he showcases everything from Kenner DC figures, to Exosquad, to GI Joe, to Toy Biz Marvel, to Lego Ice Planet. And we both love Super Sonic Fighters Psyche-Out. What I’m saying is he has great taste! Today’s review is also a first for The Dragon Fortress– a GI Joe Extreme figure!)

Review and Photos by Tyler Martin

I am a GIJOE Collector that grew up in the 90s. Many of my favorite Joes were neon, Mega Marines Clutch and the recently reviewed Battle Corps Long Arm were regulars (if not the leaders) of my missions. Back then my Joes operated mainly as some sort of undercover organization rather than members of a rank-and-file military team and I was crushed as a 9-year-old when Battle Corps and 3.75 Joes disappeared in ’95.

In their place, kids like me were presented with ‘GI JOE Extreme’ to fill the void.

This blog entry is about Ballistic v2, one of the few figures from that line that is worth having, but we’ll get to him in a minute.

In the “dark years” of 1995 and 1996, I remember scouring the toy shelves for joe-like things that I could use to help me in my adventures. The Street Fighter movie vehicles were great, and gave me an opportunity to add some classic vehicles to my arsenal I would have otherwise gone without.

I remember finding the Heli-fighter at a Toy Works in Rehoboth, DE in ’95. This chopper was a re-mold of the 1983 Dragonfly, but to me it was replacing my long since destroyed 1988 Tiger fly.

The Sgt. Savage line came around in 1995 and gave me a few troops to fill in my ranks with and while it was awkward to have 5’’ figures fighting alongside my 3.75” ones I made do. I just pretended they were big guys and my Joes were very understanding. We don’t body shame people or action figures in my house. They were welcomed as being just another one of the guys.

This finally brings us to GIJOE Extreme. There were many changes made to the GIJOE brand with this line and I think ultimately it was the number of changes and not just the figures that made me dismiss it as a kid. It wasn’t just the IN YOUR FACE attitude (although I remember not liking it) it was the discontinuation of the GIJOE universe, the new scale, the reduced/altered articulation, and the overall look of the line was just ugly to me.

The figures were now not only bigger, they were mean, gnarly, and the accessories were scarce, but I should point out that I do remember wanting 2 figures from the line.

Fast forward to a day last year when I ordered Ballistic v2, Heavy Metal V2, and the 411 Cycle. I felt instant buyer’s remorse, and when they arrived, I put them in storage almost immediately. Fast forward even further to a day just a few weeks ago when I opened them and found to my surprise, “Hey! These are pretty cool figures!” They even made me think I might want to buy more figures, and even though I have cooled on that idea quite a bit my opinion on Ballistic v2 has not changed. He rocks, and I would like to thank @TheDragonFortress (Dustin) for allowing me to fill-in on his blog to tell you why.

Overall, I LOVE the look of this figure. I’m sure a Hasbro executive in 1995 would be thrilled to hear someone say that, whether it be in 2021 or 1995. But seriously, I dig it. He’s made of a sturdy gold plastic and then the Navy blue and Kelly green are painted on.

His face is well-sculpted and has a serious expression. It is important to note that this figure has a nice face sculpt because many of the Extreme figures appear to have rabies. Seriously, most of them have a sneer, are foaming at the mouth, or look like trying to finish a personal best on a deadlift or something. Ballistic doesn’t have that problem and his trademark Extreeeeeme rebelliousness is illustrated by his long hair which is being held in a ponytail.

I guess by military standards this is extreme but to me it just seems like a ponytail, and doesn’t bother me at all. In fact, without the long hair he would probably look like a Backstreet Boy with his hair being nicely combed and waved in the front. I assume his sideburns are also not regulation, but I am no expert on military follicle protocol. 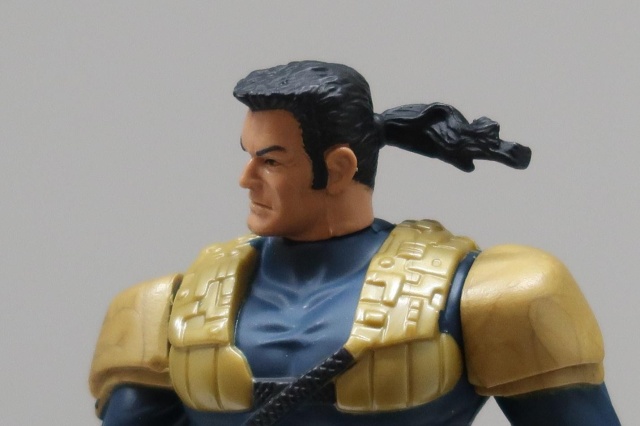 Moving on to the rest of the figure, I love the blue and green combo here and the gold armor does two things for me. 1) It reminds me a lot of Barricade from the A Real American Hero era of GIJoe and 2) The gold armor makes him feel like he could participate in some intergalactic battle with Batman and the DC Total Justice Lineup from 1996. 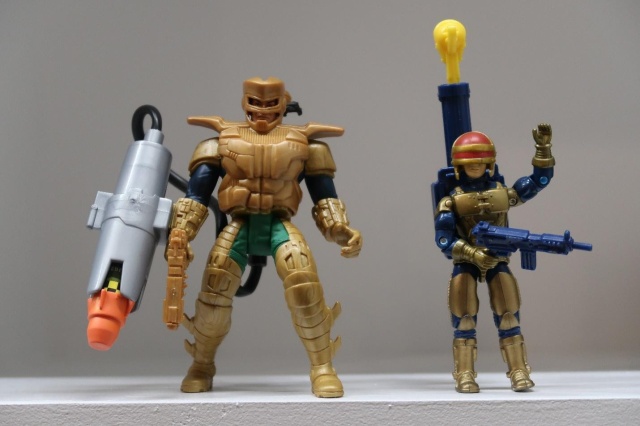 Ballistic and Barricade from the ARAH era of GIJoe. 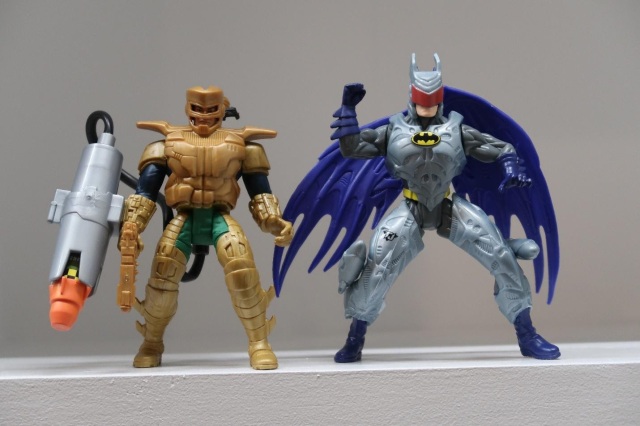 Ballistic is a “Deluxe” figure in the GIJOE Extreme line and was included with a missile launcher that required you to, “SMASH” it to fire a nerf-style missile. This is not the best gimmick I’ve ever seen, I personally prefer lights and sounds, but it doesn’t hinder the figure’s articulation in any way, so I’ll give it a pass. It works, but you really have to smash it to get it to work and I am I too old to be smashing my toys at this age. As a result, the missile stays in the launcher looking menacing as the design intended.

The “Smash” feature on the backpack

He also comes with gold battle armor that clips on his hips and over his shoulders. It’s cool but there is a real risk of chipping the paint on his hair anytime you take it on and off. That’s not ideal, but the figure looks good with the armor on or off so it’s tough to choose how you want the figure displayed.

He also comes with a laser blaster which further adds to his appearance of space battle preparedness. The accessory is gold like his armor, is well-detailed and fits well in his hand.

Ballistic has 5 points of articulation. His head moves a full 360 degrees and his arms do as well when he is not wearing his armor. His legs can bend to 90 degrees forward allowing him to achieve a standard sitting position.

This is not the most articulated figure I have ever seen but he can do all the things you need him to do. Additionally, I would point out that the lack of articulation requires you to stretch your imagination ultimately making the number of poses he can achieve unnumbered. I took the liberty to create some for this entry, I hope you enjoy them.

“Missed it by THAT much “ 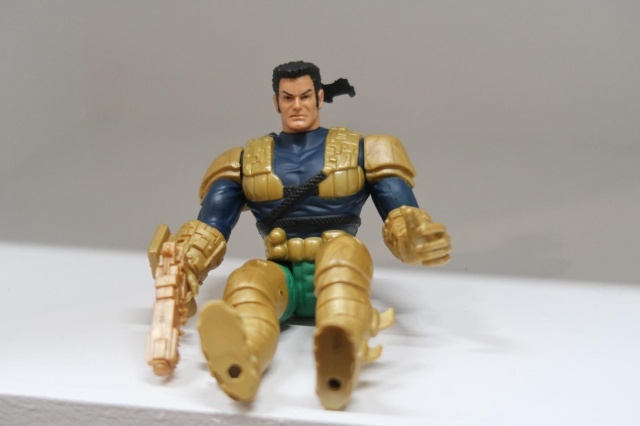 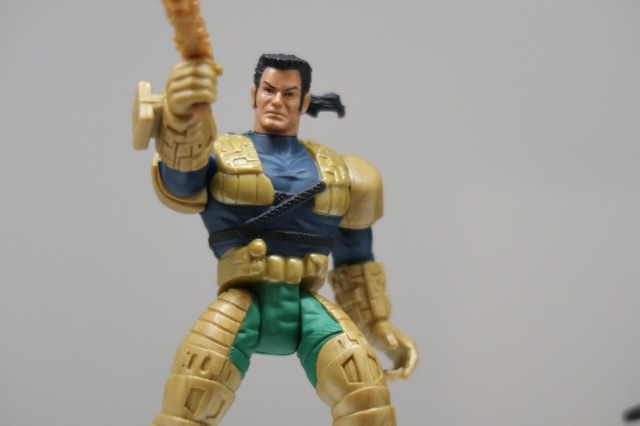 I think it goes without saying at this point that I really like this figure. In a line full of beefed-up goofy looking soldiers, Ballistic manages to stand-out by looking like something else entirely. He’s a pony-tailed, gold clad, Spaceman.

Is he from the future? Does he fight baddies in space? While the answer within the GIJOE Extreme canon is a hard, “no” it’s very clear that this figure stands out from his peers and strikes a different vibe.

If I would have had this figure as a kid, I think for sure he would have done battle with my DC Super Heroes or maybe have helped out Dash Rendar on a distant planet. Whatever I would have thought of, you can bet it would have been “Ballistic!!” I mean, EXTREEEEEME!!!!!!!!!

I’ve never owned a GI Joe Extreme figure, and my thoughts when the line came out mirrored Tyler’s own thoughts on the matter. I have to say, though, that after reading this review, I wouldn’t mind grabbing a couple of them. They’d be perfect for hanging out with Kenner DC and Toy Biz Marvel figures.

Huge thanks to Tyler for writing such a funny and insightful review of a long-forgotten toy from a neglected line!

What are your thoughts on GI Joe Extreme? What was the worst example of 90s GI Joe “Keeping Up with the Cardassians?” Personally, I think GI Joe is kind of a natural fit for the “superhero figure” style the more I ponder it. Do you agree? Let us know in the comments!