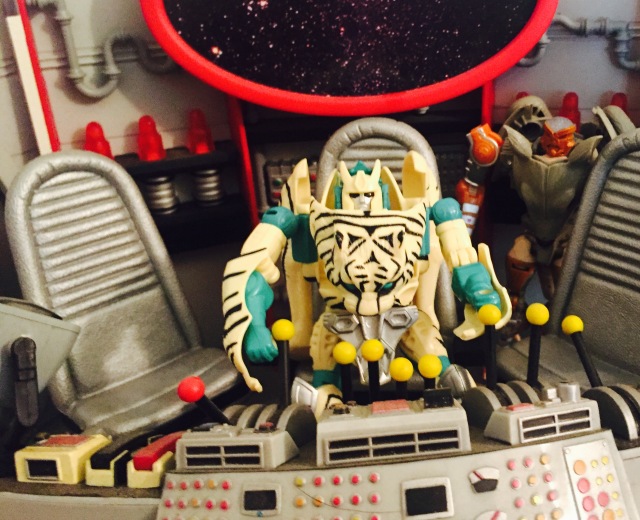 Me and 1996 Transformers Beast Wars Tigatron Down by the Schoolyard

I wrote about this previously, but in the summer before I entered 9th grade, I had a house fire and lost almost everything, including my toys. This included quite a few G1 and G2 Transformers. Transformers, GI Joe, Lego, and Marvel (Toy Biz or Hasbro) have always been my favorite toy lines. I had plenty of Transformers from the late 80s to the early 90s, and they were all gone in a flash.

Previous to the fire, I’d only owned two Beast Wars toys– Rhinox and Terrorsaur. I really loved them, and I loved the Beast Wars CGI animated show. I watched it whenever I could catch it on TV.

After the fire, I had some amount of insurance money I could spend on toys to replace what I had lost. I concentrated on the 97 GI Joe series, Lego Fright Knights, Exploriens, and the Western theme, and Beast Wars. 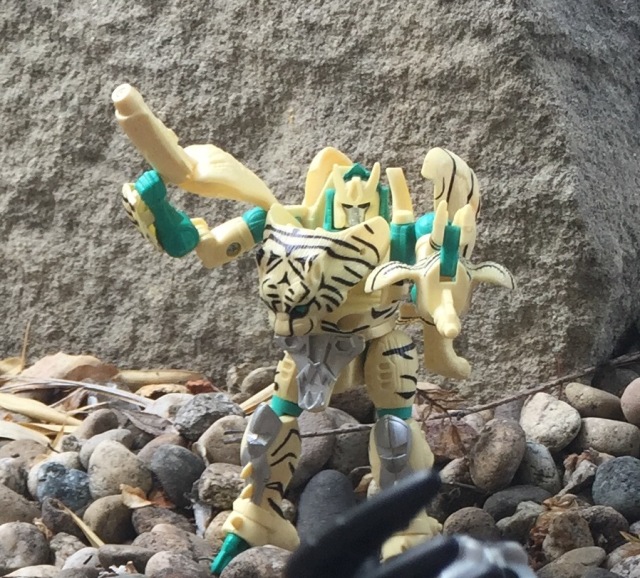 I was able to pick up several Fuzors and Transmetals, along with a few earlier figures. I loved them all, and they got a lot of action from me. But I still felt a little… limited. At the time, I really missed Transformers that turned into cars and spaceships. But there were absolutely none available to me. I was also disappointed that I’d missed out on earlier Beast Wars toys, and couldn’t have my favorite characters from the show– like Tigatron. Rhinox is my absolute favorite, but Tigatron is a close second on the Maximal side.

Soon enough, Beast Machines and the original Robots in Disguise came along, and I got plenty of vehicle Transformers. And I have boxes full of them now from all sorts of lines. As a fickle collector, this made me miss and appreciate Beast Wars. Whenever I’d get nostalgic, I’d look up Beast Wars toys on eBay… and forget ever buying any of them because they’re so dang expensive.

But then, a miracle happened. Or, rather, an extreme act of kindness. My good friend Pat found a huge lot of Beast Wars toys at a garage sale. He bought them all and shipped them to me, all the way from Boston to Boise. I couldn’t believe my good fortune.

Here’s what he sent me:

The lot included Tigatron! I’d always wanted him, and here was a nice version with good joints and his accessories. There were so many treasures in that box, but Tigatron was my favorite of all of them.

Though Rhinox is my favorite character, and I have plenty of Rhinox toys (Generations, original BW, Fox Kids BW, Transmetals, and Fox Kids Transmetals… phew!), I’m choosing to focus on Tigatron. Both because of what my friend Pat’s generosity means to me, and because it’s a gall dang gem of a toy.

First things first– Tigatron is a straight up repaint of Cheetor. Cheetahs and Tigers are way different animals (though they are both cute adorable kitties), but Kenner/Hasbro was always about making new characters from repaints of other molds.

It’s a pretty good looking cat mode, even if it’s not exactly a tiger! Siberian tigers are amazing animals, and it’s great to have one as a toy– especially one that transforms into a zen killing machine.

There’s not much articulation here. You can see robot parts sticking out. It’s lumpy and the proportions are weird. But it’s still an amazing beast mode. The colors are striking, and it’s a magnificent looking animal. Its flaws and obvious machine bits just make it more endearing. This is a transforming robot toy made for children, not a highly-articulated museum piece. No Masterpiece Transformer could ever match this kitty’s charm.

Transformation is pretty simple, but you have to move parts in the right order. If you don’t, parts will mash into other parts and frustrate you.,Worse yet, you could even damage the toy. But, still, I figured this thing out without instructions the first time, and I’m 100% sure both you and the average 8 year old could do the same. I’m terrible at figuring out modern Transformers, but this guy was a breeze.

Here he is in Robot Mode:

Teal and white look great together, don’t they? This is a handsome robot mode, even if his face isn’t an exact match for what we saw on the Beast Wars cartoon. He’s got good articulation, even if the hips are a little restricted. He’s attractive, sturdy, poseable, and fun. He’d kill it on Tinder.

Nothing gets in the way of anything else, and none of his pieces fall off when you move him. He’s not even a bit finicky and he looks great. That’s exactly what I look for in a Transformers toy.

That, and a crotch that looks like a tormented screaming nightmare face. He basically delivers on every level.

Here are his weapons: 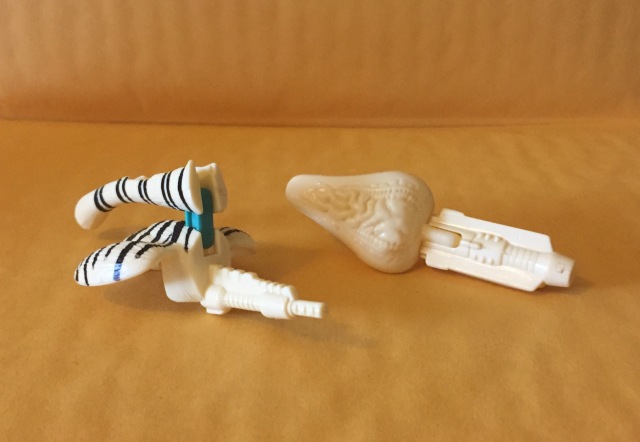 One thing that annoyed me about many Beast Wars toys were the weapons, or sometimes lack of weapons. Many figures lacked handheld weapons entirely, and many figures simply used very odd swords, blades, or clubs. I loved G1 and G2 Transformers for all of the cool guns the figures came with, and loved that they could (for the most part) use each other’s weapons.

Though these weapons have cat asses and intestines hanging off of them, at least they’re cool guns. Any Beast Wars toy with two guns, even if one of them shoots water, is an upper echelon toy in my book.

Here he is All Geared Up:

He holds his weapons perfectly, and he can point them convincingly at any Scorponok or Manterror that crosses his path. Though the Tigatron we saw on TV was more of a philosopher and an environmentalist than a John Woo protagonist, he does look like a stone cold badass dual-wielding his fur and entrail guns.

Beast Wars toys got more complicated and ambitious after the first few series. Many modern interpretations, from Generations to Masterpiece, are more show accurate and have better transformations and articulation.

I don’t give a hot crap about any of that.

For me, this is Tigatron. It’s the perfect Tigatron toy, and it’s better than any of us deserve.

I don’t really have much else to say about this toy but I do want to break up the GI Joe reviews every once in awhile with something a bit different. Since my favorite 90s toy lines are GI Joe (obviously), Beast Wars, Exo Squad, TMNT, Star Trek, and Toy Biz’s Marvel offerings, there’s a good chance you’ll see some of those toys reflected here from time to time.

What’s your favorite overpriced Tigatron toy? Let me know in the comments!