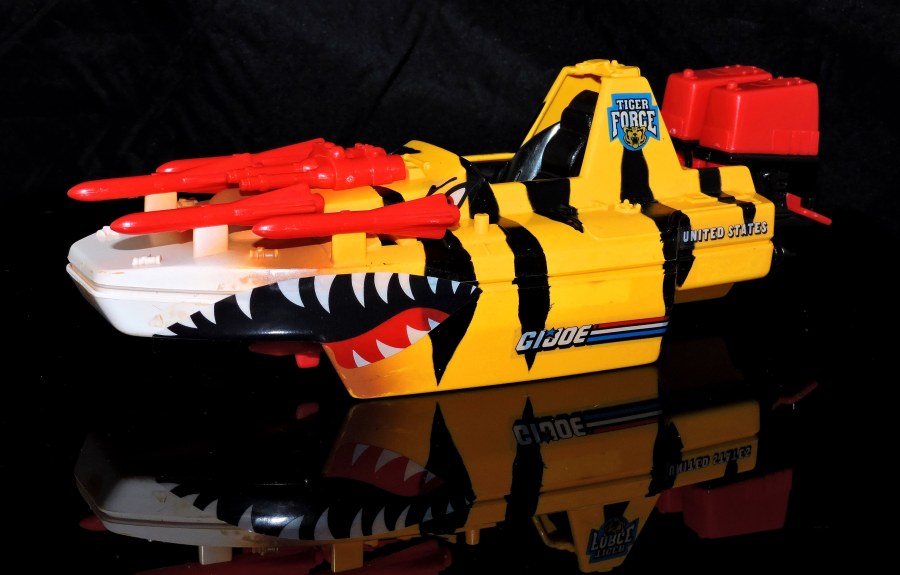 (Editor’s Note: I have another special treat for you today, courtesy of SurveillancePort.com proprietor CIAD aka Erick. He took these photos and was kind enough to loan them to me. I hope you enjoy some nice, clean photos of a dazzling little speedboat.)

Tiger Force Friday is always a big thing in the GI Joe Social media world. Just check out the hashtag on Instagram. I don’t usually participate, both because I am a loner and a rebel, but also because I’m never prepared and always forget about it.

Today, I’m a joiner and a conformist. But in a good way!

Thanks to Erick from Surveillance Port, here’s a fantastic photo gallery of the 1989 GI Joe Tiger Fish complete with every angle you could ever want.

The Tiger Fish was released by Hasbro in 1989 (or possibly 1988). It’s a repaint of the 1986 Devilfish, done up in the Tiger Force standard colors of yellow, black, and white. It also has some very nice red hardware. I remember staring at the Tiger Force vehicles for hours as a kid, courtesy of a 1990 GI Joe catalog. I’ve never personally owned a Tiger Force vehicle, but the white-to-yellow fade on the front of each one always left me spellbound. It’s just such a nice look.

The Devilfish itself is one of my favorite Joe vehicles. It’s from well before my time, but since it was affordable for a long time, I got one several years ago. Longtime readers will know I’m fond of GI Joe divers, naval operatives, and watercraft– and the Devilfish is one of the best items Hasbro ever made in that category.

The Devilfish is another rare example of a GI Joe item I actually display. It’s always piloted by 1985 Shipwreck, along with Polly perched on one of the machine guns, and two 86 Wet-Suit repaints on the footpegs.

Honestly, I think the 1989 GI Joe Tiger Fish looks even better than the Devilfish. Orange and grey look good together, but there’s just no way to compete with that vibrant yellow, those black tiger stripes, the red weaponry and engine, and the white bow of the craft. You’ll see it pictured here with a nice factory custom Tiger Force Starduster, and he looks great with it. But can you imagine it with a Brazilian Exclusive Marujo (Tiger Force Shipwreck)? I don’t even know if it’s legal for something that beautiful to exist on this hell planet.

Anyway, here are the photos!

My friend Colin also posted a lovely review of the original Devilfish just recently, which you can check out here.

Thanks again to Erick, who has been a huge help during a difficult time.

What’s your favorite Tiger Force vehicle? Let me know in the comments!