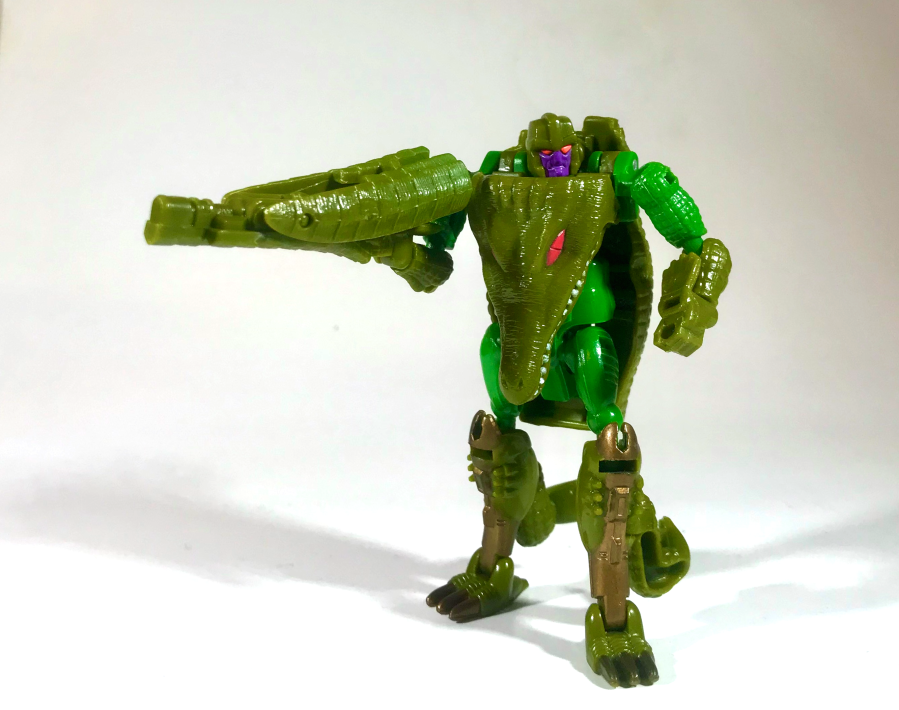 The following was written by my dear friend Pat (@ptotime).

The first time I met Beast Wars Megatron (Crocodile) I was just about at the end of my rope. I’d just been given my fifth “Frown Flag®” at the family-style restaurant where, until that afternoon, I had been employed. We were required to wear lederhosen and yodel at the customers while bringing them their food. Children are terrified of yodeling, or at least of my yodeling, and so this ended badly more often than not. I was making $1.75 an hour before tips and no one tips a man in leather short-pants who yodels over a platter of onion rings and rubbery chicken parm. 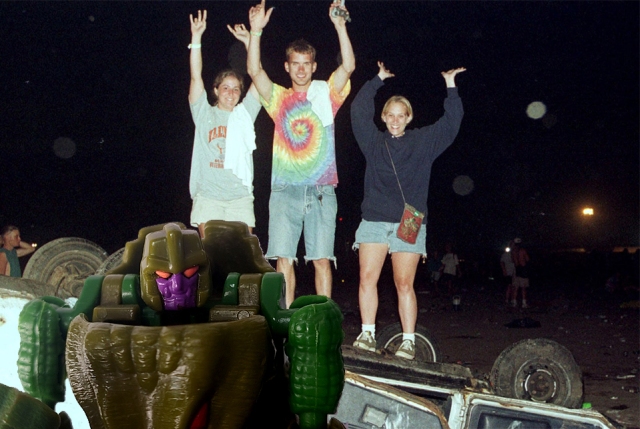 I was drinking and leering and wondering if I was finally brave enough to hand a note about a gun to a bank teller when Beast Wars Megatron (Crocodile) sat down on the bench next to me. “You play cards, son?” he asked. His words came out all funny because of the giant tusken fangs that gave him a pronounced underbite. It sounded more like “Hhyuh pweh curr, sah?” I didn’t want to say anything about it because I worried that making fun of someone else’s way of speaking would be overheard by one of the joggers and they’d think I was a racist. There was also the matter of not wanting to make fun of a killer crocodile robot.

“Yeah, I play cards sometimes,” I said to Beast Wars Megatron (Crocodile). “What’s your game?” I figured he would say poker, or blackjack, or most likely, three-card monte.

“Bridge,” Beast Wars Megatron (Crocodile) replied. “If you play bridge, you play the harp that is the universe.” I was so intrigued that I forgot to leer at the jogger who passed.

“Bridge uses a fifty-two card deck. Played by four people,” Beast Wars Megatron (Crocodile) continued. “Two partnerships, which are like teams. Four phases. Thirteen tricks per deal. Add all of this up, and what do you get?”

I didn’t feel like doing mental math and was probably a little too blue-flavored for basic addition, so I just nodded dumbly instead of answering.

“Seventy-five,” Beast Wars Megatron (Crocodile) answered. “Exactly the same number as the number of major Yakuza families in Japan. This is not a coincidence. You see, in bridge they call it a ‘trick’ because it represents the ultimate trick, which is crime. To live honestly and with respect from the law is to cheat no one, but every time you lie, every time you trick someone, that’s a crime, going back to the dawn of civilization, the first trick ever played, which was the first two neanderthals hiding food from one another in secret caches, primitive drop boxes, saving the food for later. Seventy-five of these caches and around each one a society formed, which continued through the Medicis, the Rothschilds, into the modern-day Yakuza.”

I nodded, slowly. Beast Wars Megatron (Crocodile) continued to tell me his tale. “The Yakuza use card games to arrange secretive deals. If you ask a man with one pinky to play poker, he’ll ask what kind. If you say ‘five card draw’ it means you want to engage in human trafficking, on the buying end. If you say ‘seven card stud’ it means you’re selling. If you say ‘Texas hold ’em’ it means you’re involved in the international distribution of powerful narcotics, sponsored by nation-states seeking to keep the public docile. ‘Follow the Queen’ is the most insidious thing you can say to a Yakuza on the topic of poker. If you say that you deserve what you get, and your descent into madness is inevitable. What you see will not be un-seen.” 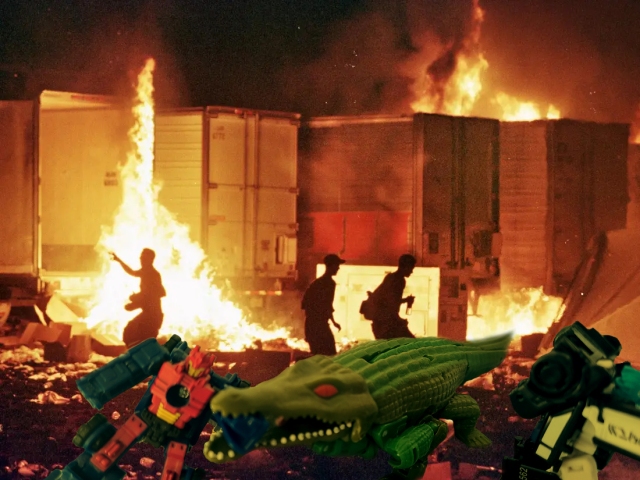 I wanted to ask about five card stud and if it signified a different type of crime than seven card stud. Beast Wars Megatron (Crocodile) didn’t give me a chance to get a word in, edgewise. “Of course you still have to play the game with the Yakuza, and if you lose, there are penalties. Penalties are what we commonly think of as punishments, but what they actually are, are ways of controlling and inhibiting your free thought. Penalty box. You understand? To escape the penalty you must know what penalty you are facing, just like how to create fire you must understand the four elements, you must distinguish how fire is separate from air, water, and earth, which is the lowest element, being that earth, dirt, bedrock, it emits a constant low-frequency hum, if you put your ear to the ground it emanates and vibrates, and this hum has been causing a global upswing in sterility, statistically proven by biographical ear data. Sterility is in and of itself a penalty that must be understood to be overcome, like impotence.”

Beast Wars Megatron (Crocodile) asked me if I was aroused at that moment and I replied truthfully and said no. “See? The earth below us hums and has left you impotent. I have ways around this, though. Secret techniques. Won from the Yakuza in cards, in bridge, with my partner, a bat, you may know him, you may not, but his shit is actually a key ingredient in creating gunpowder, which is crucial to all of this.” 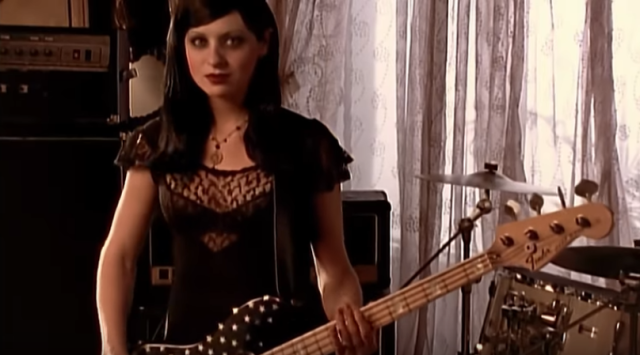 I quickly got the picture where this was going and wanted no part of an alleged cure for my impotence, which was a real problem I was facing (and part of why I was fired from the restaurant) but one that wasn’t going to get fixed by a robot who turned into a crocodile. I made some excuse about having to attend a fancy party at a haunted Victorian manor and got up to leave. As I went to cross the street, I was hit by a city bus and killed instantly.