Today I’m joined by my friend Nekoman, purveyor of the Viper Pit. If you’re not following his work, you should be. He takes some of the best GI Joe photos (and toy photos in general) around, and his reviews are perfect blasts of fun, nostalgia, and insight. He’s one of my favorite people in the online action figure community. You can also find him on Instagram and Twitter.

He suggested today’s collaborative review, which I’m very excited about. Today we’re taking a look at the 1992 GI Joe Headquarters, which has an exalted place in both of our hearts.

Nekoman also took every single photo featured in today’s review, which should earn him a hero’s wage. But this is the internet, so that really just means this review will be stolen by some aggregator site like ToyFarts.ru so they can make money off of Cialis ads.

But really, every single one of you owes Nekoman a Shasta Cola. And I owe him upwards of three Shasta Colas, which I will never financially recover from.

END_OF_DOCUMENT_TOKEN_TO_BE_REPLACED

(Editor’s Note: Today’s review comes from Robert aka RangeViper84, who was one of the earliest friends I made when I started this project. Robert’s childhood experience is quite similar to my own, as we were born in the same year. I always enjoy his take on GI Joe, and I’m delighted to present you with his take on the GI Joe line’s most unloved toys. You can find Robert on Twitter and Instagram.)

Review and Photos by Robert

I grew up watching the show, playing the NES video game, and collecting Joes from Kay-Bee Toys and Toys ‘R Us, but largely shifted out of any “collecting.” Between 2000 and 2017, I maybe purchased 10 GI Joe-related items (Cartoon DVDs, Storm Shadow Sideshow figure, to name a few).

Then, with the birth of my son in fall 2017 I started to retrieve all of my old Joes, Turtles, Marvel, and Spawn figures from my moms house. Many O-rings had deteriorated and it was that process of repair that re-ignited my love for the franchise and desire to “get back into” GI Joe.

END_OF_DOCUMENT_TOKEN_TO_BE_REPLACED 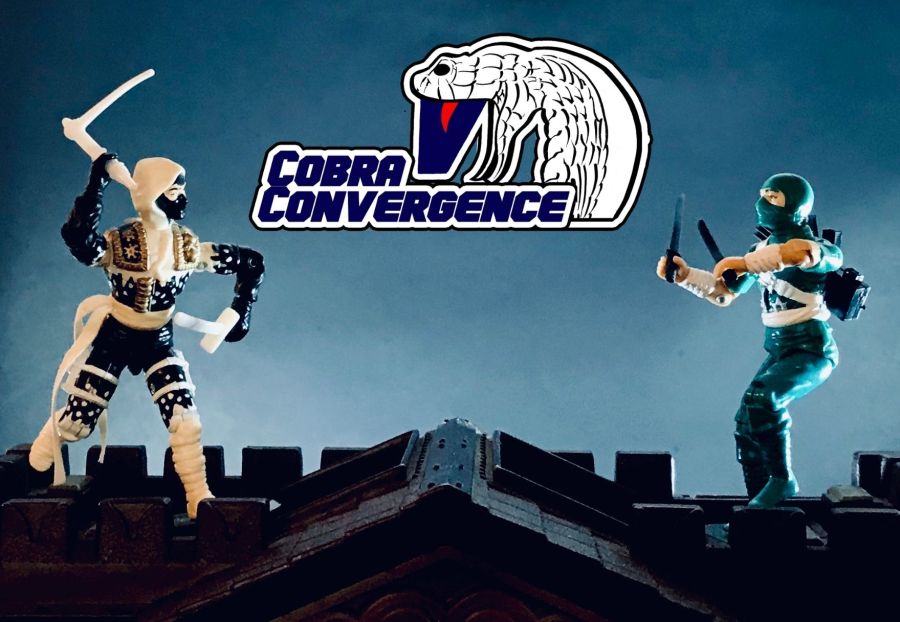 Today I’m joined by my friend RTG of Attica Gazette for a look at the 1992 GI Joe Ninja Viper, who was available exclusively as a mail-in offer. RTG is doing me a huge favor by providing photos and analysis– I never experienced the original Storm Shadow mold as a kid, and he’s written extensively about the figure and has something insightful to say each time he does. I couldn’t think of anyone better to help me out with this one.

Motto: “He who masters the art of self discipline can crush any adversary, even G.I.Joe!”

Recruited from the highest ranks of Cobra’s Viper Corps, the COBRA NINJA VIPERS are the elite representation of Cobra’s new elevated level of ruthlessness. Only the most sinister and cunning Cobras are selected for duty as Ninja Vipers. Cobra Ninja Vipers are no less than 10th level black belts in karate, jujitsu and kung fu. These villains are extremely obedient and always carry out their orders to the letter. They function as covert subversives who can “persuade” any foe to do their bidding by entrapping the individual in one of their patented martial arts maneuvers. If given the opportunity, Cobra Ninja Vipers could wreak enough havoc worldwide to seriously damage G.I. Joe’s global operations.

END_OF_DOCUMENT_TOKEN_TO_BE_REPLACED 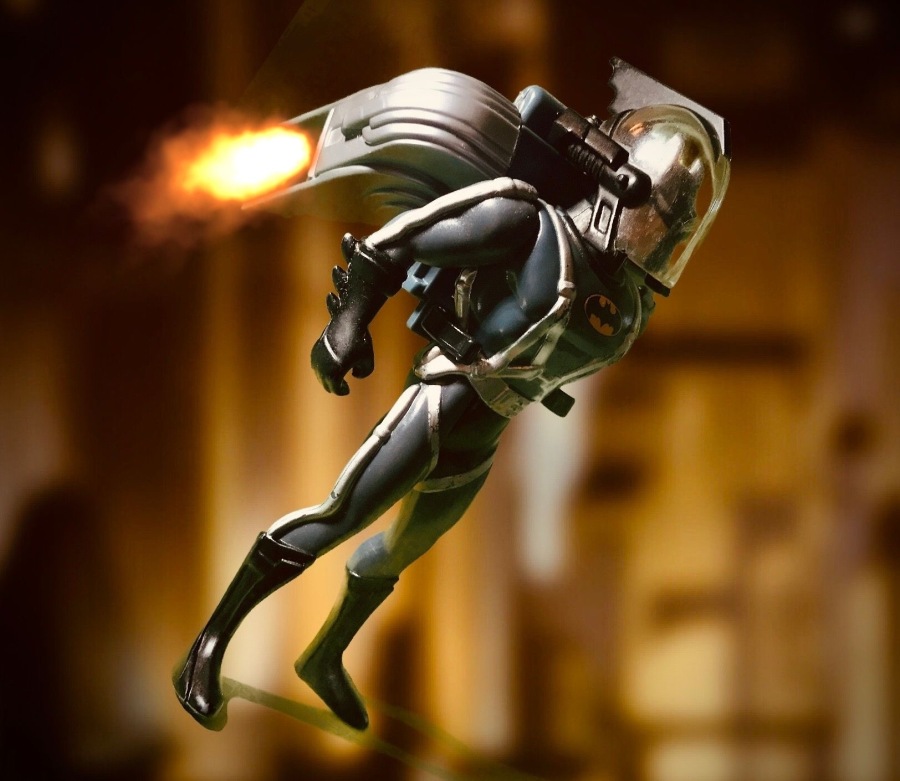 This review is a bit different. Not only are we looking at an action figure from a toy line we’ve never talked about here before, but my friend Pat is also joining us. Pat is one of my oldest, dearest friends and we’ve undertaken many regrettable projects together. Here is our latest.

If you like both Pat and myself, know that we both contributed to the TMUK/Toy-Fu Transformers Action Masters Zine I wrote about in my last post. Pat’s contribution to the zine is a comic, and if anything else included in that zine makes me laugh that hard, I promise I will literally eat my hat and then never fulfill that promise.

Let’s talk about some old Kenner Batman toys! Today we’re going on at length about Kenner’s 1992 Turbojet Batman from the Batman: The Animated Series line.

END_OF_DOCUMENT_TOKEN_TO_BE_REPLACED 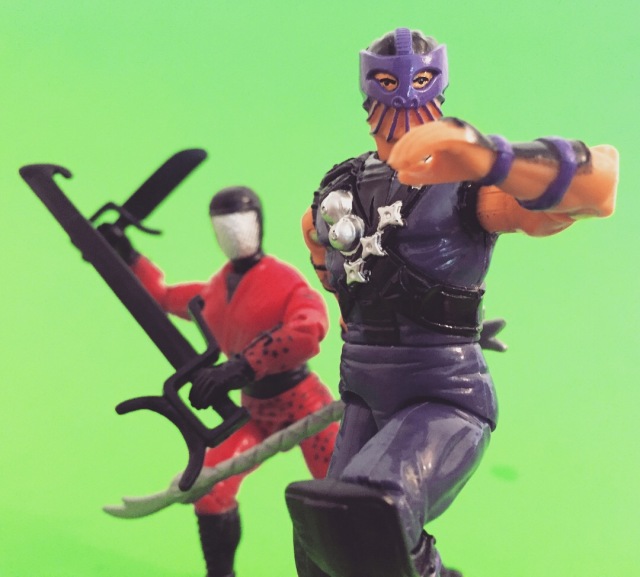 Motto: “I’m a back-breaker, a face kisser, and heartbreaker! Don’t mess with me, or I’ll go Pat Benatar on your ass!”

Rumor has it that DICE was once a Cobra NIGHT CREEPER, but was kicked out for being TOO evil! He refused to donate to the Broca Beach Fire Department for their annual Cobra Hook and Ladder Viper calendar, and that was more than NIGHT CREEPER LEADER was willing to tolerate!

Dice operates as a partner to the Cobra Ninja Swordsman SLICE, specializing in choke holds, pressure points, snares, traps, blunt instruments, woodwind instruments, and eye-gouging. His weapon of choice is the Bo-Staff, which he can manipulate with blinding speed and bone crushing power. It’s a hockey stick, wrapped in duct tape, with a steak knife taped to one end, but that doesn’t seem to blunt its effectiveness in combat.

His most dreaded technique is a motion he calls the “Flying Dragon.” Everyone else calls it “a sort of awkward backhand slap.” Dice is most troublesome when he gets behind the wheel of the Cobra Rat, simply because he never wears his glasses while he’s driving.

END_OF_DOCUMENT_TOKEN_TO_BE_REPLACED

Cobra’s elite street level guards, the HEADHUNTERS, are ruthless, highly trained, and picked from the best Cobra has to offer. In order to meet the daunting Headhunter qualifications, a Cobra soldier must have a high school diploma, a GED, or any Warsaw Pact equivalent. Vetting for Headhunters is so extreme that candidates must pass a gruelling algebra test, know where the safety is on a 9mm pistol, be able to name four Bob Marley songs, and have a valid driver’s license. Former food service workers with more than four customer complaints are also heavily considered. Once a Cobra soldier becomes a Headhunter, they can look forward to standing around behind HEADMAN in a variety of dark alley and nightclub situations. The only thing Cobra Headhunters love more than sticking it to GI Joe is selling weed to undercover cops.

From the files of Cobra Commander: “Headhunters? Oh, yeah. Those guys are okay. You can hit them up on their beeper at 3am, and they’ll be at your house in under 30 minutes with whatever you need. And I do mean whatever you need. Well, kind of. I usually just end up with a bag of dirt weed (mostly seeds and stems), some prescription cat valium, and a frozen Tony’s Pizza. But, let’s be honest, that makes them more elite and dependable than 90% of my forces. That Headman guy, though? Fedora, ponytail, goatee, or bandit mask– you only get to pick one! Cripes, what a doofus.”