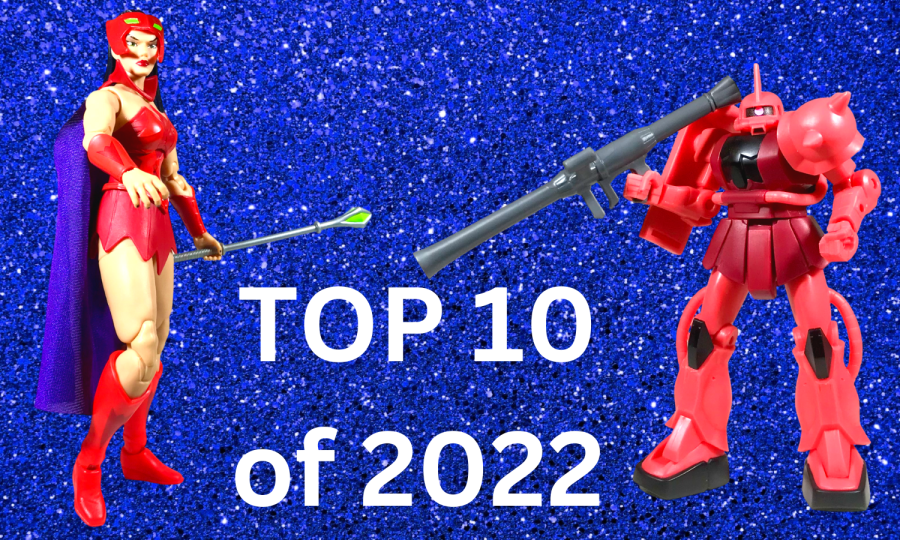 Hello there. Here are my top 10 toys of the year. They’re all items that actually came out in 2022. If this was a list of new-to-me things from years past that I bought this year, this would be a much more challenging list.

So here’s to taking it easy. Let’s get started. 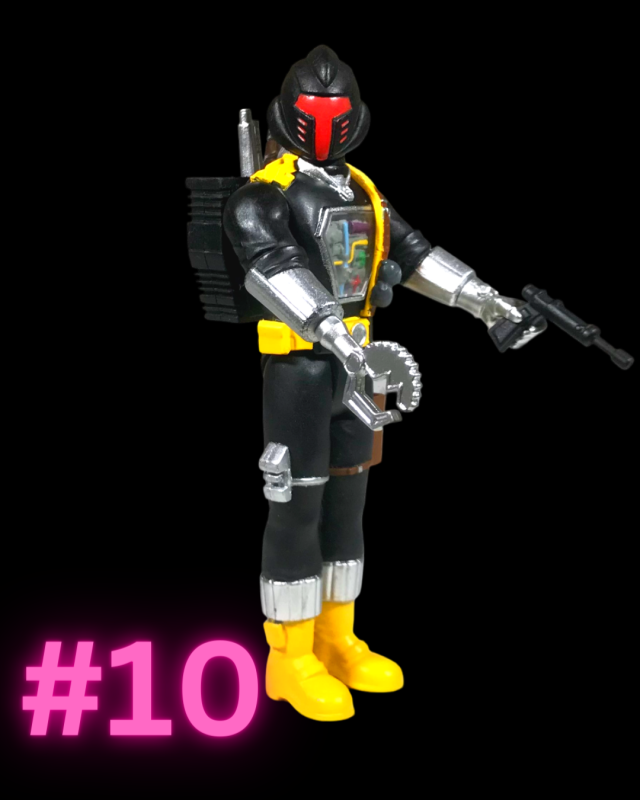 I was really surprised by how much I liked this figure. Sure, it’s too expensive for what it is, and having a GI Joe toy with bad articulation is always a bit of a bummer, but this toy just looks excellent. 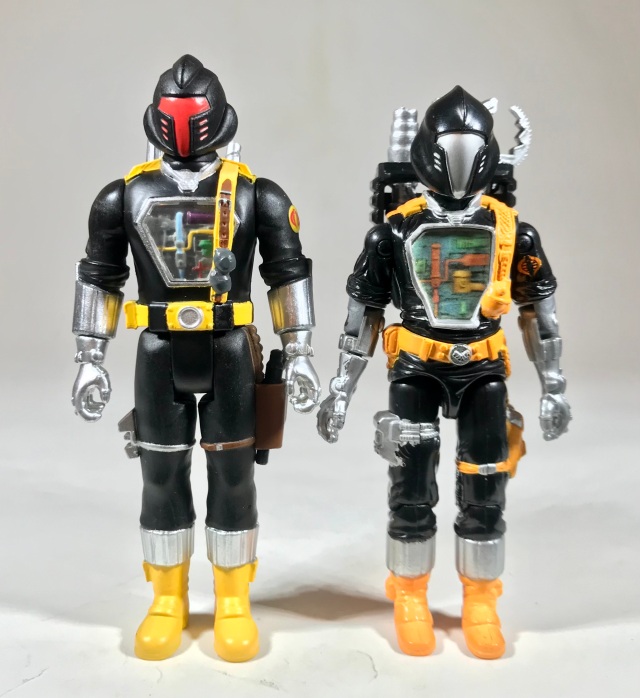 It also comes with a backpack, two guns, and the whole suite of arm attachments. It’s one of the rare ReAction figures that delivers a huge amount of play value, so it can do more than just stand on a dusty shelf. The sculpt and deco are great, too, which also helps. I decided against getting a second BAT to join this one, as this figure is more than enough for me. 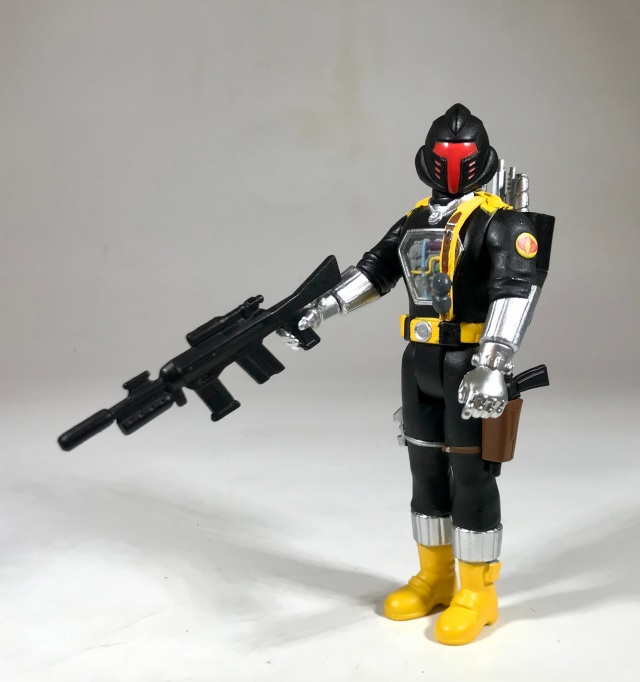 But it made me smile and I kept coming back to it, so it makes the list. 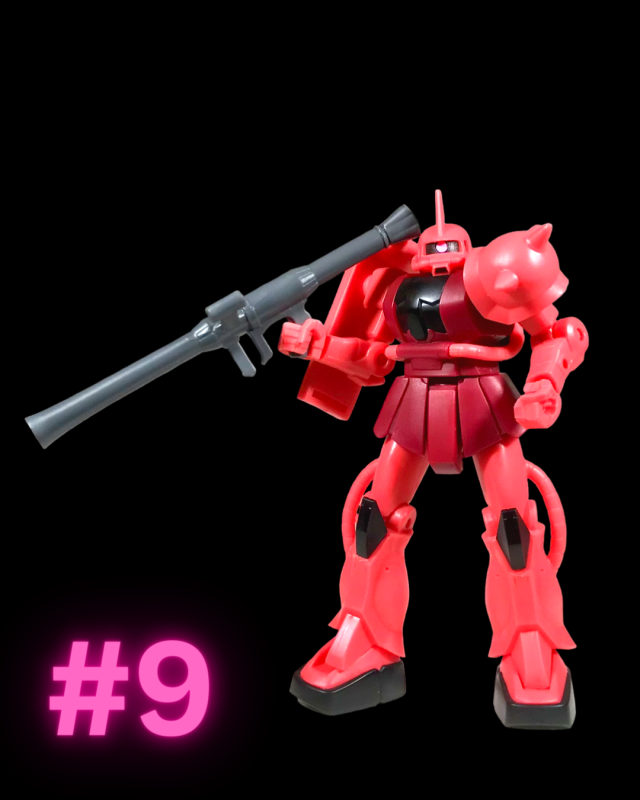 Gundam Infinity figures are cheap and simple. They’re not high end collectibles or even action figures made with adult collectors in mind. They are inexpensive, sturdy little things you can buy for under $15. 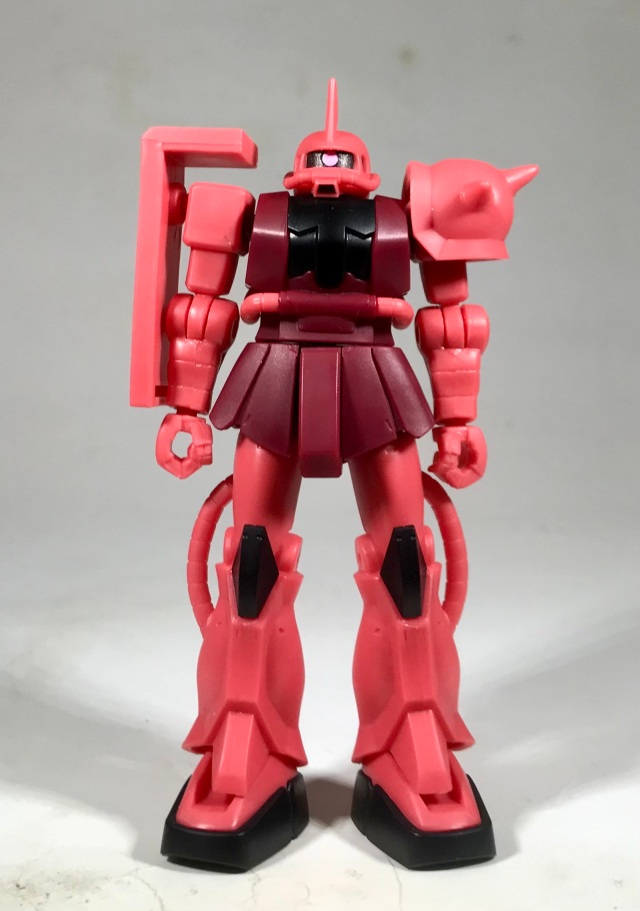 The articulation is decent, but the range of motion is limited. But that’s okay, since these are toys in the purest sense. They’re a little bit bigger than old Gundam MSIA figures, but fit in with that line (and some others like Mobile Suit in Pocket and G-Frame) pretty well. 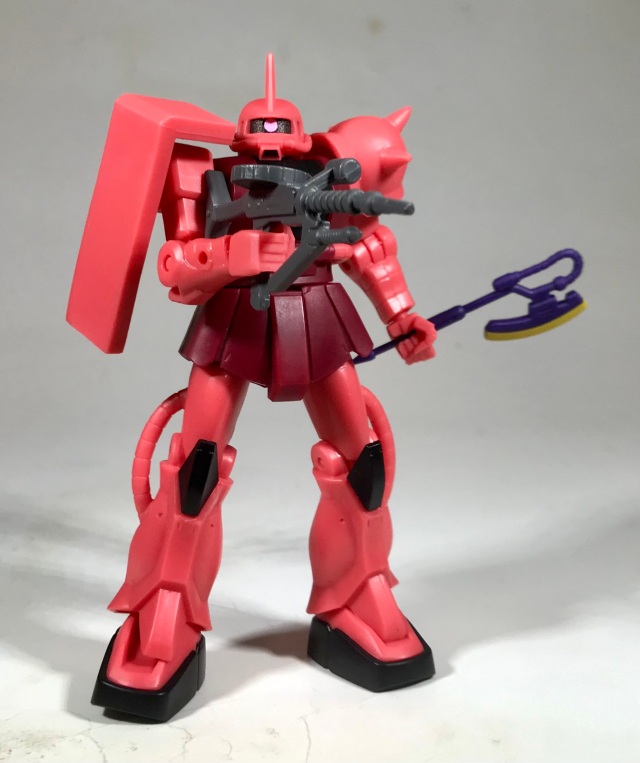 Char’s Zaku has a nice sculpt and good colors. It also comes with all of the accessories it needs. That is not a flashy item, but it is a very fun toy. It was my favorite of all of the mass retail release Gundam Infinity figures this year. I had a great time playing with it and photographing it. It’s not as good as any of the toys higher on the list, but it’s great in its own right. 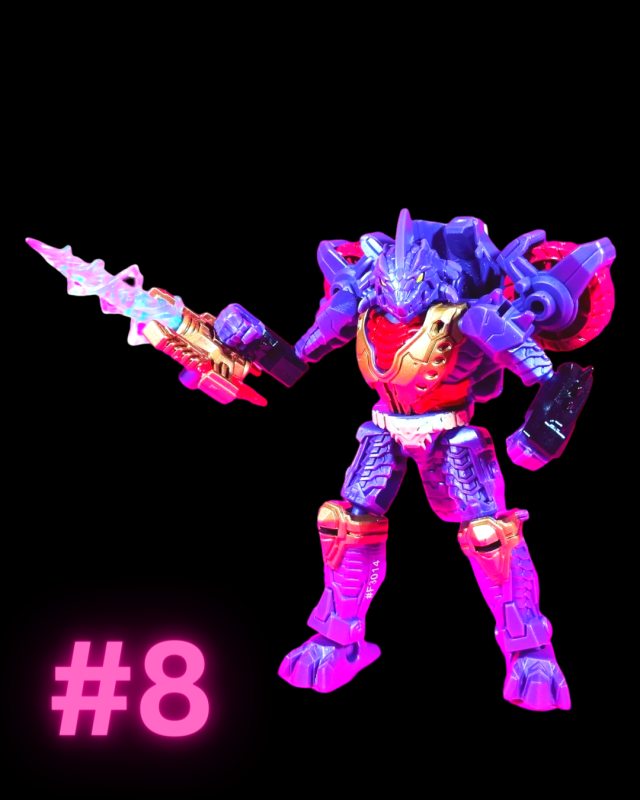 I grew up with Pretenders, so I’ve loved them since an early age. I’m always excited when Hasbro revisits any of the characters. 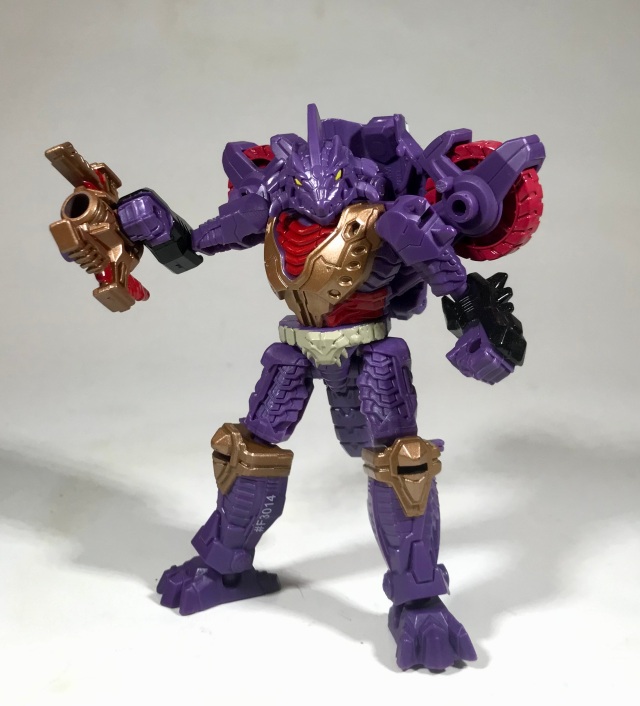 I never had G1 Iguanus as a kid, but the design is great and that original toy stands strong with all of the other original Decepticon Pretenders. If you want to know more about that one, check out my friend Drac’s review. 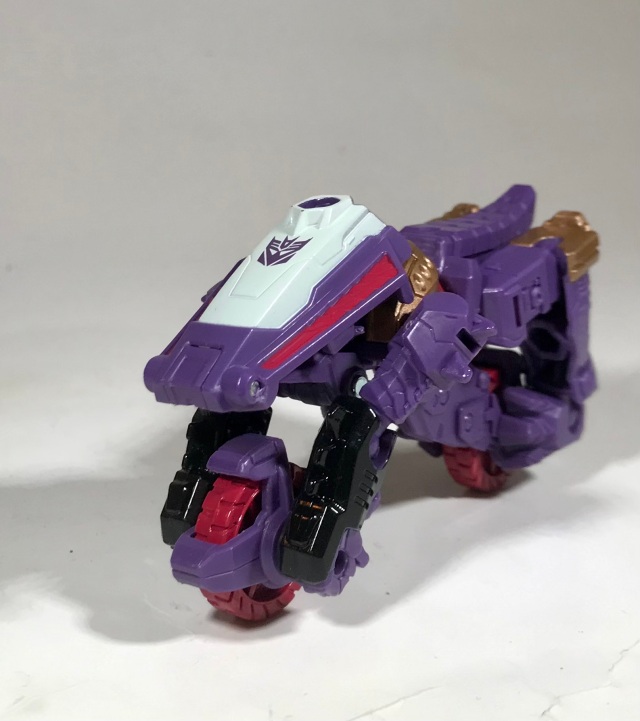 Legacy Iguanus looks great in both modes, is sturdy and fun, and has all of the articulation he needs. The weapon is a bit weak, but becomes cool once you start using Siege blast effects with it. This is just a great little robot lizard motorcycle man toy, and that is enough. 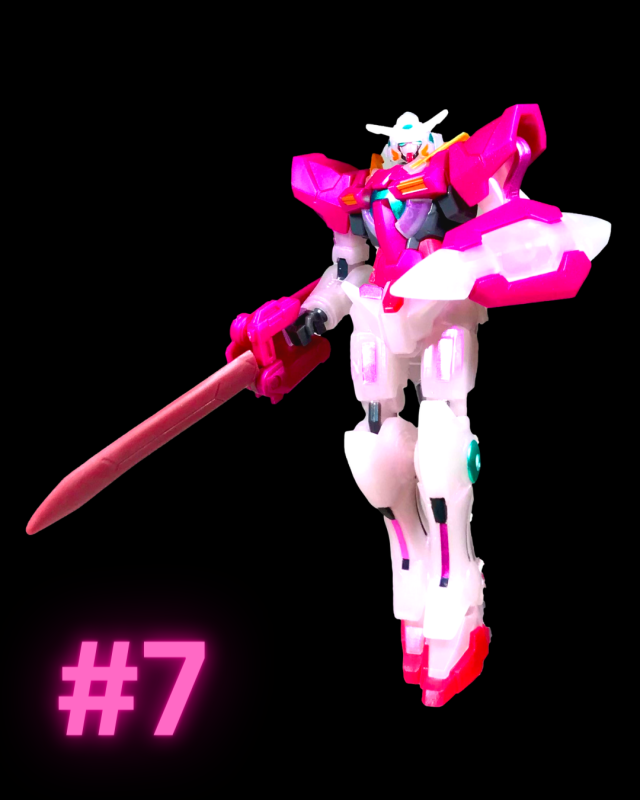 Everything I said above for Char’s Zaku pretty much goes for Gundam Exia here. It’s not a fancy toy by nature. It was, however, a convention exclusive– so it at least gets fancy paint! 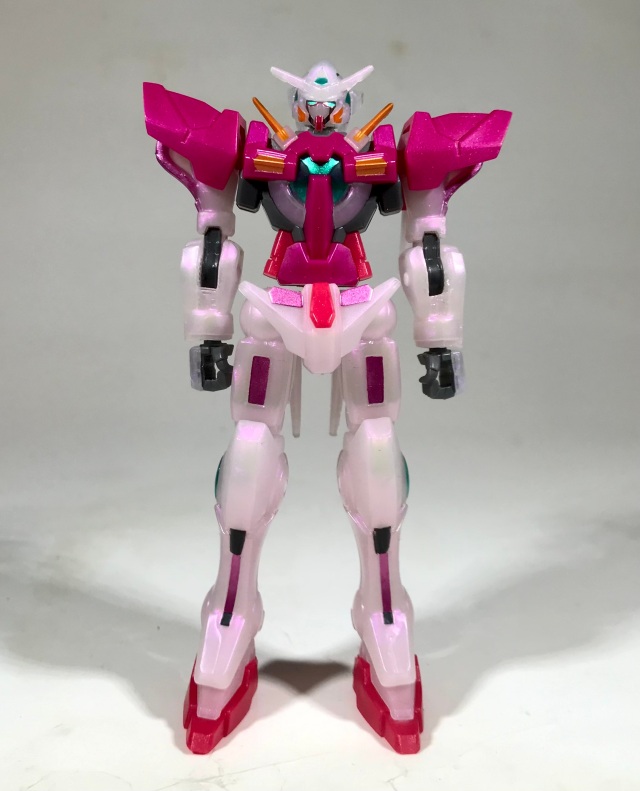 The toy’s deco is gorgeous. I cannot stop looking at it. It’s also very fun to play with, unlike its older MSIA counterpart. That toy comes with all of Exia’s trademark weapons and has much better articulation than this one, but it’s also a fiddly mess that is absolutely no fun to play with. I hate it. 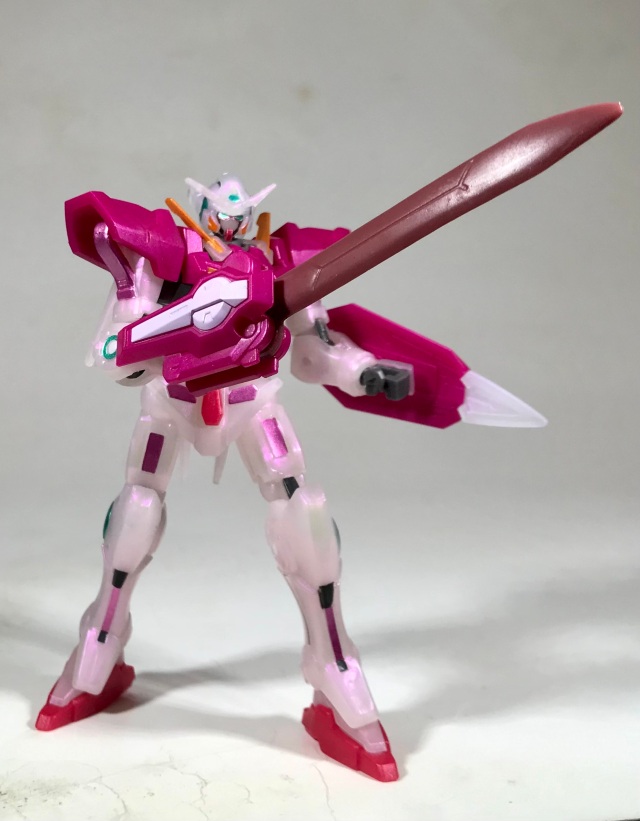 The Gundam Infinity Exia is fantastic, though. It beats the MSIA as a toy in every regard. It only comes with its GN Sword and Shield, but those are enough to make look great and serve as a fun toy. Even if you like the old MSIA, Bandai never released a Trans Am mode Exia in that toy line, so this one really stands out in a Gundam action figure collection.

#6 – Masters of the Universe Masterverse Catra from Mattel 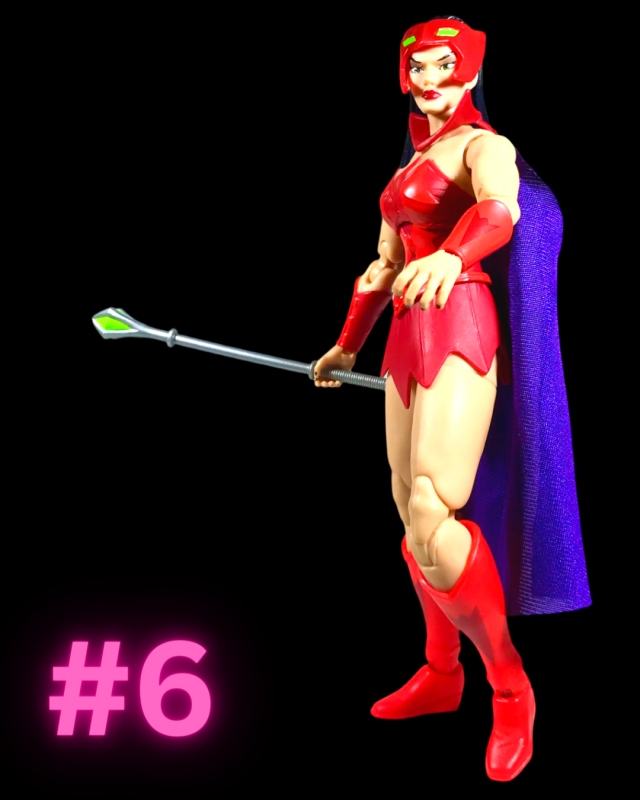 Catra is one of my favorite MOTU characters, but she seldom makes it into action figure lines. I much prefer MOTU Origins over Masterverse, but there was no way I wasn’t buying a brand new Catra figure. 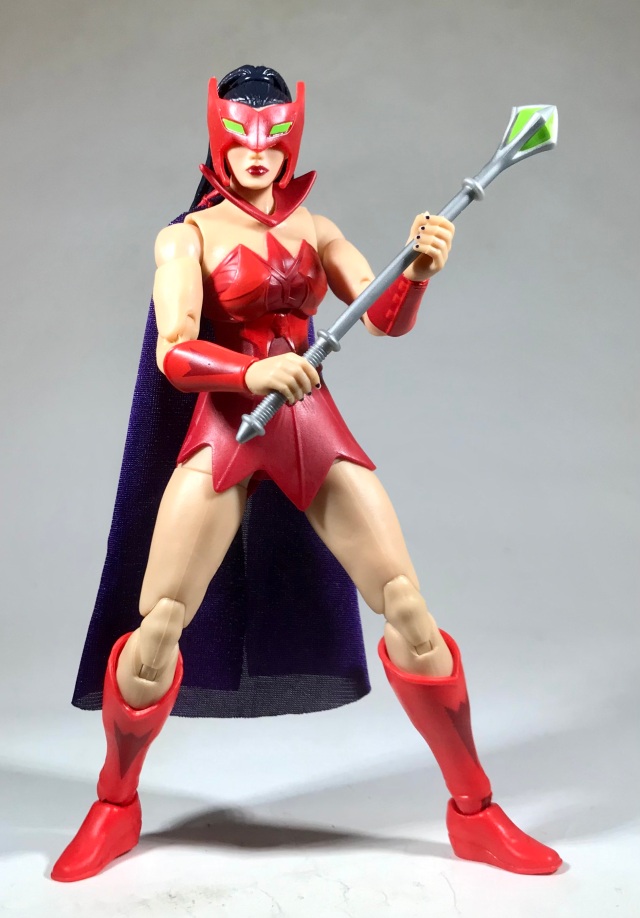 In my earlier mini-review of this toy, I said it didn’t look quite as good as the old MOTU Classics version, but I’ve since changed my mind. I think this Catra looks nicer in every department but paint. 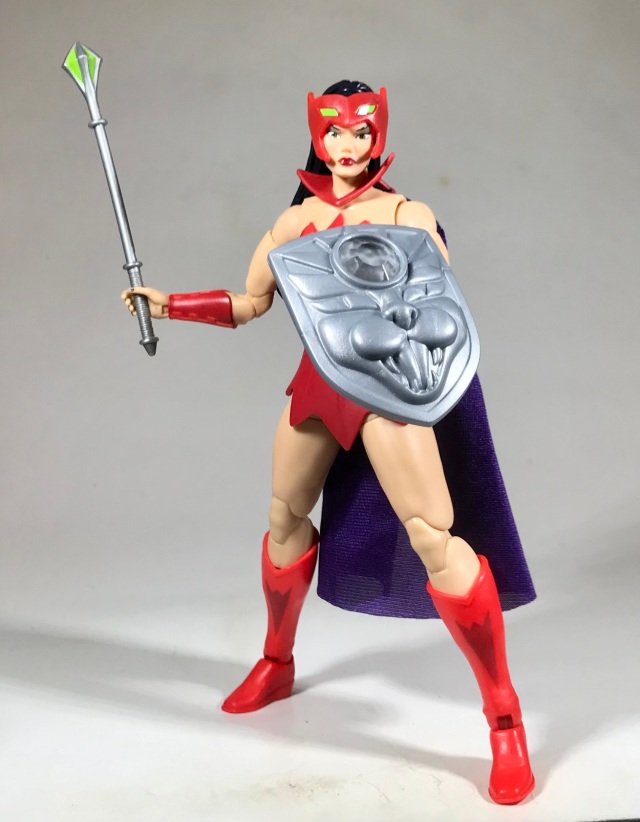 I love the toy’s sculpt and articulation. The cloth cape looks good, too. I’m not 100% sold on Masterverse Catra’s weapons, but I adore everything else about the figure.

If you know me, you know that I am basically obsessed with Azrael and his time as Batman in the 90s. I read Knightfall at a pretty young age and it left a huge impression on me, which is why I have a whole shelf dedicated to various Azrael figures. 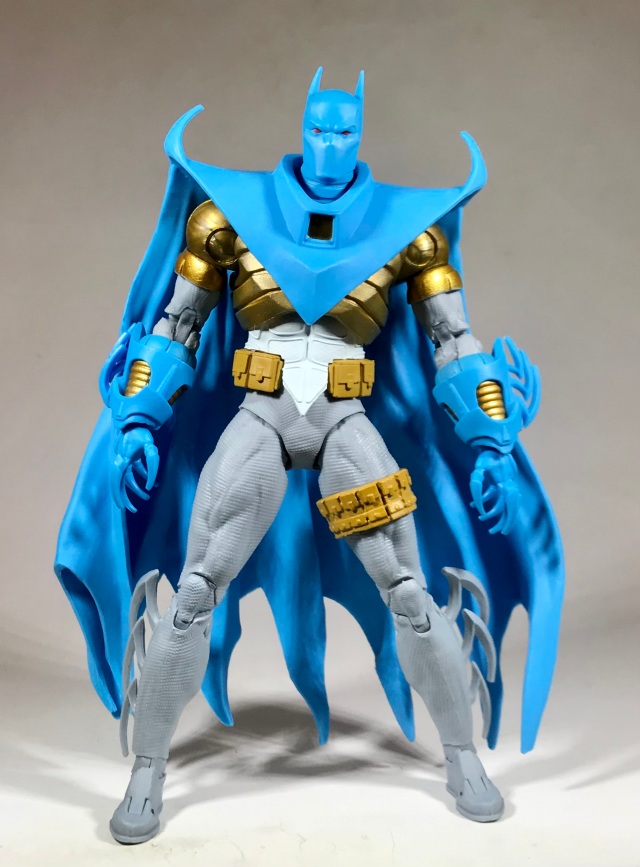 I opted to get the Todd Azbats instead of the high-end Mafex Azbats mostly because of the price, but I was very impressed with this figure once I had it in hand. The sculpt and articulation are amazing. This is a beautiful Azbats toy that does something a bit different than any of the old DC Universe Classics versions. 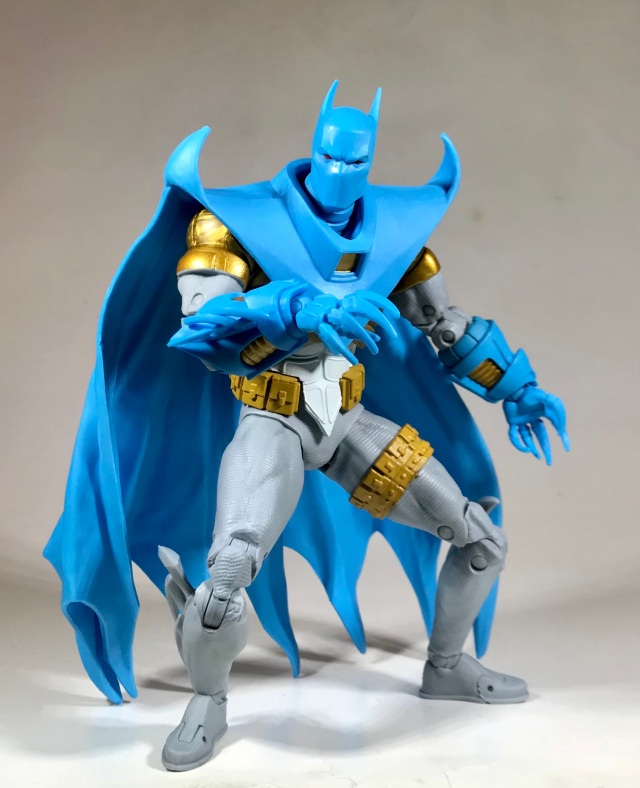 Todd is usually pretty stingy with the accessories in the DC Multiverse line, and that’s one area where Azbats disappoints. He only comes with a figure stand. Still, the figure is a blast to pose and play with and it looks great alongside the rest of my  many Azraels. 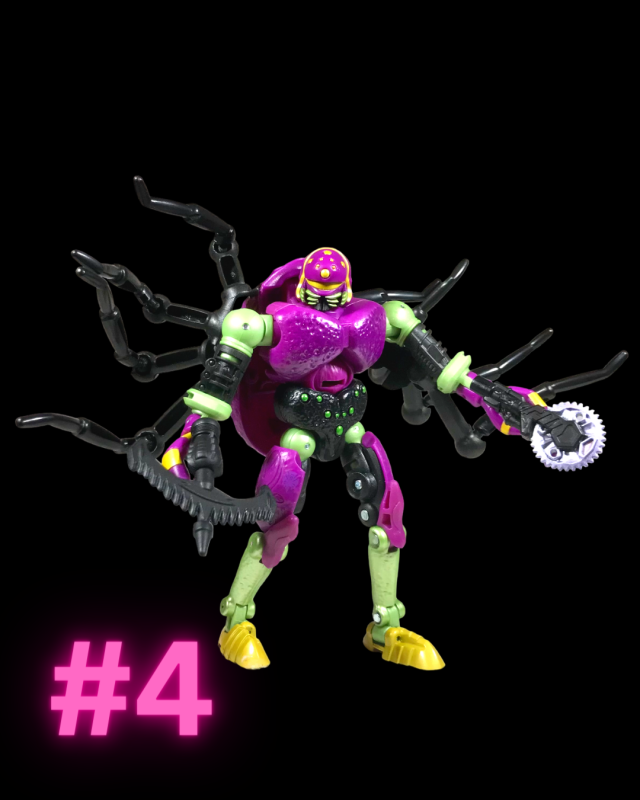 I’ve really been enjoying Hasbro’s attempts at reimagining and updating the Beast Wars cartoon main cast over its Kingdom and Legacy toy lines– for the most part. Some of the newer Beasties from Hasbro are a lateral move from the old 90s toys, but some of them knock it out of the park. 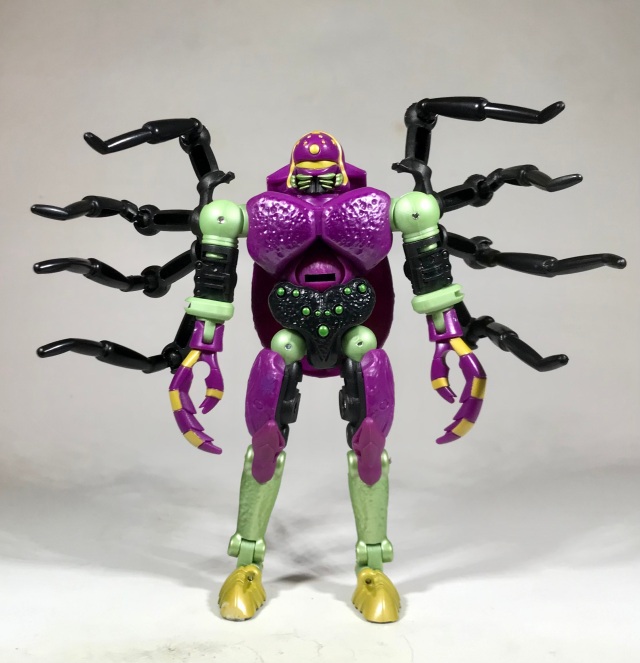 Tarantulas knocks it out of the park. As with most main line Transformers, there are some minor QC issues and paint slop here, but the figure is still a blast to pose, transform, and play with. 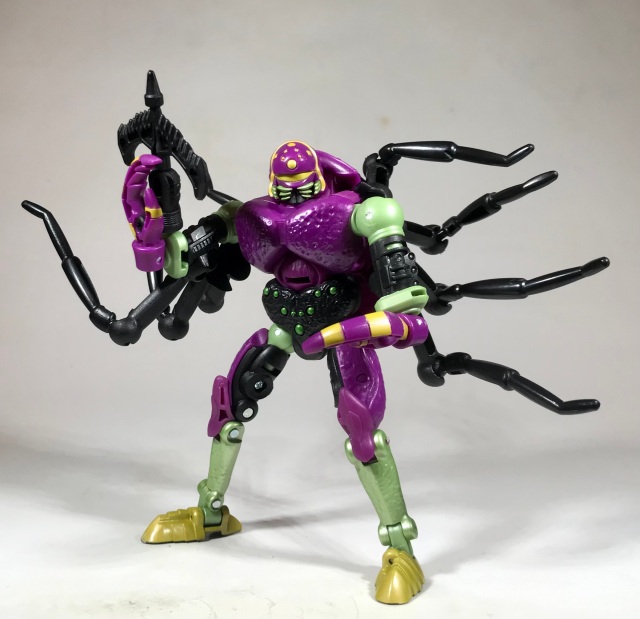 Hasbro was also pretty generous with the accessories. Tarantulas gets his trademark missile crossbow thingy, but also gets a cool buzzsaw that homages his Transmetal form. It’s also a really cool accessory for a mad scientist to come with. I really love the original Beast Wars Tarantulas figure, but it’s also great to have such a good update that almost perfectly replicates the character’s on-screen appearance. 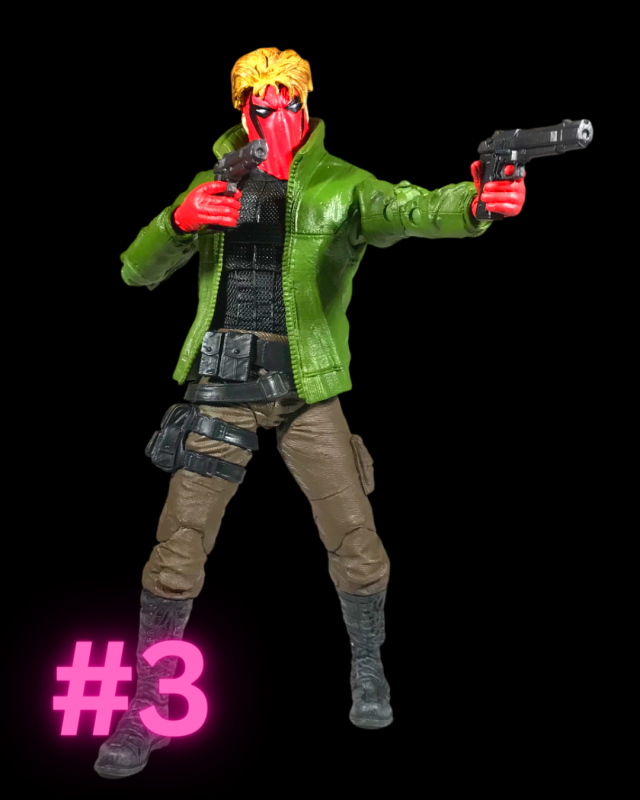 Okay, we all know I love the 90s. And we all know that there’s nothing more 90s than WildCATs. So it’s pretty much a no brainer that I love WildCATs. The old cartoon is kind of a dud, but the comics are generally great, regardless of era. The old Playmates toy line as also fun. 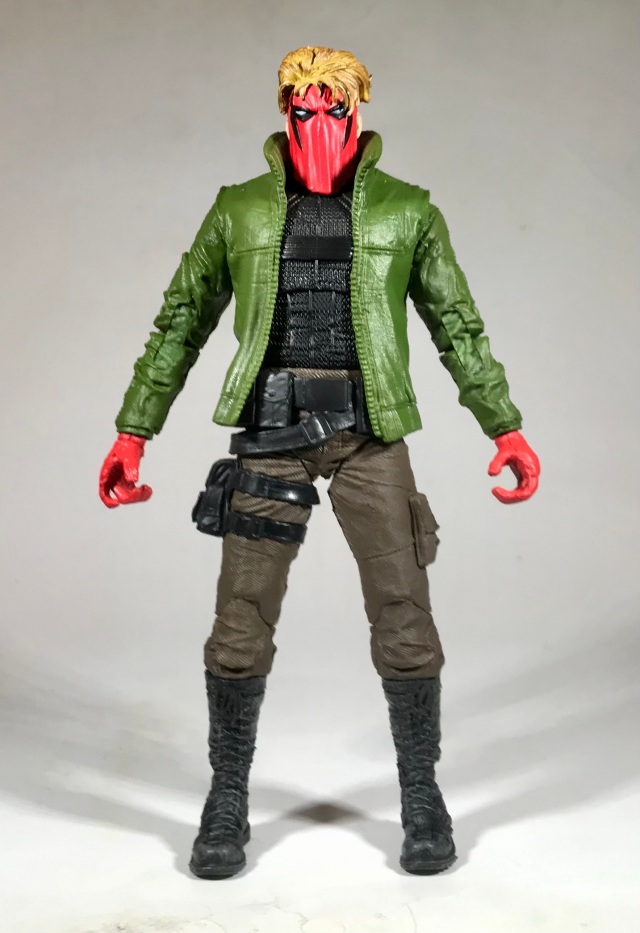 This isn’t Grifter as he appeared in the 90s– this is a more modern version, but it also evokes Grifter’s look from Joe Casey’s classic WildCATs 3.0.

Because Warner Bros. won’t let Todd release any DC figures with guns, Grifter came with a sword and a knife. But you can buy the super-convenient Todd Weapons Pack DLC to give Grifter his much-needed pistols, and he looks perfect with them. This toy has beautiful paint, a perfect sculpt, and great articulation. You just need to find him some guns from somewhere.

#2 – Masters of the Universe Origins Sun-Man from Mattel 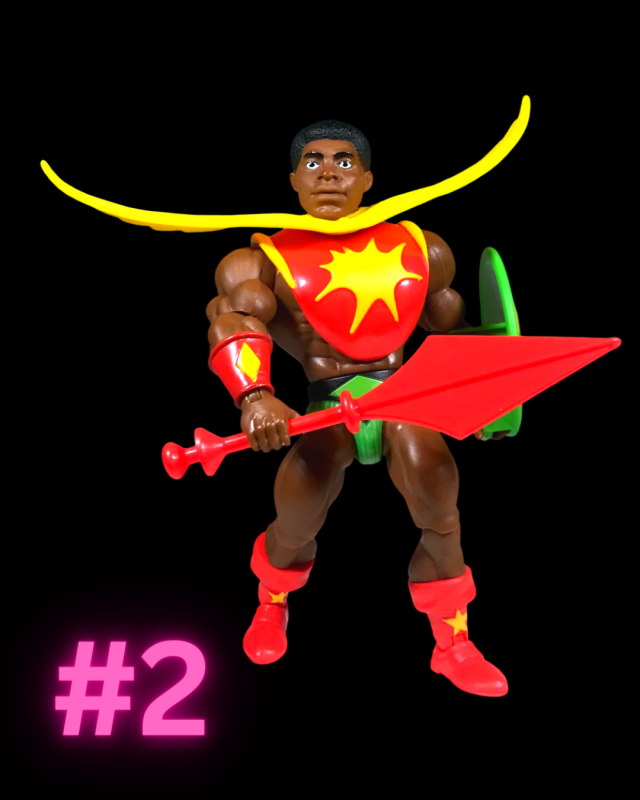 It’s been an amazing year for MOTU Origins, so it was pretty hard to pick a favorite. Sun-Man won out, though, for a few reasons. 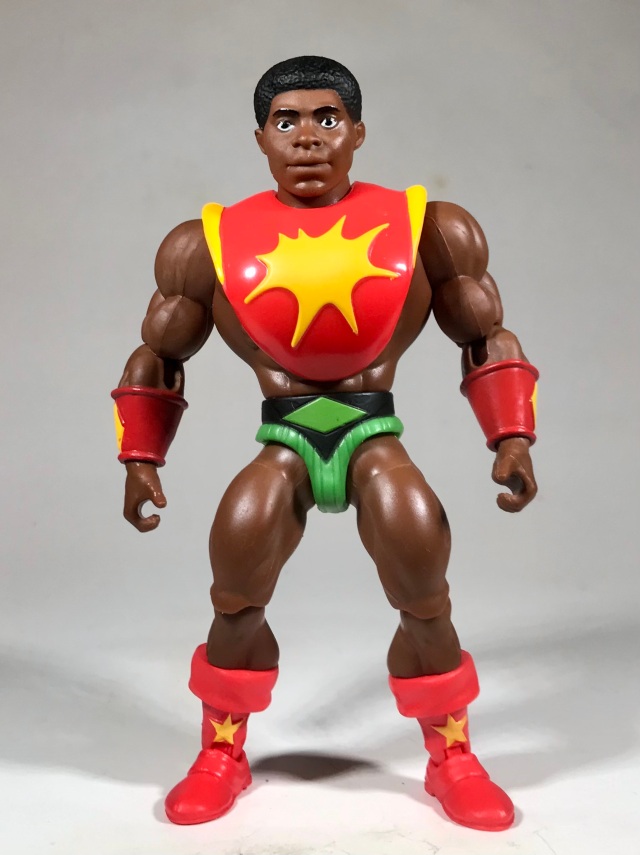 First, the design and colors are amazing. This is an eye-catching figure that just looks cool in any pose you put him in. I’m not sure what his huge bladed weapon is, but it looks incredible, especially when wielded alongside his colorful shield. The shoulder wings are a little silly, but in the best way possible. 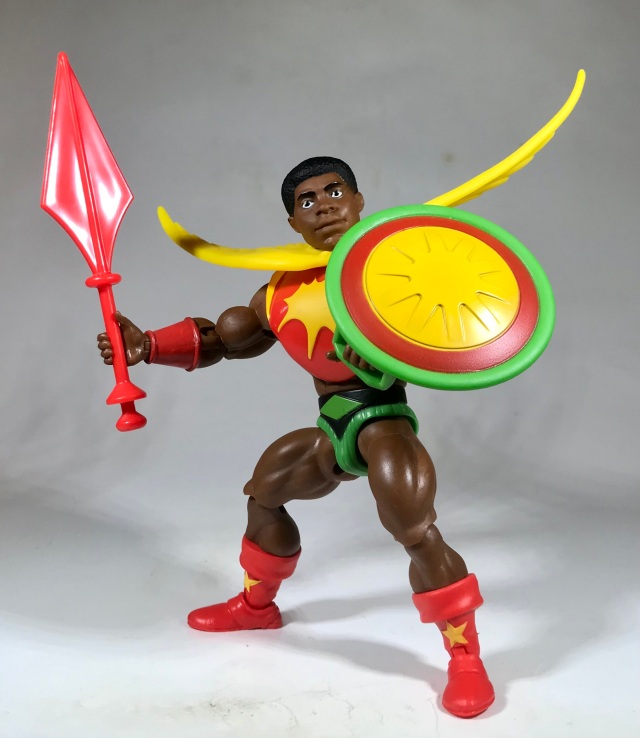 It’s also great to see Mattel folding Olmec Toys’ classic Sun-Man characters into MOTU. They fit in really well and add a whole new dimension to the lore and the toy line itself. I love everything about this toy, but I also love what it represents. This is a can’t-miss action figure. 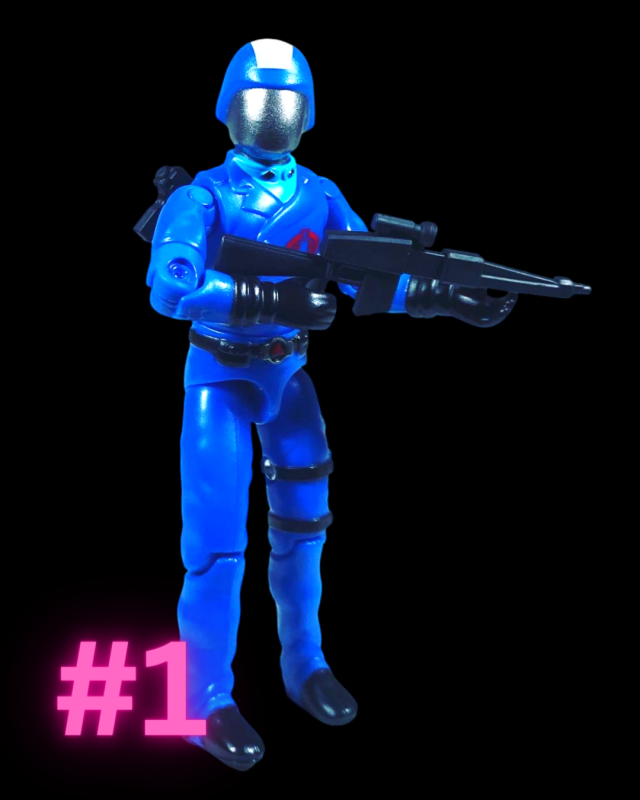 This figure just does so many things right. It’s got the classic Cobra Commander look, but it’s not a fragile toy from the early 80s that you’re afraid to play around with too much. It also looks different enough from the original 83 Cobra Commander that is holds its own place in the vast world of o-ring GI Joe figures. 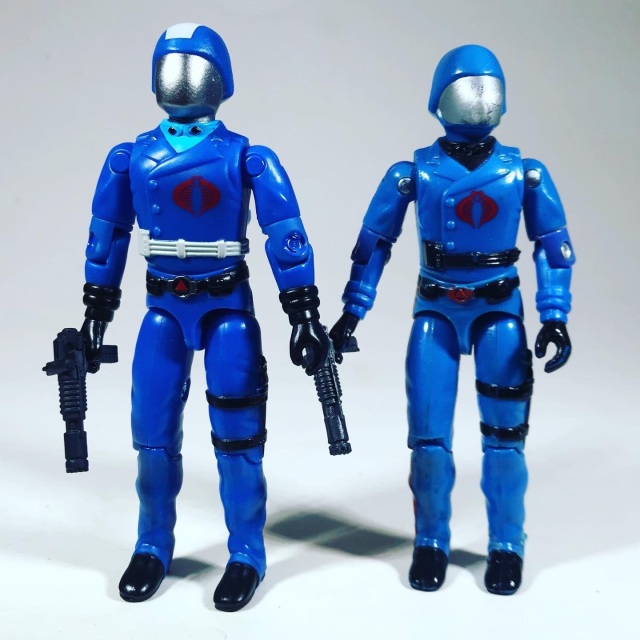 It’s also a new o-ring GI Joe figure! And it’s good. There are no weird, immobile joints or paint problems. It looks sharp and clean. It also comes with a huge wealth of accessories, like 4 guns, a snake scepter, and a time bomb. And there’s even more than that! 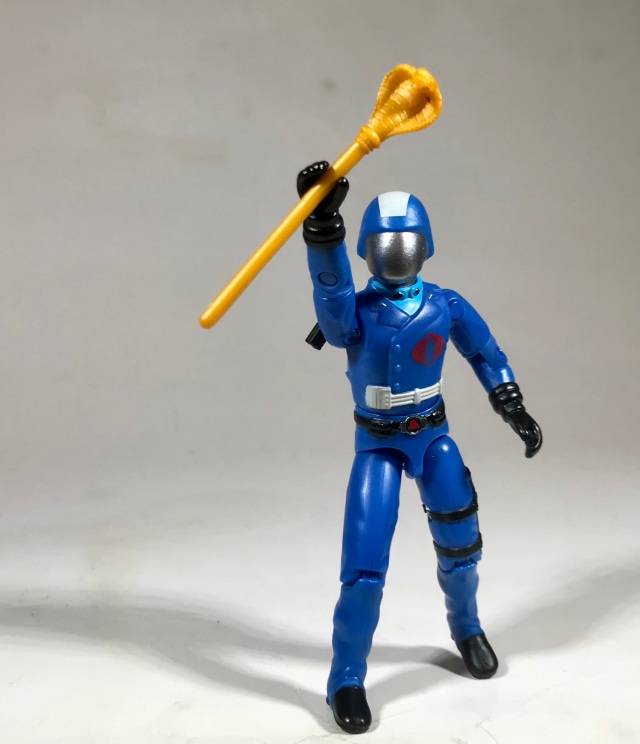 This might actually be my favorite-ever Cobra Commander figure. It’s got the iconic CC look that just can’t be beat, but the paint and colors elevate it above everything else. This is the perfect Cobra Commander toy, and you can actually play with it without worrying!

It is beautiful and it is easily my favorite toy of 2022. 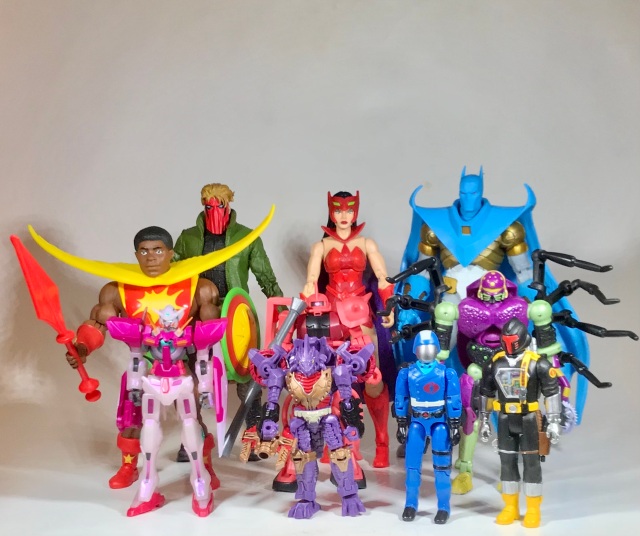 Thanks for joining me, everyone! I hope you all have a safe and happy new year.

Please feel free to tell me about your favorite toys of 2022 in the comments.