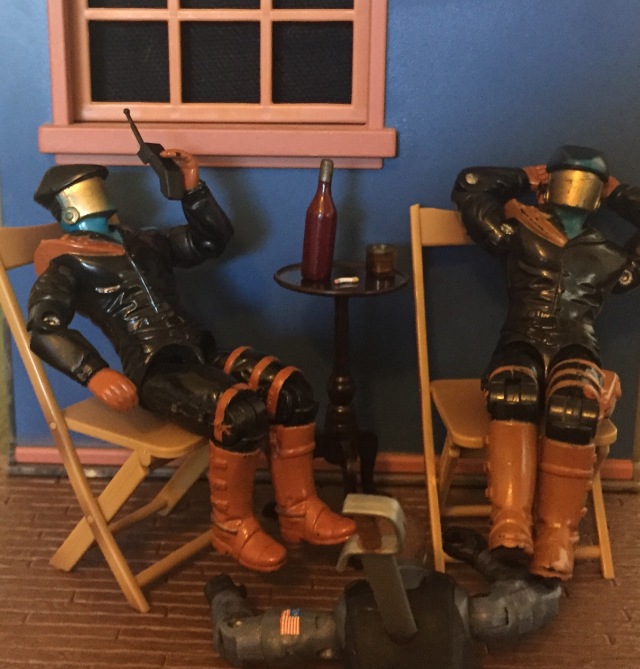 Cobra’s elite street level guards, the HEADHUNTERS, are ruthless, highly trained, and picked from the best Cobra has to offer. In order to meet the daunting Headhunter qualifications, a Cobra soldier must have a high school diploma, a GED, or any Warsaw Pact equivalent. Vetting for Headhunters is so extreme that candidates must pass a gruelling algebra test, know where the safety is on a 9mm pistol, be able to name four Bob Marley songs, and have a valid driver’s license. Former food service workers with more than four customer complaints are also heavily considered. Once a Cobra soldier becomes a Headhunter, they can look forward to standing around behind HEADMAN in a variety of dark alley and nightclub situations. The only thing Cobra Headhunters love more than sticking it to GI Joe is selling weed to undercover cops.

From the files of Cobra Commander: “Headhunters? Oh, yeah. Those guys are okay. You can hit them up on their beeper at 3am, and they’ll be at your house in under 30 minutes with whatever you need. And I do mean whatever you need. Well, kind of. I usually just end up with a bag of dirt weed (mostly seeds and stems), some prescription cat valium, and a frozen Tony’s Pizza. But, let’s be honest, that makes them more elite and dependable than 90% of my forces. That Headman guy, though? Fedora, ponytail, goatee, or bandit mask– you only get to pick one! Cripes, what a doofus.”