According to a source in a former Soviet country (who has also translated the card backs), the entire Russian run of Funskool GI Joe figures was released in 1998. The company who assisted in this release, Two Beetles (see their logo on the card back below), likely had a connection at Funskool. Aside from Chuckles, all Russian Funskool figures are nearly identical to their Indian counterparts– only the card backs were changed. Though these were reportedly only produced for a year, they can still be found in former USSR territories. As a fun side note, “beetle” is Russian slang for “swindler.”

Most reliable sources tell me that Russian Funskool GI Joe Mainframe was released sometime around 1998, but there is always some room for error with exact Funskool release dates. Despite the fact that this figure is about 24 years old at the time of this writing, people in former Soviet territories still report seeing these figures in stores from time to time.

Russian Funskool Mainframe, much like the Indian version, was produced entirely from the 1986 Hasbro Mainframe mold. And, unlike many Funskool figures, the foreign and domestic versions are nearly identical. This Russian figure includes the exact same accessories as both the Hasbro version and the Indian version.

Like all Funskool figures, this version of Mainframe is made from slightly lower quality plastic than its Hasbro counterpart. 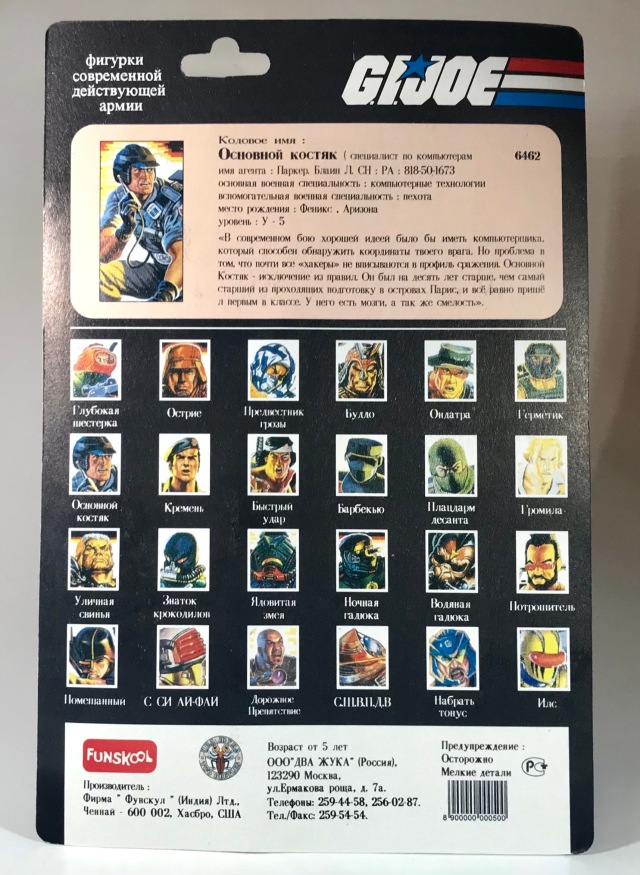 Funskool packaging is also made from a much flimsier cardstock than Hasbro packaging.

Though there may be some production variants of Russian Mainframe, note that the only real difference between the Russian and Indian versions is the back of the figure’s card.

Russian Funskool GI Joe Mainframe is cast in light grey and flesh tone plastic with some bits of black, silver, and red paint. It’s a simple but effective color scheme. As far as I can tell, the figure is not missing any paint applications present on the Hasbro version.

The paint is a bit sloppier than what you might see on a Hasbro version, but it’s still pretty good on this particular figure. There are no real issues and it looks exactly as it should, a little tiny bit of paint slop aside. 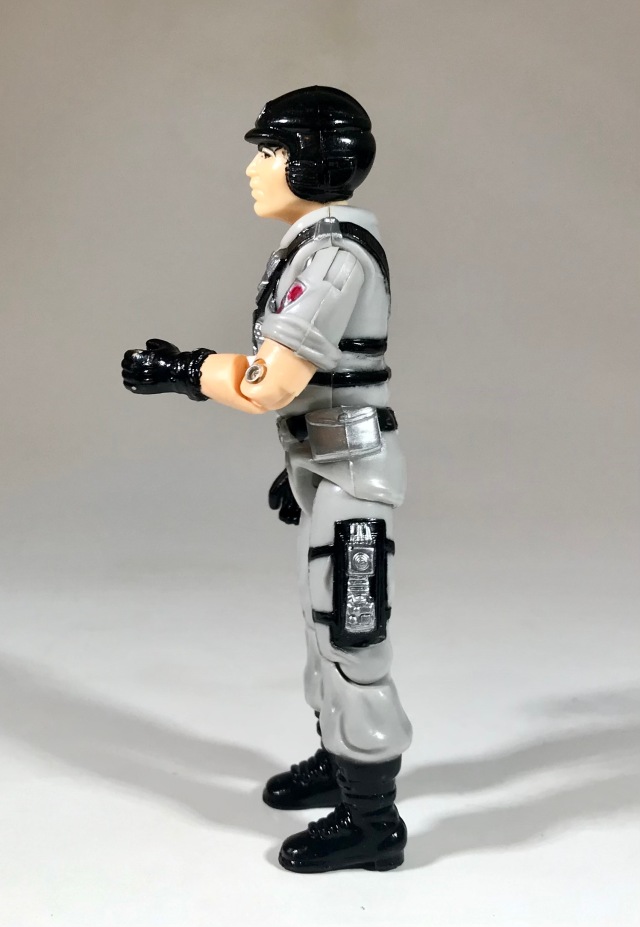 Minor paint slop aside, the quality on this figure is pretty good– except for one big thing. You maybe noticed it in the “carded figure” photo.

Some, but not all, Russian Funskool GI Joe figures used plastic t-hooks to hold their bodies together, instead of the usual metal t-hook. This figure originally included a plastic t-hook, which shattered under pressure from the figure’s rubber o-ring while it was still in the package.

I replaced the broken t-hook with a metal one from a broken figure and it now functions just fine. So, if you’re planning on buying some Russian Joes, make sure you have some extra t-hooks around.

Russian Funskool GI Joe Mainframe comes with a grey backpack, a grey handheld computer, a grey microphone, and a standard Funskool accessory hose. It’s the same loadout of gear that comes with the Hasbro version.

Some Funskool hoses feel a bit brittle or “crispy,” but this one works just fine. All of the accessories work as intended with the figure. He can hold his microphone and computer, the backpack fits securely, and the hose attaches to both the mic and backpack with ease.

As far as accessories go, I have no problems or concerns to report.

The Figure All Geared Up: 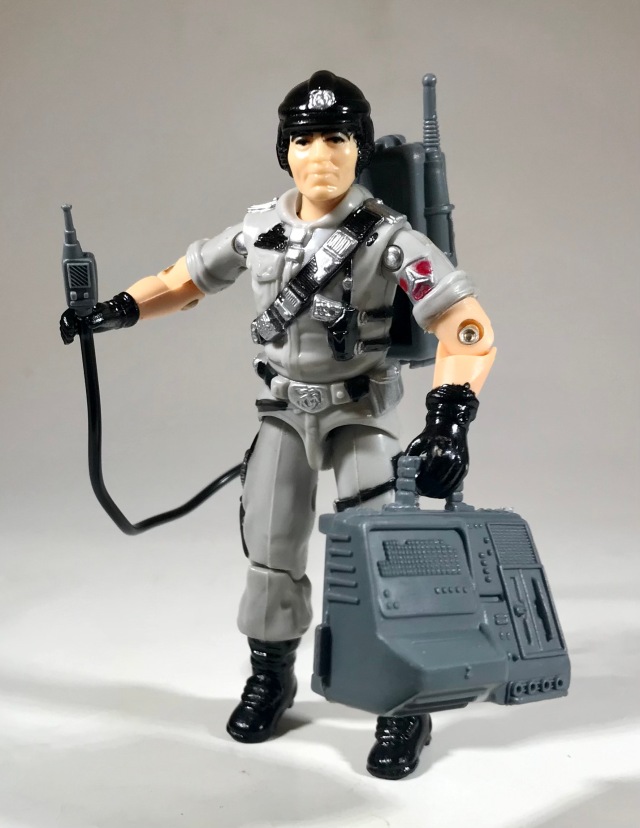 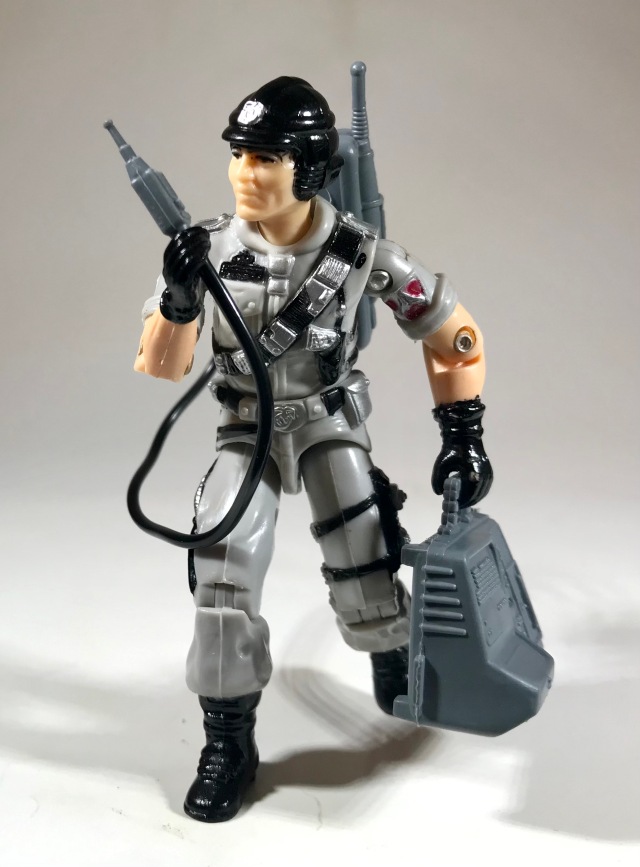 Other than the weird plastic t-hook, this is a high quality figure that looks great and performs just how it should.

Like many of the figures Funskool and Two Beetles released for the Indian and Russian markets, this Mainframe figure is very similar to the Hasbro release. In fact, it lacks most of the whimsy and strangeness that many people associate with Funskool GI Joes. In this case, the foreign and domestic releases are almost identical.

As stated previously, this figure is exactly the same as the Indian release, other than the packaging and possibly the t-hook.

The differences here are pretty difficult to point out. Both the grey and flesh tone plastics are a slightly different color on the Funskool version and the paint is a bit sloppier, but that’s it. The silver paint seems a bit shinier on the Funskool Mainframe, but that could just be my eyes lying to me or a difference in the age of the figures. 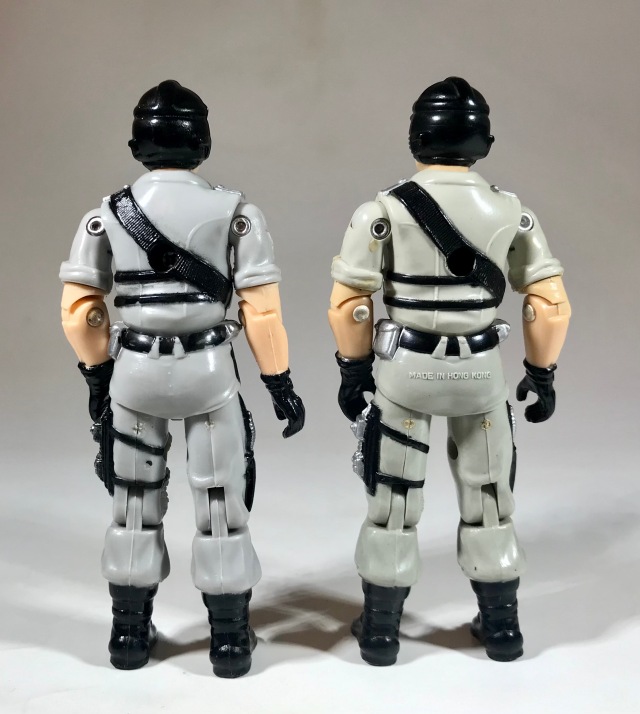 You can view the date/brand stamp difference here, too. I’m not very interested in those things so I’ll leave it up to your level of curiosity and detective skills.

Sorry, I don’t have the microphone from the Hasbro version to show you. The differences here between the computer and the backpack are pretty minimal, and you’d have a tough time telling them apart unless they were side by side. The Funskool release uses a lighter grey plastic.

Overall, there’s not much here to differentiate the Russian Funskool Mainframe figure from the Hasbro version. Unless you’re a completist or love foreign figures, you’re probably fine with picking just one or the other.

Did I miss anything? If so, let me know via social media or vy using this site’s contact page.