The Russian Funskool GI Joe Chuckles was released sometime around in 1998. Interestingly, this figure was only released in the Russian market. No Indian Funskool Chuckles figures are known to exist.

From Mike T of Forgotten Figures:

“The two oddballs are Ripper and Chuckles. A store in India ordered an exclusive run of Ripper figures. (You could do that if you bought enough. I think the number was like 3,000 figures.) So, that got the Ripper mold into production for a short time. Only one American dealer got any, but they also appeared in this Russian set.

Chuckles never showed back up again on Indian cards in the 2000’s. It’s very weird that he ended up in the Russian set, but never on an Indian card. I’m guess that no store in India wanted to take a chance on a large lot of Chuckles figures. But, it shows that Funskool had the mold in the 2000’s and may have even kept it.“

Note that the card back features all Russian text, including for the character names on the cress sell– this makes it very different than Indian Funskool cards.

The figure is similar to Hasbro’s 1987 Chuckles, but there are some key color differences. We will cover those more in-depth when we get to that comparison a little later. At a glance, though, you can tell this Russian Funskool GI Joe Chuckles uses a different blue than his Hasbro counterpart. 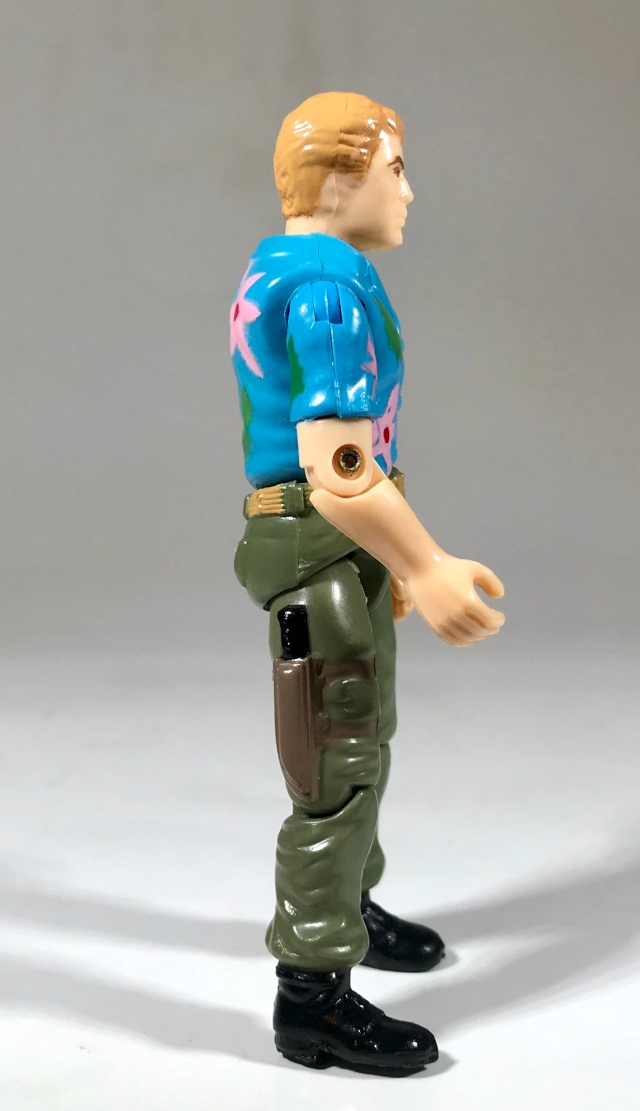 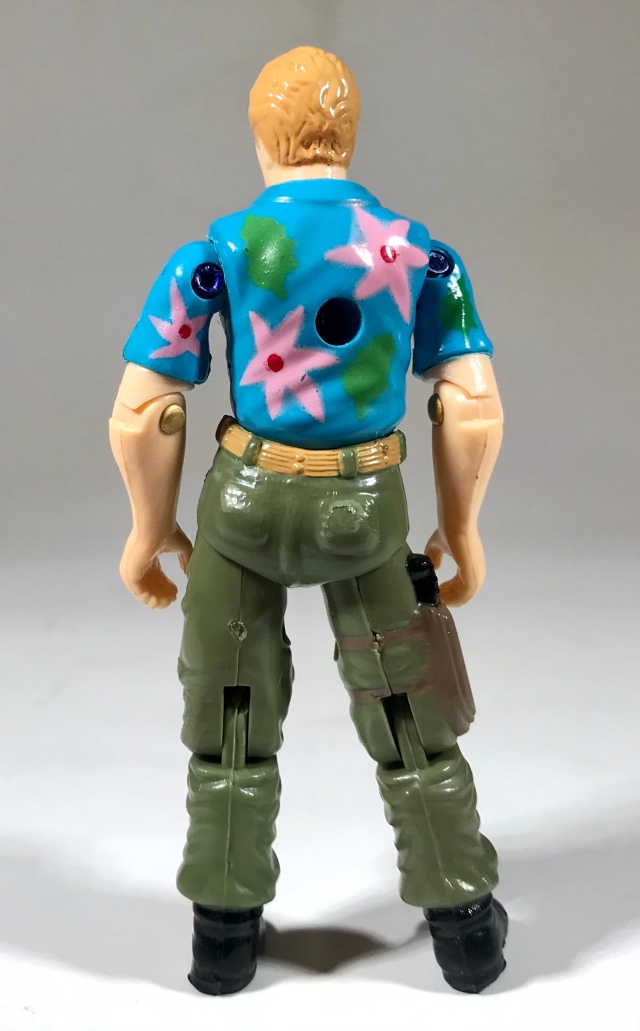 Russian Funskool GI Joe Chuckles comes with a brown holster and a black pistol. The shoulder holster is made of a softer plastic, and fastens around the figure’s body with a tab and slot system. Russian Chuckles’ accessory loadout is the same as the Hasbro version’s.

I’ll note that is’s a huge pain in the ass to both equip and remove the holster.

Russian Chuckles All Geared Up: 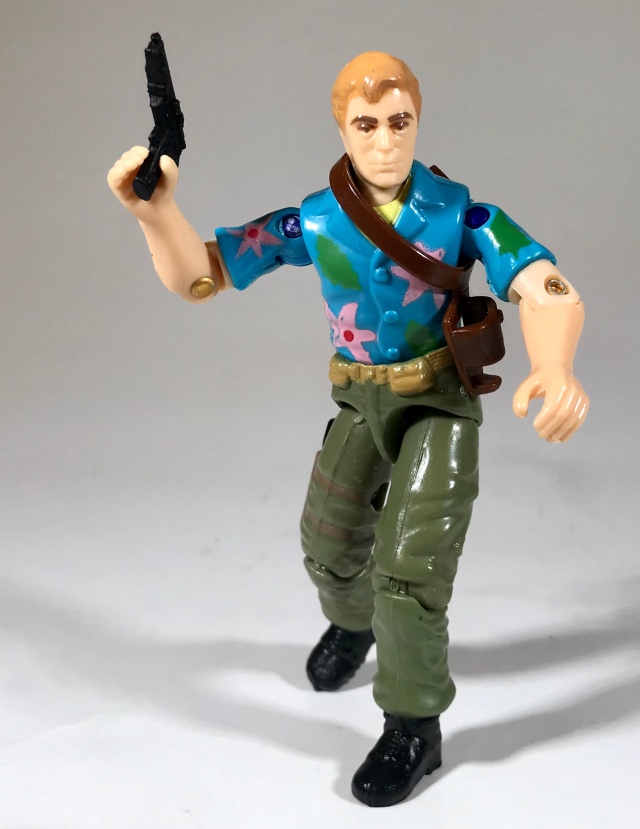 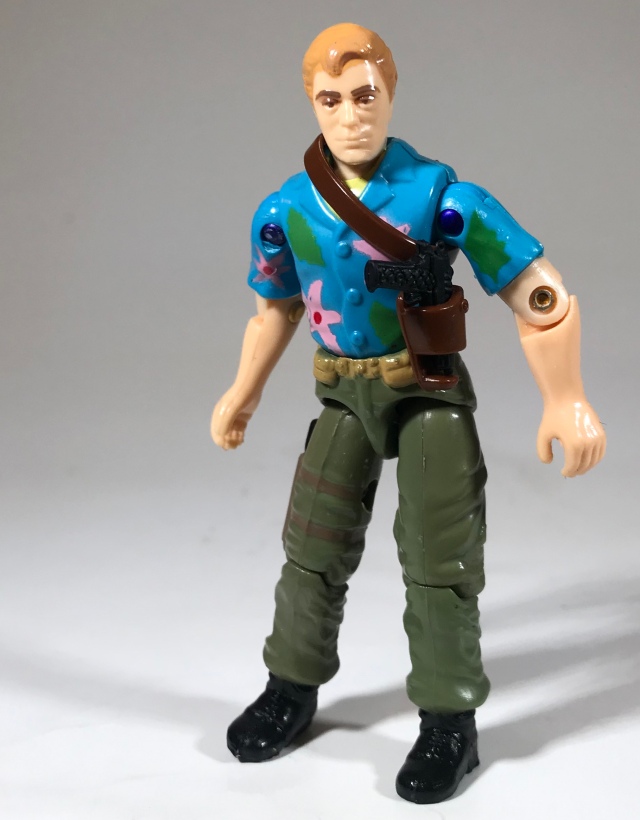 The figure holds its pistol nicely and the holster fits well. Though the plastic quality isn’t quite as good as what Hasbro used in 1987, this is a solid, high-quality GI Joe figure. I have absolutely no complaints about aesthetics or function. 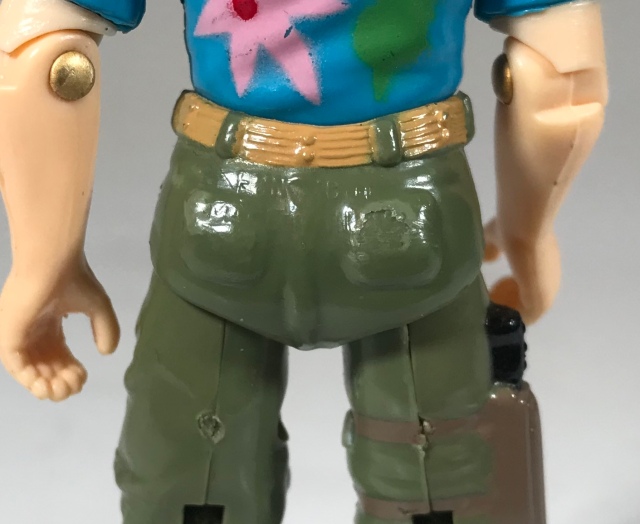 Russian Funskool GI Joe Chuckles has a Hasbro brand stamp on his rear end, and no other date markings that I can find. It is slightly different than the country of origin stamp on the Hasbro version.

There are numerous color differences between the Russian Funskool GI Joe Chuckles and the 1987 Hasbro Chuckles, both obvious and subtle.

The figures from the front (L – Russian Funskool, R – Hasbro):

Russian Funskool Chuckles’ shirt is a deeper, richer blue than the Hasbro version’s, and his pants are also a darker green. His belt is slightly darker, as well, and his arm rivets are a much darker cobalt blue. The paint for his knife straps are lighter and his hair has a redder hue.

On the upper body, where the shirt is “unbuttoned,” Russian Chuckles features yellow instead of flesh tone. Although this was probably intended to be flesh tone to match the figure’s head and neck, it ends up looking like Chuckles is wearing a yellow undershirt beneath his festive tropical button-up. That probably was not what the designers and factory intended, but it still looks good. 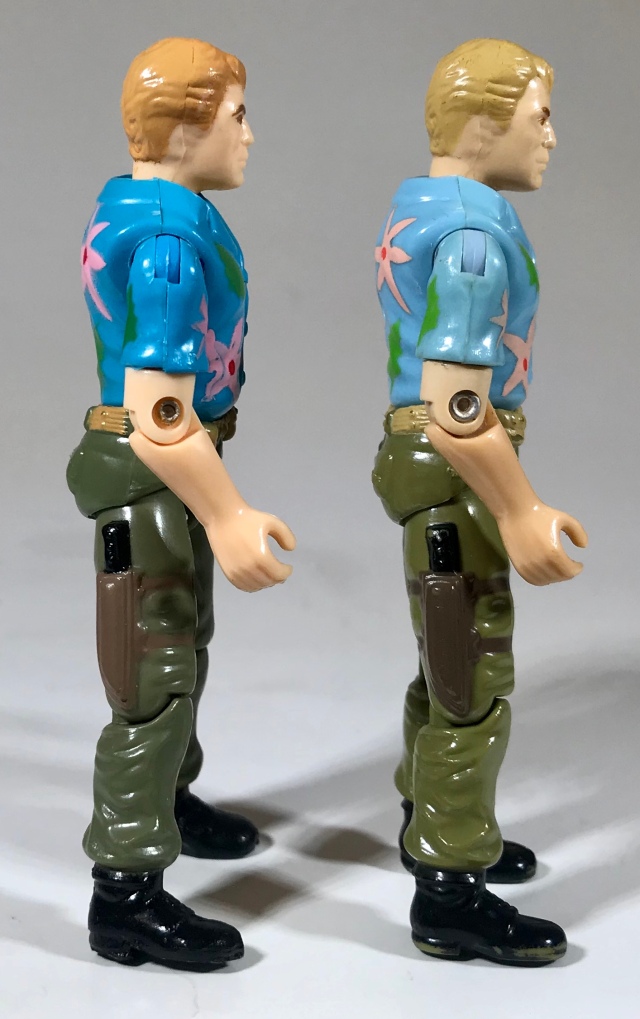 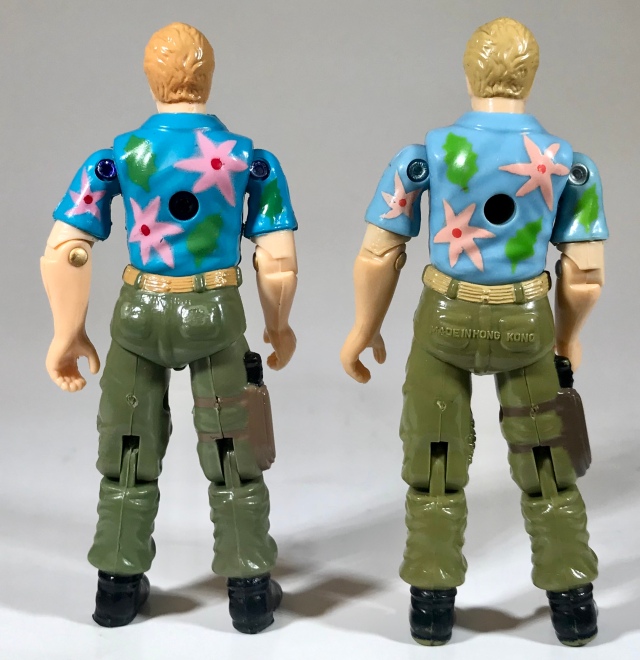 Note the country of origin stamp– it’s different on each figure. Luckily, though, you can tell which figure is which at a glance without the need to look at any factory stamping.

I don’t have the Hasbro Chuckles’ accessories to compare them to the Russian Funskool version. From photos, it looks like the 1987 Chuckles’ holster might be a slightly lighter brown. The pistols are identical, as far as I can tell.

All ARAH-style versions of Chuckles: 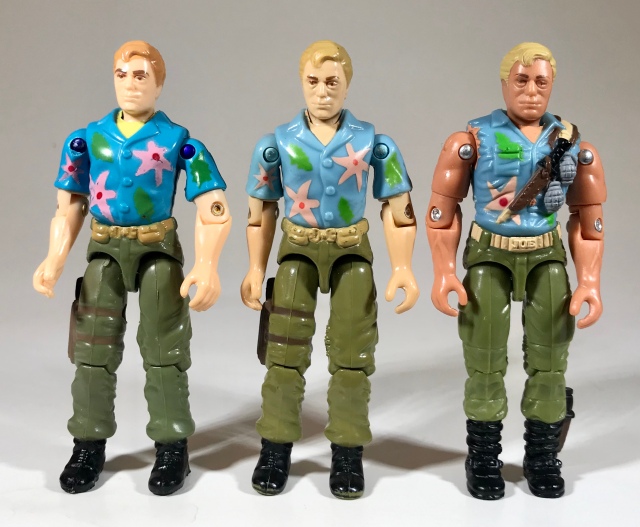 Note that the 2007 Flaming MOTH Chuckles (right) has an entirely different head sculpt than the other two. This could be because Hasbro never got the original Chuckles mold back from Funskool after the Russian figure was released.

If I missed anything, please feel free to let me know either via social media or using this website’s contact form.