According to a source in a former Soviet country (who has also translated the card backs), the entire Russian run of Funskool GI Joe figures was released in 1998. The company who assisted in this release, Two Beetles (see their logo on the card back below), likely had a connection at Funskool. Aside from Chuckles, all Russian Funskool figures are nearly identical to their Indian counterparts– only the card backs were changed. Though these were reportedly only produced for a year, they can still be found in former USSR territories. As a fun side note, “beetle” is Russian slang for “swindler.”

According to the best information I have, the Russian Funskool GI Joe Barbecue figure was released sometime around 1998. People who live in former Soviet territories report still seeing these figures in stores from time to time.

Russian Funskool Barbecue, like its Indian counterpart, was produced entirely from Hasbro’s 1985 Barbecue mold. The figure also includes the same accessories. The coloring on the figure is remarkable different, however, and is a prime example of some of the fun, whimsical releases Funskool did over the years.

The figure’s accessories are also differently colored and, in one case, made from different materials. We will cover that shortly.

Like all Funskool figures, this Russian version of Barbecue is made of slightly lower quality plastic than the original Hasbro release. 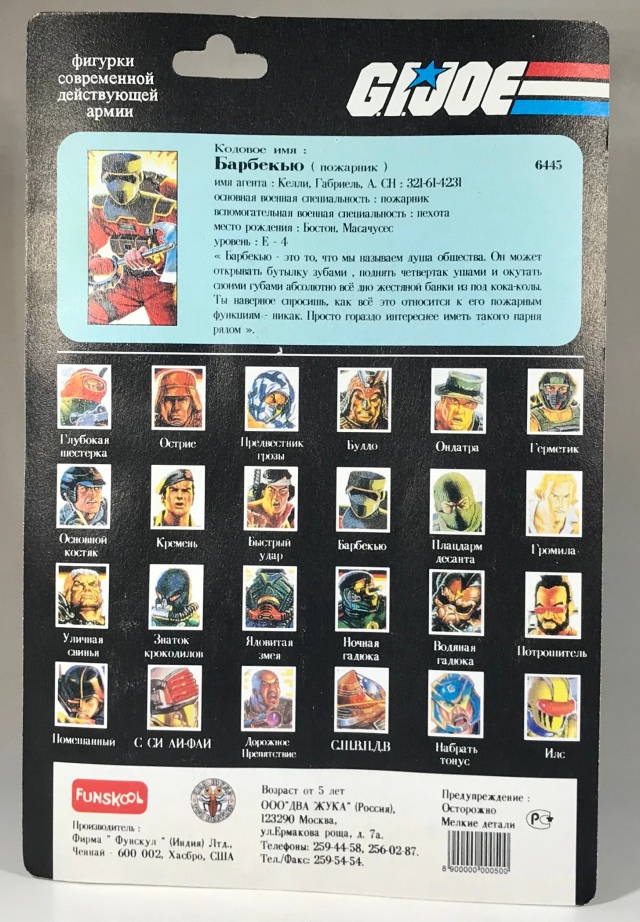 Funskool packaging is also thinner and flimsier than Hasbro packaging.

Though there may be some production variants of Barbecue, note that the only real difference between the Russian and Indian versions is the back of the figure’s card.

Russian Funskool GI Joe Barbecue is cast in deep red plastic with blue, black, and pale yellow (or flesh tone, depending on who you ask) paint applications. The figure has fewer paint apps than its Hasbro counterpart, which we will cover more in the comparison section.

The paint is noticeably sloppy on this particular figure. I am not sure if this is true of most Russian Funskool Barbecues, or if I just got one with worse than usual paint applications.

Sloppy paint apps aside, the figure feels solid and poses well. It has no problems sitting, standing, or moving its various joints.

Regardless of any faults, it is a striking figure that looks drastically different than the Hasbro release. 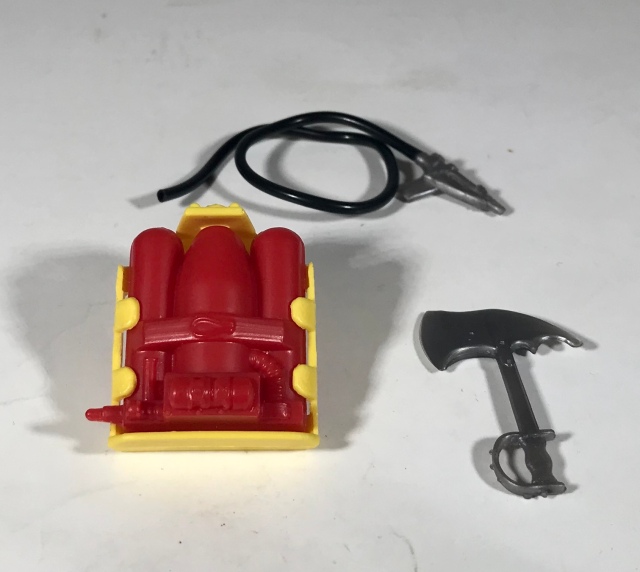 The nozzle, two piece backpack, and accessory hose mostly work just fine with the figure. The hose plugs into both accessories well, the backpack fits snugly, and the figure has no trouble holding the nozzle.

The nozzle cannot, however, plug into the figure’s leg like the Hasbro version. The peg and slot system are there, but the plastic tolerances mean it won’t stay plugged in for more than a few seconds.

In addition, the Funskool axe is made of a much softer, flimsier plastic than the Hasbro axe. The grip is too small and too pliable to fit in the figure’s hand.

I solved this problem with a bit of poster tac planted inside Funskool Barbecue’s right hand. It holds perfectly and was an easy solution. So, it is somewhat frustrating, but it can be overcome with little fuss.

The figure All Geared Up: 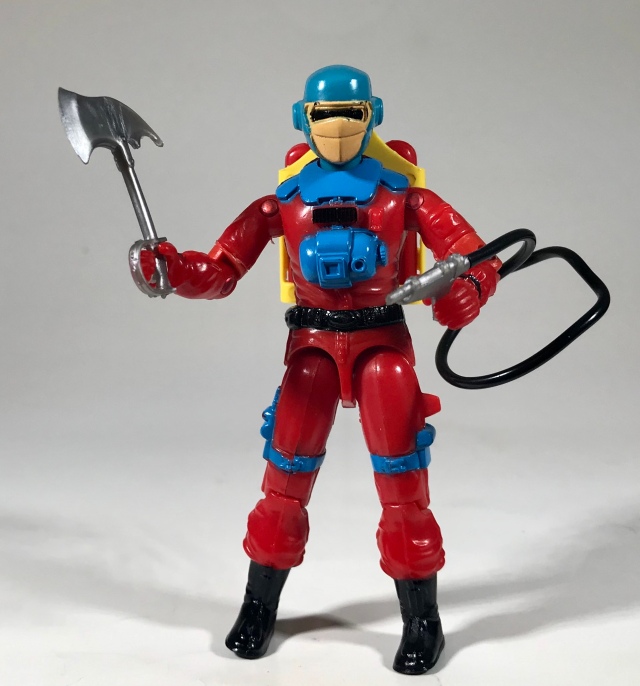 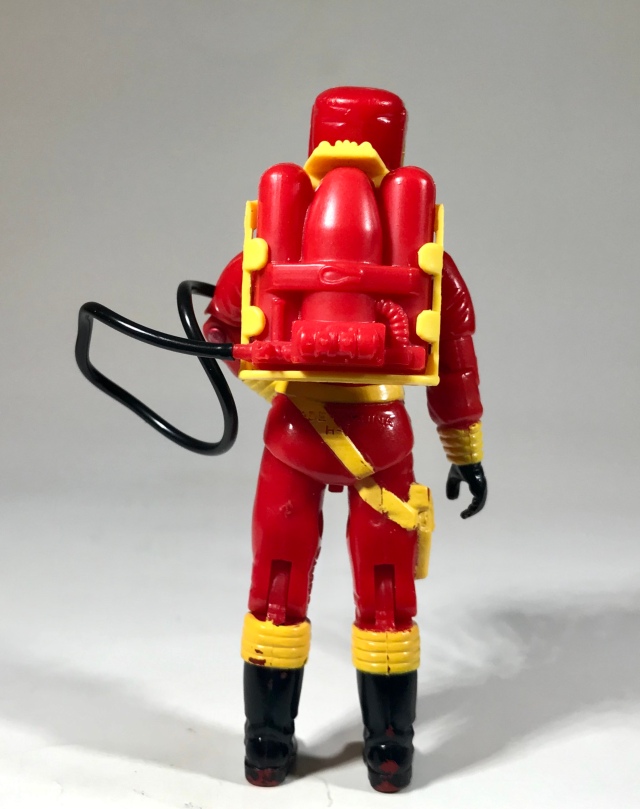 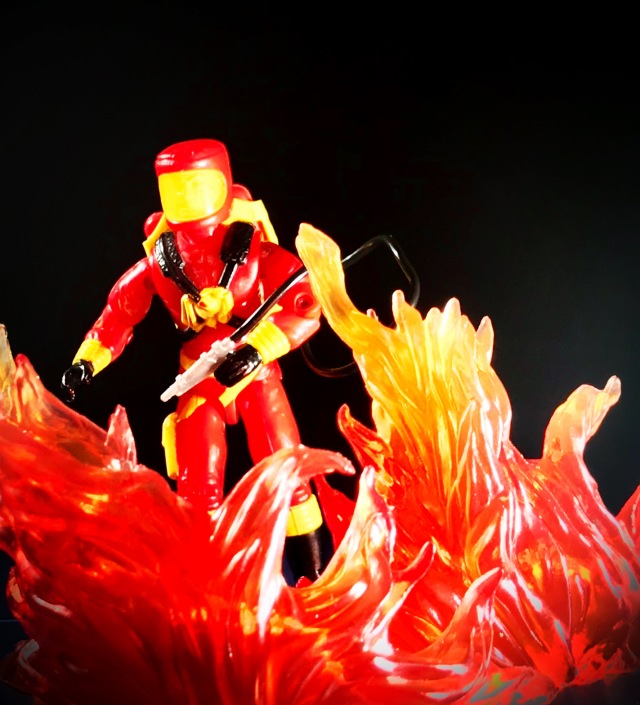 Russian Funskool GI Joe Barbecue has a few more problems than Funskool figures usually do– sloppy paint and accessories made from the wrong materials.

If you can get over those problems, though, it’s a worthy figure for most GI Joe collections.

Most of the Russian figures Two Beetles and Funskool released look similar to their Hasbro counterparts in one way or another. Barbecue is maybe the biggest departure in the entire series, though.

As stated previously, this figure is largely identical to the Indian Funskool Barbecue (though there maybe be one or many paint variations for the figure).

It is not identical to Hasbro’s 1985 Barbecue. 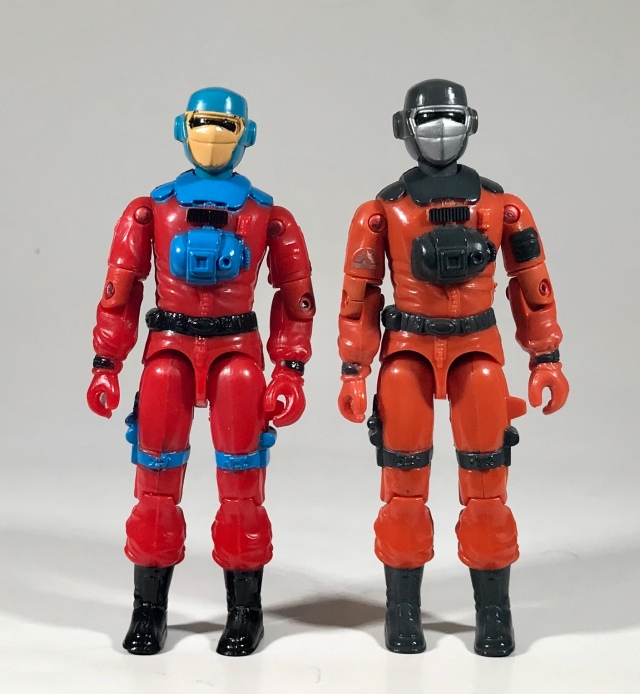 For the most part, Funskool Barbecue replaces the Hasbro figure’s dark grey with blue, but that doesn’t translate across the board– observe the figures’ belts, for instance.

In addition, the Russian Funskool GI Joe Barbecue is missing both the insignia patch on its right arm and the painted-in detail on the left forearm. 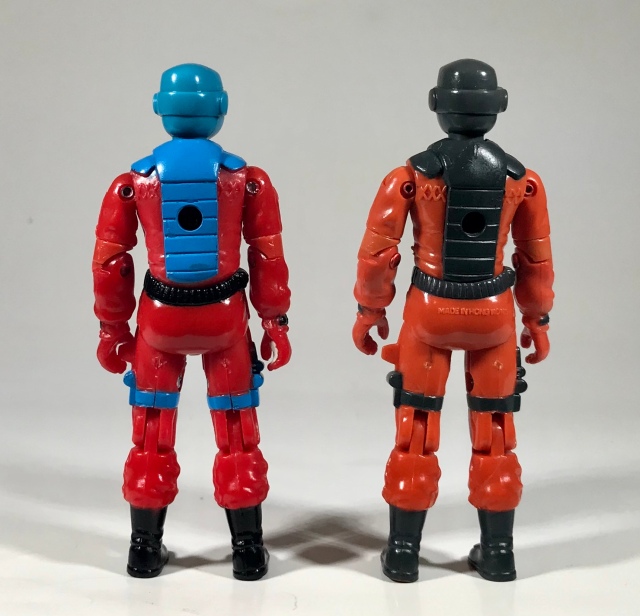 There may be some interesting date or country of origin stamp information, but I didn’t look very hard for it. Sorry.

Hasbro Barbecue’s accessories are cast in plastic that matches the figure– orange and dark grey. Hasbro Barbecue’s axe is cast from rigid plastic (which means the figure can hold it without modification) and features an additional silver paint application for the blade.

Even in poorly photographed eBay lots, it should be easy to tell these accessories apart.

That last photo is just for fun.

Did I miss anything? If so, let me know via social media or vy using this site’s contact page.