Clearly there are many reasons why I am not a professional Toy News Journalist.

But I do like GI Joe, and I know more about it than I know about microbiology or the history of Reggaeton, so I thought I’d serve you up some stale takes about some fresh new product.

If you’d like to see the actual press release from Super7, I suggest checking out TheFwoosh.com or Brian Flynn’s announcement video, embedded below.

I guess I am basically one of those YouTubers who makes millions of dollars from reacting to Star Wars cartoon trailers now. There’s no going back. Let’s move forward and let the Nord VPN sponsorship dollars roll in.

Serious Toy Collectors tend to fall into one or two camps when it comes to Super7– they either think Super7 products are the best thing ever or are overpriced garbage.

I don’t fall into either camp.

I think Super7 succeeds at what they do and I’ve bought quite a few things from them. Most products they release fall squarely into the “not for me, personally” category, though.

For instance, their TMNT Ultimates figures look beyond incredible. I prefer the classic toy look for TMNT stuff, and Super7 is releasing pitch-perfect versions of those classic toys with a ton of accessories, alternate heads, and great articulation. They’re stellar. But, since I don’t collect 7″ figures, I didn’t buy them. I do appreciate the thought and care that goes into them, however.

Similarly, a lot of ReAction figures just aren’t “for me.” I don’t mind action figures with 5 points of articulation, but I have no particular attachment to that simple “retro” style or a lot of the properties they cover.

Unless they make ReAction figures of a property I just can’t refuse. Like Jem, for instance. 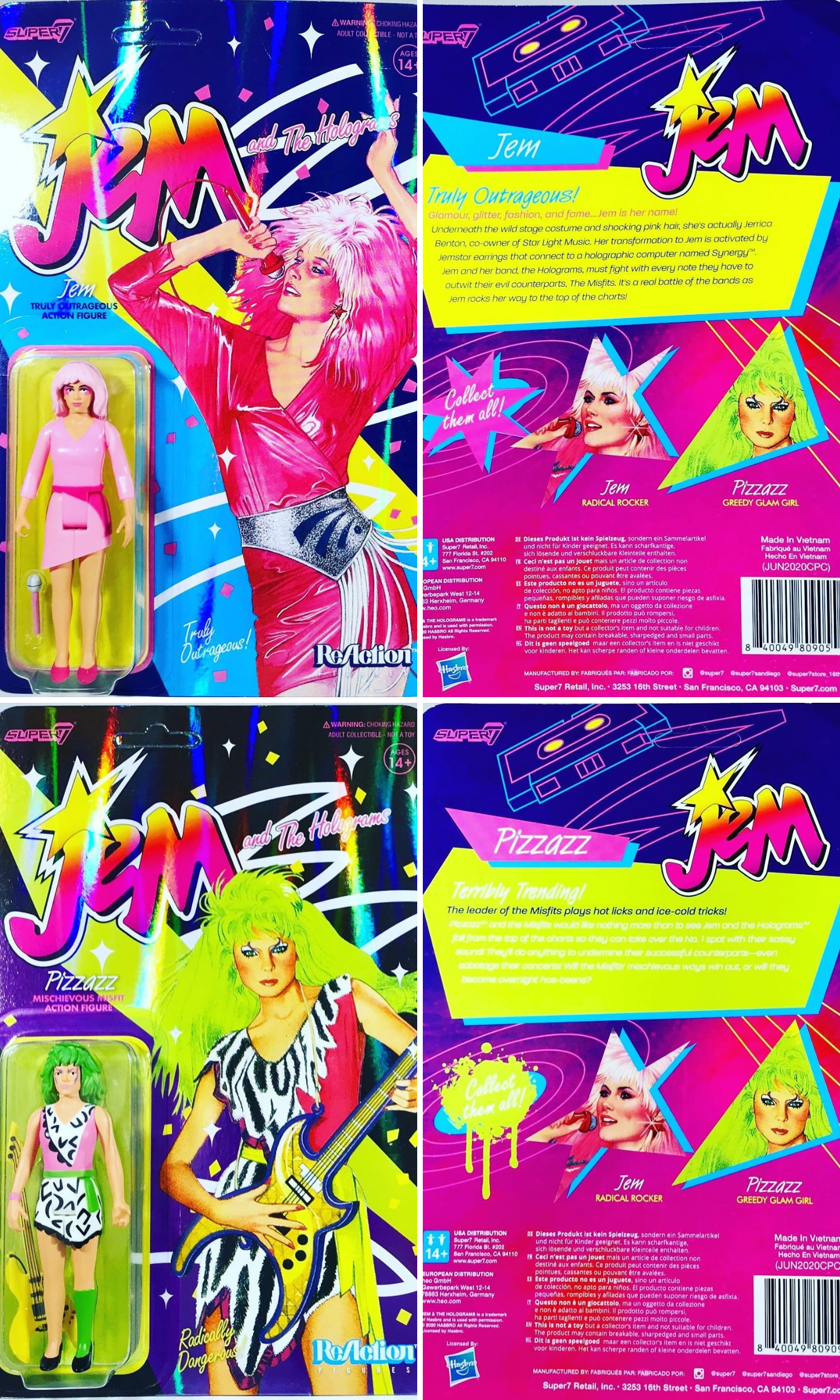 How else would I have ever obtained Jem and Pizzazz figures in my beloved 3.75″ scale? The packaging on them was beautiful (which Super7 always excels at) and the figures were better than I expected, too.

Now I really can have the Holograms and The Misfits hanging out with GI Joe.

Similarly, I loved their Robotech ReAction line. The figures scale very well with the old Playmates Exosquad Destroid re-releases, which was a dream come true.

It’s an old photo and this is a judgment-free zone, okay

I’m also a fan of their “original” properties, such as The Worst, which fits in well with Action Force stuff, if not with GI Joe itself.

And what can I say about Maria from Metropolis? Their Maria figure is perfect, and I tend to sneak it into photos whenever I can.

The shiny one is also a treasure. 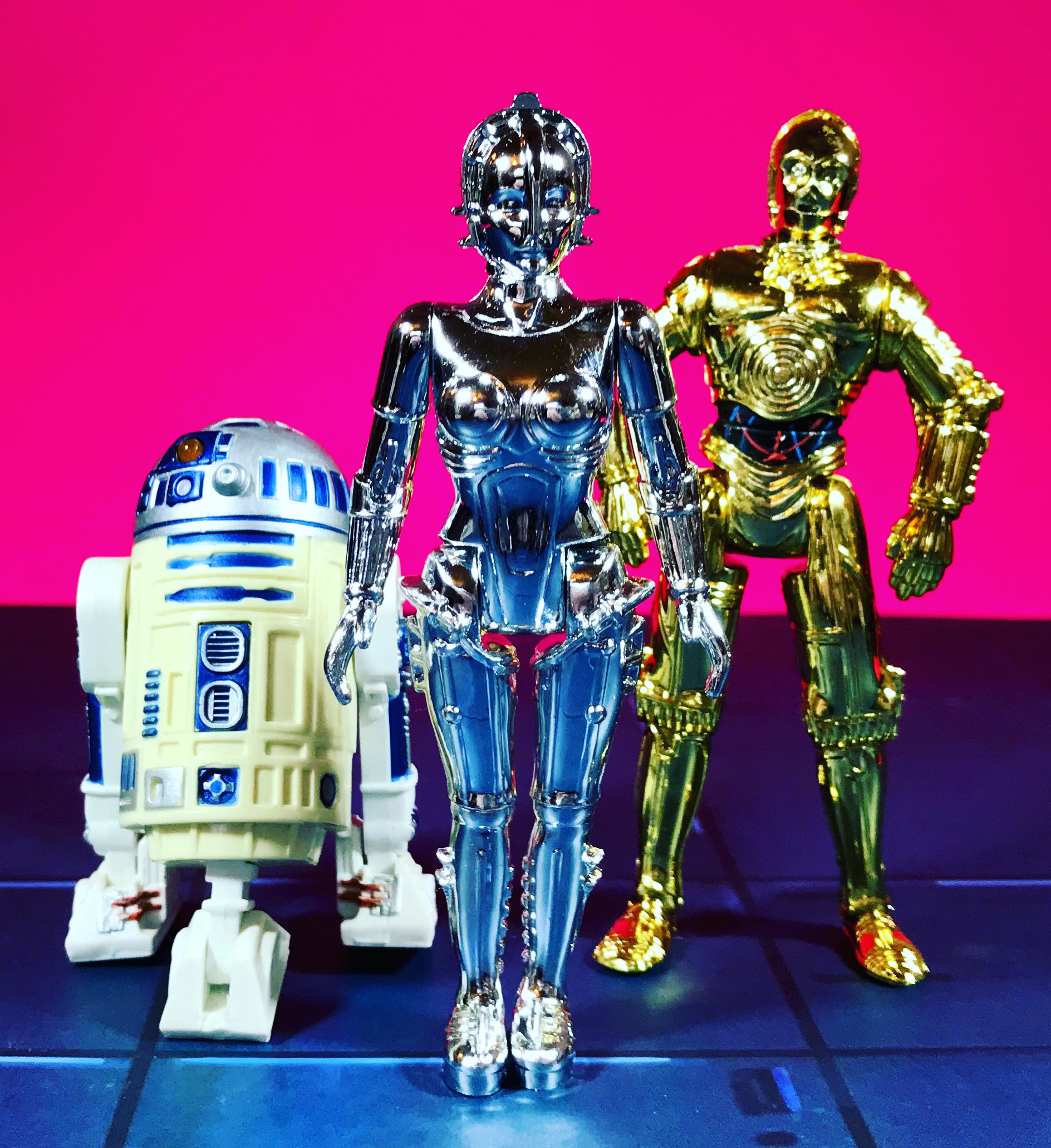 I’ve also purchased glassware from Super7, and it’s great. Their vintage-style MOTU figures are excellent, as well, with Shadow Weaver and He-Ro being standouts.

So, basically most of what Super7 does is not on my radar because it’s “not for me,” but I appreciate what they do. They seem to genuinely care about making cool toys.

But GI Joe usually is “for me,” so I wanted to put a little bit of thought into these upcoming releases. I’ve been skipping Classified since I don’t collect the 6″ scale, and the “retro” figures don’t do much for me either– I already have enough Modern Era Joe figures.

So, what about Super7’s newly announced GI Joe offerings?

I’m not going to say much about the GI Joe Ultimates figures Super7 revealed, as I feel like they speak for themselves. They are high quality, cartoon-based toys with tons of parts and accessories done in a 7″ scale. That’s not something anyone else is doing. They all look very good, especially the BAT. I can see some Classified collectors fudging the BAT into their collections pretty easily. These are also more source material accurate and less “reimagined” than the Classified series, which will please a lot of people.

The ReAction figures are a bit trickier, though. Taken at face value, these are GI Joe figures in the classic GI Joe scale, but with greatly reduced articulation and fewer accessories.

I’ll discuss each figure a little bit, but overall the Cobra Troopers and Greenshirts seem the most interesting. They could work as background filler in photos and on shelves. They could also fit in nicely with Action Force collections.

But they’re $20 each. For $20, I could get a Black Major Trooper, a Night Watch Trooper, or a Comic Pack Trooper, all of which are fine toys. So it’s a bit of a hard sell.

There are figures I’d be happy to buy in the ReAction style that I don’t think Hasbro would ever do, such as Saxophone Snake Eyes and Hector Ramirez. Hell, I’d even buy a Sunbow-style purple and grey Snake Eyes in his version 2 costume, as he appeared in the majority of the cartoon and the feature film.

But these are not that. To be fair, Super7 is just getting started. But let’s see what they have for us and take it figure by figure.

Snake Eyes: Snake Eyes always looks cool in blue and purple, and I like the original commando design a lot. You can basically get this look from a few ARAH-style figures, though. And I’d pick those over the “charmingly retro” 5 POA type toys any time. But I want that Sunbow style laser pistol. I’ve always wanted that exact accessory. I’d probably give it to Shipwreck, who I associate the gun with. Plus, that would solve the “Shipwreck’s flintlock pistol is dumb but I don’t know what else to give him” problem I’ve always had. But that’s still $20 for a laser pistol. The rifle looks good, too, but I have a dozen Snow Job rifles sitting around.

Kwinn: Well, this toy proves that these Super7 figures aren’t just Sunbow-based (even though most of them are). Ever since the rumors of Super7’s GI Joe ReAction line started hitting, Joe fans were excited about the prospect of getting a Kwinn. But they weren’t excited about getting Kwinn in his cold weather garb, because Hasbro already did that with a Comic Pack figure. If this would have been Kwinn in his cute khaki shorts, I think a lot of people would have bought it for their ARAH collections.  The gun looks kinda neat, though.

Scarlett: She has a good head sculpt that I can see intrepid kitbashers and customizers trying to put on a v1 Scarlett figure, or any figure that uses that mold. It’s nice. I don’t think she’s cartoon based, as she has a crossbow rather than a laser rifle. I don’t have much else to say about it, other than there’s not much interest here for me.

Cobra Commander: The vintage ARAH line doesn’t have a figure that looks exactly like CC did in the cartoon, so I can kind of see the appeal here. It looks pretty close to the animation model, at least within the ReAction style. Too bad you won’t be able to get any poses out of it, though. Again, I want the laser pistol.

Destro: Yep, that looks like a Sunbow Destro. I’d argue the 1992 Destro (and its 01 repaint) fills that need a little better, though.

Baroness: This is another interesting one. There’s no o-ring style figure representing Baroness in her sometimes-cartoon look but this figure does a nice job of it. The head sculpt is good and the costume is on point. The gun also seems like a less annoying version of the original Baroness’ weapon. I can see people being into this one, and I might be into it, too, if the price was nicer.

Greenshirts: Greenshirts, aka GI Joe troopers. Hasbro famously did a really bad pack of these in the o-ring style. They all had Downtown’s head. It was a fun time for everyone, and we all realized how much sheer effort Hasbro was putting into the brand at that point. Good times. Having 3 different versions of the trooper is a good idea, so they’re not all clones. These could make good scene fillers or vehicle operators, or just make a nice little display for people who like the style of action figure. A pretty good choice on Super7’s part.

Cobra Troopers: Six different Cobra Troopers?? Holy moly! I actually think these would be great for filling in the ranks in displays and in photos. They’d be nice crewmen for certain vintage vehicles, too. Again, I like that there are some skin tone differences and they’re not all clones. That’s a thoughtful touch. The Sunbow laser rifle and pistols are also welcome.

My buddy Drac took this screengrab. Thanks, Drac!

As it turns out, Super7 sculpted the web gear two different ways– and you can only tell from the back! That shows that they really did put some thought into these. Even though these toys are not my exact cup of tea, I do think Super7 is taking the whole thing seriously. If it was some sort of cynical cash grab, I don’t think the team at Super7 would be putting that kind of effort into these admittedly simple toys.

If these were a bit more reasonably priced, I’d grab at least two of them. I think the sculpts are quite sharp, too.

My friend RTG has a very different (but still reasonable) take on these over at Attica Gazette, if you want to read it.

If I seem a little wishy-washy on these, it’s because I am. A lot of my friends in our so-called GI Joe community are really excited about these toys– and they have every right to be!

ReAction figures are not my preferred style of toy, and they really don’t compare to ARAH-style GI Joe figures. But these do kind of fit in with classic Joes, so I’m a bit torn. And I definitely want some of the accessories.

I think these are pretty well done and thoughtful toys, but they don’t necessarily put the huckleberry jam on my hot buttered toast. We’ll see what I end up buying.

As always, my philosophy on these things is simple– if you don’t like it, don’t buy it.