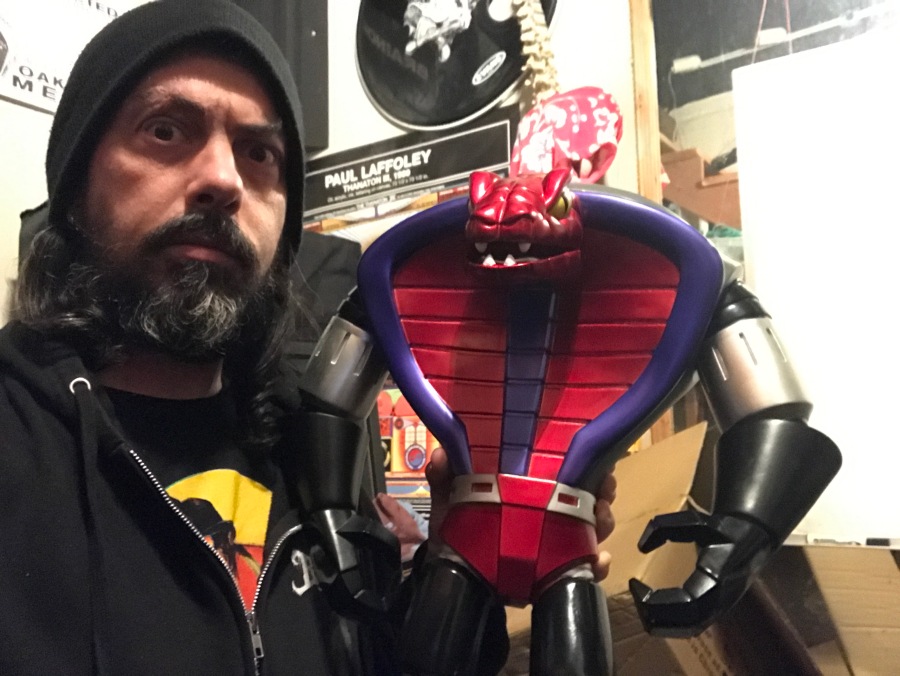 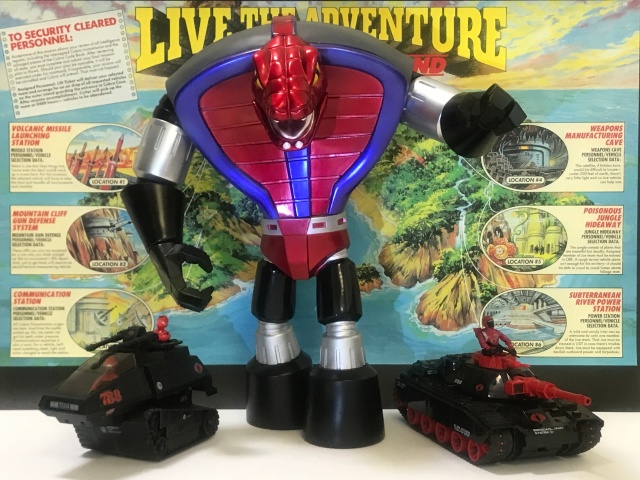 (Editor’s Note: Today’s post comes from Ross Sewage. You may know Ross from his toy photos on Instagram and Twitter. You may also know him from his blog, where he shares in-depth guides on repairing and customizing electronics and music gear. Or, it’s possible that you know him as a member of Exhumed and Impaled. Ross’ GI Joe and Transformers photos are always a delight, and I’m excited he sent me a review of this big, lumbering Cobra robot. Enjoy!)

Review and Photos by Ross Sewage

I am a fan of many toy lines, but I am a G.I. Joe collector at heart. Still, I follow other toy lines and I have always been jealous of Transformers collectors. They have a vast richness of third party productions. These are toys not produced by Hasbro, the owners of the Transformers intellectual property, but other designers and factories not associated with Hasbro.

Hardcore G.I. Joe fans will, of course, point out the work of Black Major and Red Laser. Both of these mysterious individuals have produced some fun figures over the years which are largely redecorations of old Hasbro o-ring figure designs. There are also a lot of customizers doing cool work and some 3D printers churning out small bits and bobs to flesh out a collector’s G.I. Joe world. Transformer fans, though, get entirely new, factory-manufactured designs with original, complicated transformations. They’re produced with an (more-than-meets-the) eye towards recreating elements from the cartoons and comic books that Hasbro either missed the mark on, or they’re just bigger and more bad ass than what Hasbro is willing to do.

I can think of but one G.I. Joe third party toy that really attempts the kind of grandiose and ambitious design that Transformers fans get on the regular. I’m talking about the Cobra Sentinel Mk. II, also known as (for legal reasons) the Steel Kaiju. 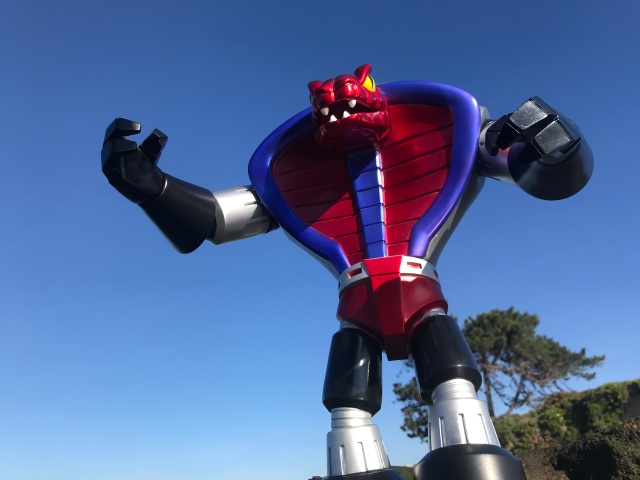 Fans of the G.I. Joe cartoon will remember the Cobra Sentinel Mk. II from the episode “Palace of Doom,” part 3 of the Revenge of Cobra mini-series. It doesn’t get much screen time, but what it lacked in longevity, it more than made up for in impact. The robot was literally a walking, roaring, fire-breathing Cobra sigil. Truly, it’s one of Sunbow Animation’s coolest original designs that Hasbro wouldn’t touch with a ten-foot pole. It would take 35 years for someone to finally bring it to life. There was an attempt by another third party group to create a Cobra Sentinel Mk. II. Unfortunately, they went the Kickstarter route and tied the name of G.I. Joe and Cobra to their efforts. The Hasbro legal department eventually caught up to them and shut it all down. Fortunately, though, the attempt didn’t look all that spectacular and the scale was a bit dubious. 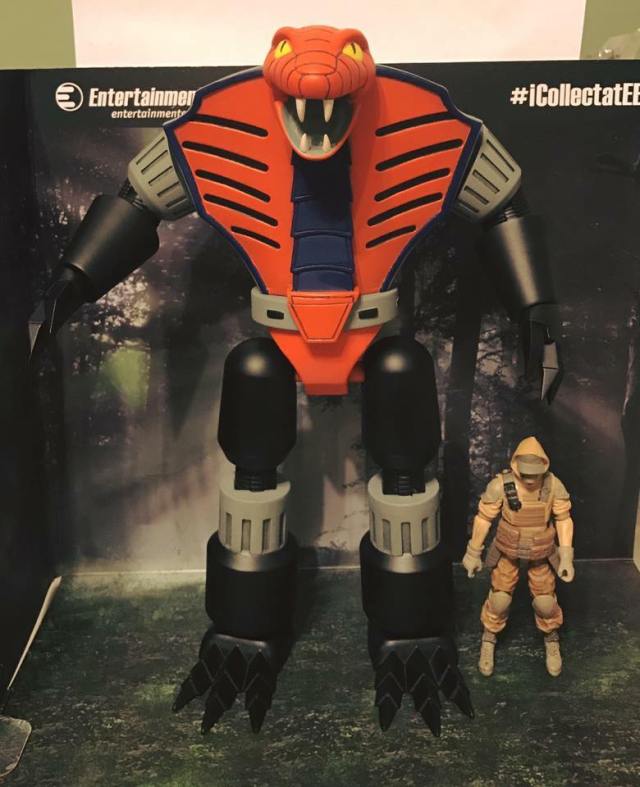 The Steel Kaiju was first revealed in mid-2019 on Joe forums and released, extremely surreptitiously, later that year through eBay auctions and Facebook posts. Eventually, a few webstores picked some up to sell. Who made it? No one knows… but it was designed by one Solomon Witt, known in G.I. Joe circles as an excellent customizer and producer of oddball accessories like glow-in-the-dark B.A.T. heads and other cool oddities. That’s who I purchased my Steel Kaiju from during a holiday sale, because wow, these things are pricey. They usually run about $450-500 online. I mean, I couldn’t afford to NOT to buy it at a discount! 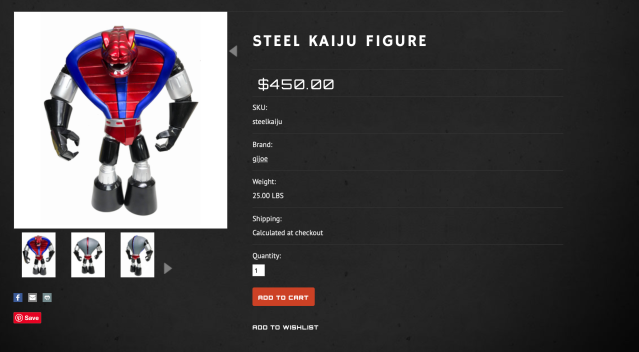 Witt was quick to point out that he had no idea who manufactured his design and that he was not in contact with the manufacturer. He just happened to have stock of it to sell. That’s his story, and for legal purposes, I will assume it to be fact. I sent him the money via PayPal and prayed that I would not be ripped off. Shortly thereafter, a very, very large box arrived. 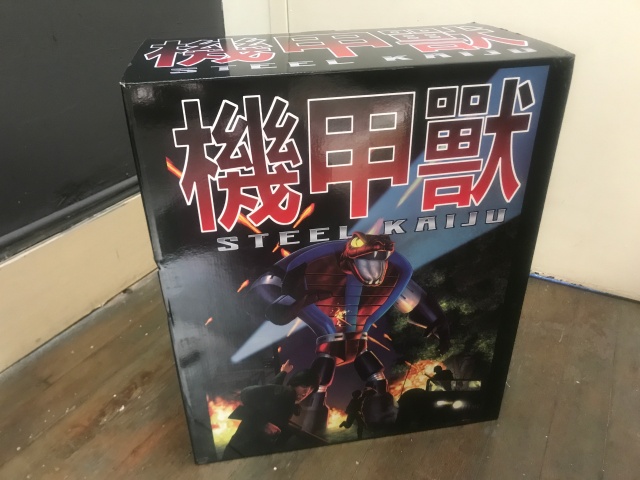 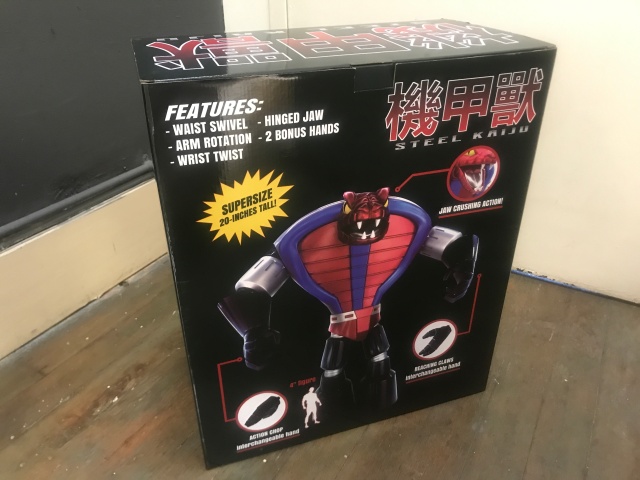 The box itself is pretty dope. There’s nice artwork on the front. The back has a slightly low res photo of the toy itself. I’m not a box type, so I tore into the thing. The Steel Kaiju was well protected with a slip cover and in fitted styrofoam. It came with another pair of kung-fu chop hands that can replace the gripping hands, and that’s it. No manufacturing notice, no catalog, no nothing… the origination of this thing is completely mysterious. 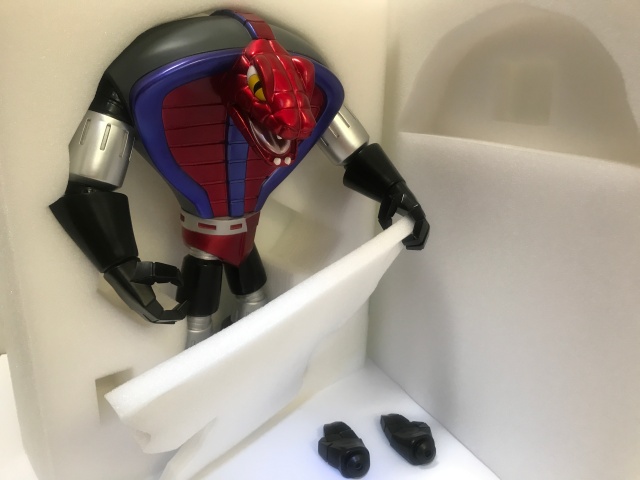 The Steel Kaiju itself is absolutely stunning to look at. It’s scaled for 1:18 figures as close to the cartoon as Witt could estimate. It measures about 20 inches tall and was the tallest toy I’ve ever owned in 45 years (for about five months until my Haslab Unicron arrived). It features metallic red, blue, and steel colored paint applications, along with grey, gloss black, gloss white, and gloss yellow. Just standing it up for the first time was impressive as hell. 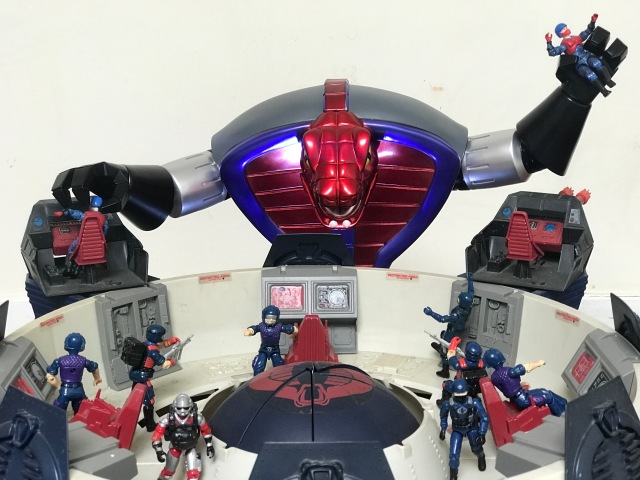 So how does the Steel Kaiju figure into a G.I. Joe collection? Well, it’s so damn tall, it towers over the Cobra Terror Drome. It towers over almost any Joe diorama or set up. It  features only four points of articulation at the shoulders, waist, and jaw, so it doesn’t pose very dynamically. Because of the way the large shoulder span towers over the waist, it is precariously balanced. There’s nothing one can do to shift the legs to help; they’re fixed in place. It’s vinyl, so the paint applications are extremely fragile. I found that out when I bumped it’s nose and did some other stupid things with it. 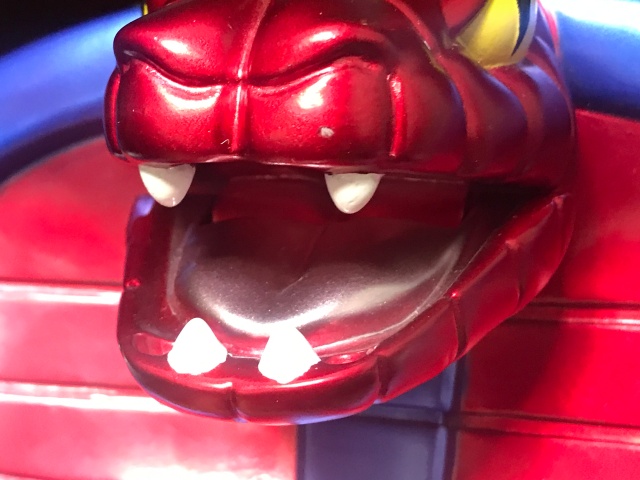 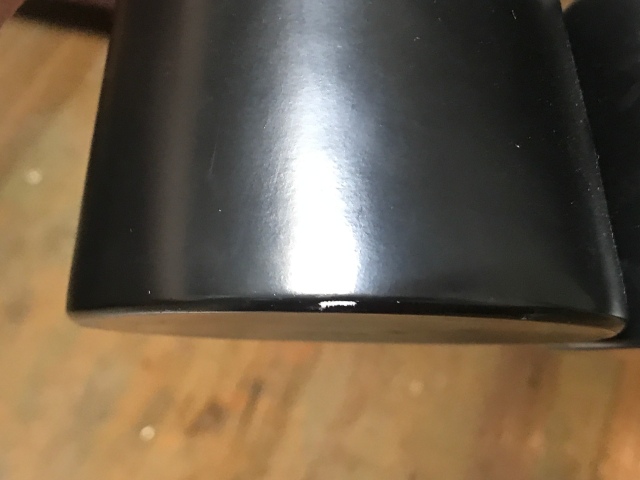 This is not a toy as a child would understand it. This is not something that fits well into Joe play or stories. It is an expensive novelty statue for adults… and I love it. The G.I. Joe cartoon is like Hasbro’s bastard child that they are ashamed of. Star Wars and Marvel Legends fans, for example, get toys of truly obscure characters like Lav Sivrak or Xemnu to flesh out their toy universe. Joe fans just get endless iterations of Snake Eyes. So, something unique like this is quite special, even as not-play-worthy as it is. 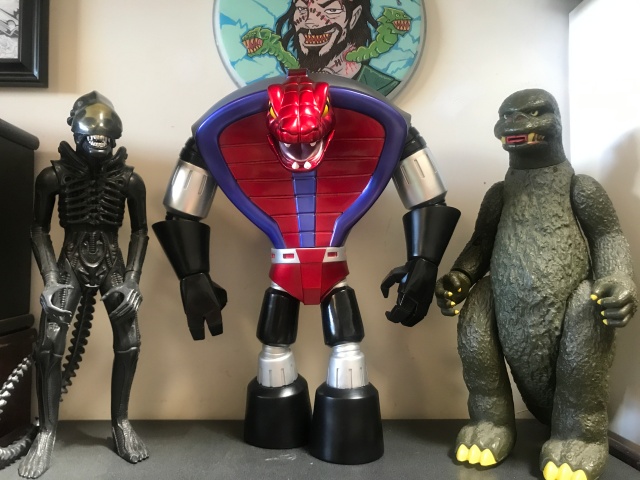 The Steel Kaiju is not a toy per se, but it is a beautiful piece for Joe fans who truly appreciate the audaciousness of the Sunbow cartoon. With only around 500 made, it’s also a rarity to covet. It isn’t easy to get much out of posing the Steel Kaiju, but I did manage to take some fun photos featuring the beast. Here is my little narrative based on the Cobra Sentinel’s brief appearance in “The Palace of Doom.” 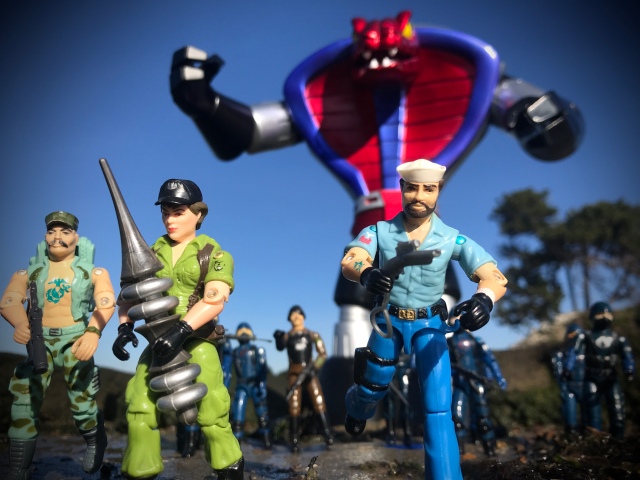 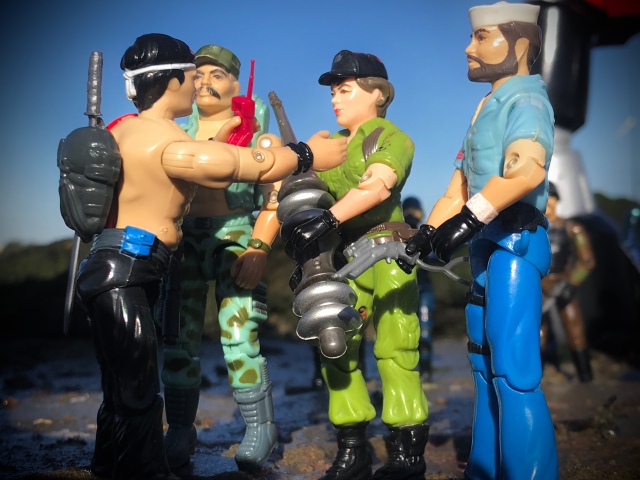 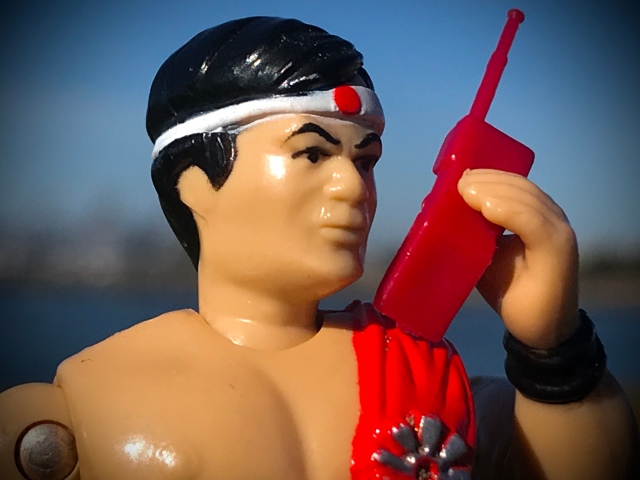 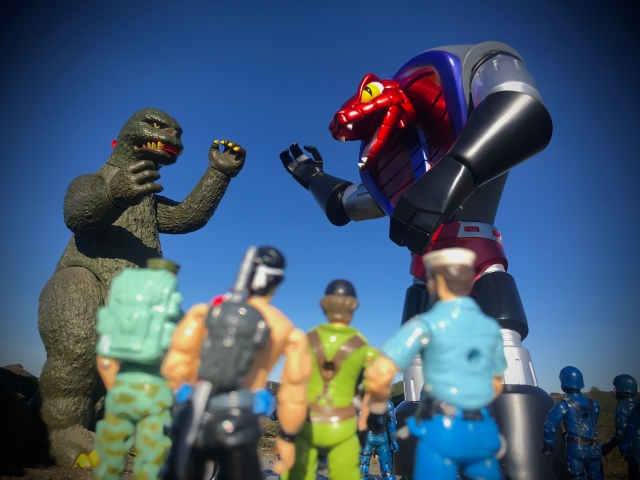 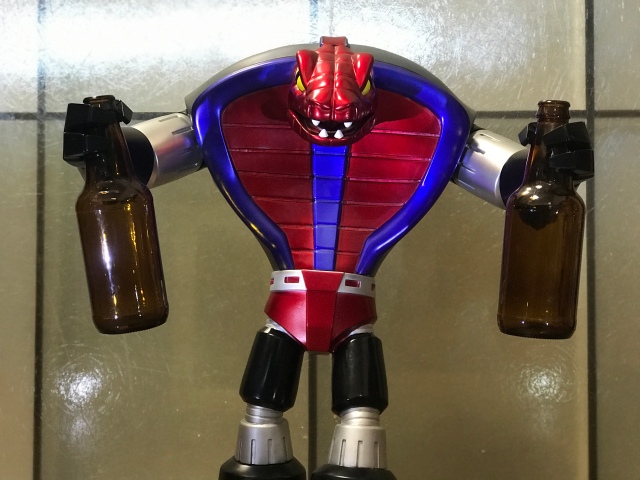 Oh, you thought we were finished with Steel Kaiju? Hah! That was a false ending. A ruse. Do you feel sufficiently tricked?? You don’t have to answer that question, but Ross also created a (hilarious) review and unboxing video, just in case you wanted to see someone open up a big box with a big snake robot inside of it. I know I did!

Huge thanks to Ross! It’s an honor to host a review of such a weird and wonderful toy. I tend to write about some of the stranger GI Joe figures, but this review ups the ante considerably.

Do you have a favorite non-Hasbro piece in your GI Joe collection? Who do your Godzillas fight? Let us know in the comments!

Look what came in the mail. It’s nice to finally have a complete one of these. #exosquad
Machine Wars Mirage from 1997 #transformers #machinewars
Gundam Infinity is good, actually
It’s amazing to me that the trooper is perfect and the officer has both waist and knee problems, much like old comic pack and some factory custom figures. Love all the extra accessories though. #GIJoe
Got these blue wearing dummies in the mail #GIJoe
I just opened the Creatures Collide 4 pack. Overall it’s pretty good and easily worth the $73. You can find more photos and in-depth thoughts over at my twitter account. #transformers #beastwars
Goldbug never let success and fame go to his head. He still hangs out with the same old knuckleheads from the neighborhood. #transformers #throttlebots
Fun Fact: Terrorsaur and Rhinox were my first Beast Wars toys. I ride my bike to the drug store by my mom’s house one summer Saturday and was elated to see new Transformers on the shelves. So that’s where a month of allowance went. #transformers #beastwars
Have you heard @toysandtomfoolery’s lesser known Jimmy Buffett tribute album?
Thanks to a dear Twitter friend, I have a Wun-Dar! This is my first Mattel Creations figure. I also loved the old MOTUC version and like the character concept, so I’m very excited. More pics and thoughts in the next lil while. #MOTU
lil bb Megatron: G2 Edition. Also loose joints, parts that won’t tab together, and overall bad QC edition. Beautiful colors, disappointing toy. #transformers #transformersg2 #generation2
Recently finished watching the entirety of ENT for the first time so I had to get this lil guy. #startrek
Join 77 other followers