(Editor’s Note: Today’s post comes from my friend Colin, the mastermind behind Colin’s Joes. It’s my favorite kind of toy review blog– the kind where the author waxes poetic about what a toy means to them and also gives a factual, in-depth review. If you like ARAH-era GI Joe and aren’t regularly reading Colin’s website, I highly encourage you to do so, because he makes every single post something special.)

Review and Photos by Colin H.

The “Neon 90s” weren’t so neon for me. I had a Sunice ski jacket that I got in grade 8 that was so bright it would burn your retina if you weren’t wearing sunglasses. But that was when neon died for me, sometime around 1992.

The decade started with moving from a small town (Fort Smith, NWT) to a small city (Yellowknife, NWT), and progressed through learning to drive, my first girlfriend, my first drink, graduating high school, working at a music store, and dropping out of university. Twice. I spent most of the time cruising around my hometown in a Ford Tempo, listening to Dre, the Wu, Big and Pac. And I remember going to the bars in Edmonton on the night that Y2K was supposed to disable the world’s computer networks, and in the relief of having survived disaster, I may have kissed three different girls at midnight.

I started the 90s hooked on X-Men comics, and I ended the 90s hooked on X-Men comics. But in between it all, I sold off my childhood GI Joes, then lived without toys for a few years, before coming back at 17 as a part time collector, grabbing late-run 90s figures at the local Wal-Mart, ordering classic 80s Joes through mailaway offers from Hasbro Canada, and lucking into a few early ARAH MOCs.

Truth be told, I should hate Dustin. After all, this blog influenced why I’m interested in 1990s Joes now, why I’ve acquired foreign figures, why I have more than a few Corps figures in my collection… Life might be a lot better if I had never found the Dragon Fortress. Maybe I’d be rich, or maybe I’d finally publish that novel I’ve been working on since 2008.

Most likely, the novel would still be in its current and infinite editing stage, and my disposable income might have instead been spent on discounted figures from the Star Wars prequel trilogy. You can never have too many Darth Mauls and Jar Jars, am I right?

(I said, banking on a market correction.)

I can’t hold it against Dustin that I have a rubber arm, and that I’m always looking for toys to give additional meaning to my life. 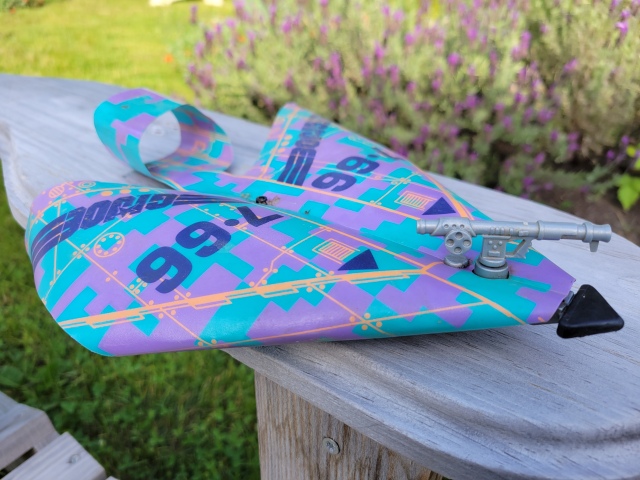 Anyway, I found the Dragon Fortress website four years ago. And as much as I lament how his reviews have impacted my savings account, I also appreciate that his posts have helped create connections between me and toys that I might not otherwise care about. Yet, the thing I appreciate most about Dustin is that he seems to be a genuinely nice guy.

I remember a few years ago, when I was simply following @dragonfortress on Twitter and not interacting with him in anyway. One of his Twitter posts talked about an old man that lived next door, how he would sometimes give this guy money so he could get a cab or a bus to the grocery store, how Dustin had felt shock and sadness after that man had passed suddenly.

I had a neighbour like that, an old man who asked for my help to move a hot water tank into his basement, a veteran whose truck broke down on Remembrance Day, wearing his dress uniform on his way to attend the service, who passed away rather suddenly a few years ago. And I remember thinking how real Dustin’s post was, how unfiltered and honest his reaction was, how I didn’t expect to see that type of post on social media. So I felt a kinship long before we started to become friends on Twitter.

The kids might call it “Stanning”, but whatever, it led us here.

Honestly, that’s why I wanted to write a post when I heard he was going through a rough time. I know my words won’t help much, but maybe they will give him a moment away from it all. And sometimes you just need a second to catch your breath.

I’ve been building my 1989-94 Joe collection for the past three years, after downsizing a bunch of Joes I wasn’t feeling a connection with in 2016 & 2017, then feeling sellers’ remorse, a short time later.

There were easy choices of who to get rid of, and easy choices of who to go after, once I started collecting them again a year later. And there were some obvious choices of who I regretted parting with most, either through latent, retroactive appreciation or through recognition that I had sold certain figures for significantly less than they are worth now, knowing that trying to get a replacement at a reasonable price will be frustrating.

When it comes to Cloudburst, I’m not sure any of those choices would have been difficult. Had I owned him five years ago, he would have been on the first bus leaving Joeville. The orangish yellow arms and white pants would have been everything needed to toss him aside, and the pastel pink pads on the sides of his thighs would have just been frosting on the cake.

Nor was he one of the first figures I tried to find after I started collecting 90s Joes in 2018. In fact, he was one of the last figures I acquired from the 1991 series, just eight months ago, with only a few of the Eco-Warriors and Super Sonic Fighters outlasting him outside of my collection. His hard-to-find status, with impossible to find accessories, and premium price tag were major deterrents from hunting him down. Couple those with a seemingly unattractive visage, and I put him at the bottom of my want list.

Had I owned him, though, he might have been one of the figures I regretted selling off because, in-hand, he’s grown on me. Orangish yellow, black and white are complimentary to each other. I could do without the pink, but the blue visor draws your eyes away from the frosting stains on the side of his pants.

(Yes, I know my pictures make the visor look green.)

The Cloudburst mould is extremely well done, with wrinkled leggings, textured straps on his thighs, back pockets, well-equipped harness, collared shirt, chin strap and stoic disposition. His arms are comically disproportionate – did he spend everyday in the gym, doing bicep curls only? – and mismatched, since the texture on his arms doesn’t align with the shirt on his chest. His arms are well-designed, they’re just not meant for this figure. Uniform black paint on his arms, with proportionate dimensions, and sheen, texture and faux wrinkling to match the rest of his shirt would have made a huge difference. But when you cover his arms and look at the rest of his body, you have the core of a solid figure.

If I was ever customizing him, I might steal Mace’s arms. In addition to black, the two figures share Cloudburst’s orangish yellow, and it’s likely that the Air Commando’s missed potential inspired the colour choices for the later, DEF figure.

In addition to the super cool blue visor, Cloudburst also came with a rifle. This is not up to the usual Hasbro quality, however, as the handle seems too short, the clip seems too narrow, and the barrel seems too bulky. And it’s pink. The less said about it, the better. Though this is Dragon Fortress, so maybe I should lie and say I love the 1990s colour choices…?

The other thing of interest with Cloudburst is the glider he was packaged with.

Since I’m so old, I remember Hasbro’s first kick at producing gliders kids could throw. Not pretty! This seems a lot sturdier. Although mine is worn and weathered, I’ll take it out for a toss and let you know how it fares. Why the hell not…!

The original Falcon and Viper gliders were cheap and flimsy. This feels cheap but not flimsy, and that’s a huge difference. 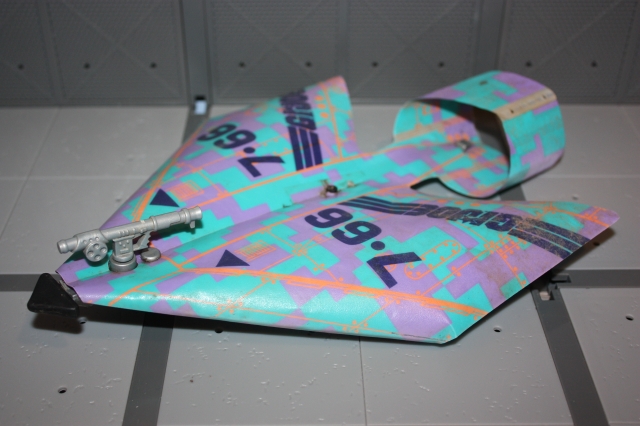 As a sales tactic, marketing gliders on the card with the figures is gimmicky. The bulk of GI Joe vehicles and playsets were hard plastic, and this thing is soft plastic. And the colours don’t mesh with the figure, apart from the orangish yellow.

There were various Air Commando gliders released in 1991 and 1992, all the same style, but you really only need one. Maybe two, if you wanted one for GI Joe and one for Cobra. But you don’t need scores of them, so most kids would have picked the figure or glider they liked best and left the rest on store pegs. It’s similar to the Sky Patrol parachutes, in that having a bunch of figures packaged with shoddy, duplicate accessories does not give enough incentive to get every figure that was released within a subset.

My target, as a child, was always getting as many carded figures as possible. But had I been eight years old when these were produced, I would have only bought just one.

In summary: Cloudburst has a few obvious flaws (pink pads and weapon, weirdly textured yellow arms) but generally he is well-crafted and the glider – if it works! – is fun enough that he would be worth grabbing, both back in the neon 90s, as a child looking for a new Joe toy to enjoy, and now, at the right price, as an adult looking to add another Joe figure to your collection.

As an additional note, I didn’t know that Mr. Dragon Fortress didn’t own Cloudburst when I picked this figure to profile. Apparently, it’s his last 1991 figure to acquire, so I think it’s a good fit that I did. But I look forward to Dustin’s take, too, when he acquires one.

And, as a last note, the test flight did not go as planned. Yikes. The glider fared no better than a poorly crafted paper plane with a led tip. I can only hope that’s the impact of age and previous playwear.

Thanks so much to Colin! If you’re always searching for more GI Joe content, make sure his website is in your rotation. It’s great stuff. You can always find a link to it on my sidebar, too.

I loved this review and I probably won’t ever feel the need to write my own. This one’s permanent, Colin. And, above all else, thanks so much for the kind words.

Sidenote: I actually did acquire a 91 Cloudburst! He was the last figure from 1991 I needed, and I finally found a “deal” on eBay at some point. I still paid too much, but at least he came with his visor, weapon, and a trading card. I think the seller threw in some unrelated accessories to sweeten the deal, too.

I think this is the only photo of Cloudburst I ever took. Oops!

What do you think of the Air Commandos? Did you find the gliders fun? Do you enjoy throwing your toys into the wind? Let us know in the comments!