No one knows where Cobra’s interrogator came from, and no one is sure why he picked the codename INTERROGATOR. In an organization that houses agents with creative names like Firefly, Big Boa, and Dr. Mindbender, no one is certain why Interrogator half assed the whole codename thing so much. What Cobra’s operatives do know about Interrogator, however, is that he is Cobra’s foremost expert on information extraction, torture, and gluing pincer claws onto perfectly good assault rifles. It’s said that Interrogator’s helmet houses sophisticated light equipment, and that his voice modulator can seduce information from the most seasoned soldiers with his patented ASMR techniques. Whether he’s waterboarding a Land Adventurer or threatening an Air Commando’s family, one thing is for certain– Interrogator lives up to his uninspired codename!

From the Files of The Baroness: “You may think Interrogator is all about torture, but if you talk to him for more than five minutes you’ll know helicopters are his real passion. He just won’t shut up about them. But you’d think a man who dresses like an Eastern European dictator and who eats lobster thermidor every night would have better taste. Have you seen that battle copter he flies around? Hideous. And the troopers around Cobra Island have a theory: all that high tech light and sound equipment in his helmet is only there so he can listen to “acid house” and “the Madchester sound” at full blast from his gyroscope-stabilized Sony Discman. Most of our enlisted men agree that they’d rather endure the power drill or the hedge clippers than hear Interrogator talk about either his love of helicopters or his record collection.”

The Interrogator of My Youth 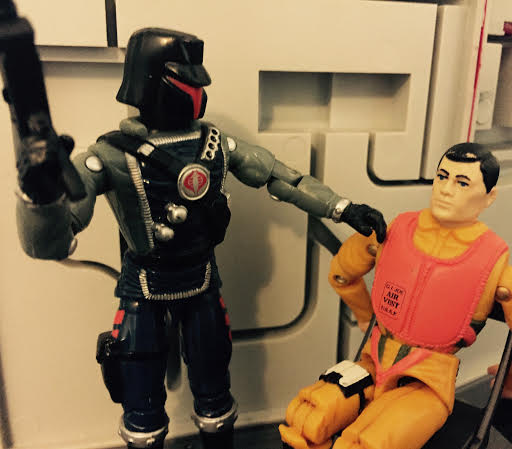 When I turned 9 or so, I met one of the neighbor kids across the street. For about five years, he was one of my best friends. His mother was a nurse and his father was an engineer, so they were fairly well off in our small, low-cost-of-living town in the Intermountain West.

That meant he had almost every GI Joe toy made from 1991 to 1993, with plenty of 94s, 90s, and 89s thrown in for good measure. He also had plenty of Transformers, Kenner Aliens, and his older brother’s giant vintage Star Wars collection. Seriously, he had almost everything. Which means he had the 1991 Cobra Interrogator.

I never had  Interrogator, but I did have Major Altitude, aka the worst Battle Copter pilot. My friend, on the other hand, had Heli-Viper, Ace, and Interrogator. And we both loved Interrogator. We were always baffled by his name, and I remember my friend pronouncing it “Interr-aww-gahtor” because we both agreed no one would just call themselves “Interrogator.”

As much as we both loved Interrogator, we both hated Battle Copters. Beyond launching them once or twice in the backyard and getting them stuck in a tree, or flying them over a neighbor’s fence, they were never much fun. We were lucky we never broke any windows with them.

I mean, think about it– unlike the cool versions in the first GI Joe NES game, real world Battle Copters had no weapons. They had no landing gear. I mean, how could you even land one without breaking your legs? (shout out to slipstream80)

These things were a piss poor substitute for my mail away offer FANG helicopter, his Cobra jetpack, and the Skyhawks and Trouble Bubbles we saw in the cartoon. They never got any play at all.

But my friend would always choose Interrogator when we played, and he always did a Darth Vader voice for him. He could break any GI Joe operative, and he provided a really cool story element for our GI Joe adventures.

That’s why I’ve always had a soft spot for Interrogator. The Battle Copter sucks, but the figure is amazing. And my friend did a really good Darth Vader voice.

The 1991 Cobra Interrogator was packaged with the Cobra Battle Copter, which obviously cost more than a normal figure. And, as far as vehicles went, it wasn’t that great. Basically, it was a little one-person, landing gear-free, weapon-free helicopter you snapped together. Then, you set it on a “handle,” pulled a plastic ripcord through the handle, and launched it into the air.

It was fun precisely once.

After that, it sucked. Three out of the four figures from the Battle Copter series, though, were awesome. And Interrogator is the best of them.

But can we talk about that helmet? IT’S BADASS. It makes the entire figure. I’ve always loved helmets that have the sort of “T Visor” shape, My love for that design can also be seen in my affinity for Boba Fett, Crusader: No Remorse, The Knight from Dungeon Keeper, and Transformers G2 Hooligan. I just can’t get enough of those helmets!

No other version of this character has a helmet that looks quite as good as this one.

He also looks like an officer. He really hearkens back to the Enemy Interrogators you see in old war movies, or even the Cardassian interrogator from the classic Star Trek: TNG episode “Chain of Command.”

There’s just something about this dude that sets your imagination in motion, whether you’re 8 or 32. I have been both of these ages, and this figure still drives me wild.

Here he is All Geared Up:

He only comes with one accessory, and it’s a weird one. Ostensibly, it’s a submachine gun rendered in a nice, black color. But then, when you look more closely, you notice it has little grabber claws underneath the barrel. Uh… okay?

As a kid, this confused the everliving god damn out of me. Today, I can kind of see it as an interrogation tool. But it’s still kind of silly. And it breaks hell of easy, so be really careful with yours. I am keeping mine in the same giant gun safe I keep my Capri Suns and skunk weed in.

Still, at least it’s a unique accessory that you can see him actually using.

I like that Interrogator fulfills a vital role for Cobra. Every evil terrorist organization needs an interrogator, even if their methods are probably much more humane than what happens at Gitmo or anything the CIA cooks up. Heck, Interrogator’s filecard makes him seem like he approaches information extraction in a way that doesn’t violate international law– which is more than GI Joe or Kiefer Sutherland can say. And, thankfully, the figure lives up to that important role for Cobra.

Verdict: The 1991 Cobra Interrogator is an awesome figure. He fits in with Joes and Cobras from every era, and he provides a unique function within the Cobra organization. The figure also features an amazing design, and features a RADICOOL helmet. If you think the last good named Cobra operatives came out before 1987, I urge you to check this guy out. Just don’t pay any money for a battle copter under any circumstances. You’re too old to ask the neighbors to fetch your plastic army toy from their backyard. Highly Recommended. 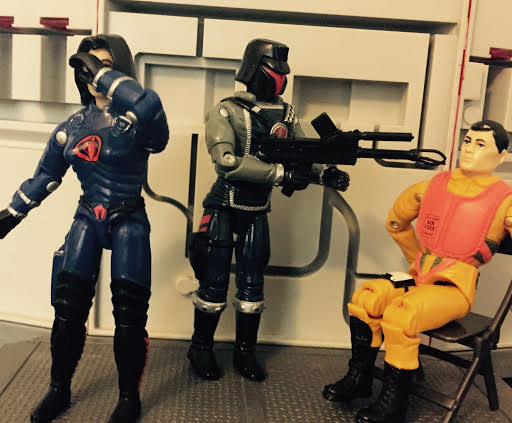 1991 was one of my favorite years for GI Joe, and I feel like the writers and designers were really firing on all cylinders. But there are some things they didn’t consider, such as:

Here are my friend Lyndz’s thoughts on Interrogator:

“He plays badcop for Cobra, but he really aspires to be a great florist. He has two kids and a condescending wife, but he really has a soft side for snapdragons, peonies, daisies, and roses. He breathes and yells out of his cyclops eye and is terrifying but it’s just an act cuz he is a big softie that would rather give a hug than an elbow drop.”

Tell me about your Battle Copter memories in the comments!