They also insist their primary weapon is a highly-modified AK-47 laser rifle, like you can just stick AA batteries in an AK-47’s magazine and it starts magically shooting lasers. Yeah, right.

From the Files of Cobra Commander: “I love those Crimson Guard Commanders! There are totally more than one, and I know exactly what they do and how they’re unique from the rest of the Siegees. Sure, a Crimson Guard Immortal is pretty great, but they don’t have COMMANDER in their name, so they just don’t compare to a Seigee See. Plus, the Crimson Guard Commanders totally supply their own bullets and never complain about putting money into their health savings accounts, unlike the enlisted rabble. Easily my favorite, most elite officers. They’re so cool and badass that if they ever turned against me (they wouldn’t), they’d be almost as dangerous as GI Joe! Plus we’re totally friends and hang out all the time, doing dirt bike stunts and shotgunning cans of Red Dog American Imperialist Lager in the Burger King Parking lot.”

The 1993 Crimson Guard Commander and My Misspent Youth

“Army building” GI Joe figures was a foreign notion to me in 1993, when I got my Crimson Guard Commander. Sure, I thought it would be cool to have a couple of the same Cobra troops, but it made more sense to spend my allowance or odd job money on a unique figure. And there was NO WAY my Mom was going to buy me two of the same plastic army soldier, even though it would help with the heartbreaking tales of military thrills and intrigue I scripted with my soldier men.

Since that was the case, the Crimson Guard Commander was one of the few Cobra troops I had as a kid, and I used him as his filecard suggested– the baddest Cobra Officer on the planet. He was the tough “miniboss” the Joes would have to fight before they got to Cobra Commander, Destro, Metal-Head, Major Bludd, a big rubber lizard I bought at the supermarket, or my family’s border collie.

For most of the 90s, my main Cobra troops consisted of the 1991 BAT, the Sludge Viper, the Toxo Zombie, the Headhunter, The Incinerator, and The Desert Scorpion. Mostly the BAT and the Sludge Viper, if I’m being honest. I loved robots and Eco Warriors were a big thing for me. GI Joe had always been a sci-fi military line to me, as my earliest year being aware of it was 1988. It all seemed natural.

(I also had a HEAT Viper, but he was such a doofus I never used him for anything other than taking up space in my few Cobra vehicles.) 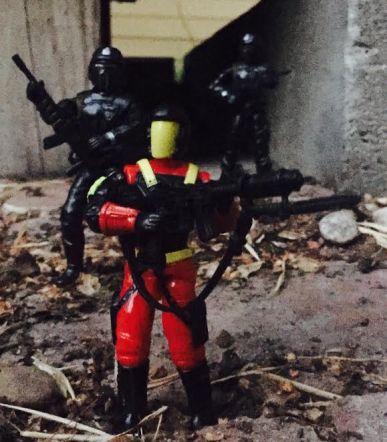 For kids of a certain age, the Crimson Guard Commander was our version of the Crimson Guard. We saw the originals in GI Joe: The Movie, in old episodes of the Sunbow cartoon, and in the Marvel Comic.

Personally, I never even knew about the Crimson Guard Immortal until I started browsing YoJoe.com in the late 90s.

So, Crimson Guard Commanders were tough to beat, like the Yellow Devil from Mega Man. Not impossible, but tough. And, like that aforementioned 8 bit miniboss, they won against the good guys pretty often.

As a kid, this guy was my favorite Cobra Soldier. I even still have my original childhood copy, and he’s even in pretty good shape! He was a figure I treasured.

As many GI Joe fans know, most of the 1993 and 1994 Battle Corps figures came with a “weapons tree,” which was a sprue containing several weapons molded in an often-bright or otherwise odd color. These weapons were all reused from older figures. They also came with spring loaded missile launchers and a couple of missiles.

Even as a kid, I hated the missile launchers and most of the unoriginal weapons. They always seemed so uninspired. For characters like Bazooka or Backblast, it made sense to have a rocket launcher– but for almost everyone else, it was useless. A missile launcher is done in one shot, and just isn’t practical for most situations. Plus, I always thought shooting a person with a missile launcher was a really shitty thing to do. Doom 2 taught me it was something you could do to Martian demons with a clear conscience, but it never even occurred to me that despicable Cobra terrorists might use a missile launcher on a single enemy soldier.

I really don’t feel bad about not having them. It’s not like they include unique weapons anyway.

As you probably guessed, I don’t have the original accessories for this figure, so I wrote a whole section dedicated to making up an excuse for reviewing him anyway.

The figure you see pictured is my childhood Crimson Guard Commander. I think I would have been nine years old when I got him.

Here’s the figure without any accessories:

The design itself is KILLER. The red and black coloring is perfect for a Crimson Guard, and his bulky, armored look is fantastic. The helmet is especially cool, since it makes him perfectly “faceless,” and it has a classic, sleek design. I actually even like the highlighter yellow for the faceshield, as that could be the result of some complex, glowing heads-up display he has on the inside of his visor.

The highlighter yellow straps, belt, and shoulder armor is a little more iffy. But I find it aesthetically pleasing, and I can’t really think of a color other than silver I’d rather see in its place. It’s just fine.

Here’s the 1993 Crimson Guard Commander All Geared Up: 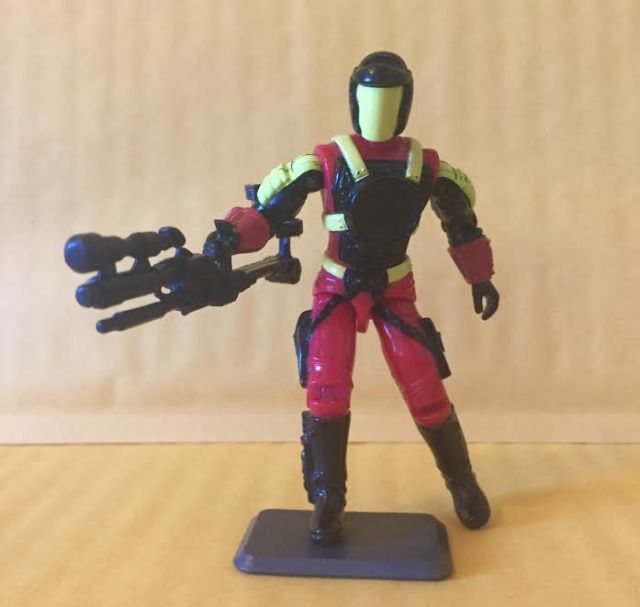 With someone else’s weapon.

As I mentioned, I don’t have any of his original gear. Instead, I tend to use Sonic Fighters Falcon’s weird underslung gun because it reminds me of the Crimson Guard Immortal’s weapon, plus it looks like it could integrate with targeting software in his helmet. I also think a black version of Spearhead’s rifle works well with him, both because of its aggressive look and because it includes the classic Seigee bayonet.

In reality, the Crimson Guard Commander’s weapons tree looked like this. He came with Voltar’s submachine gun, Rock Viper’s big drum-fed rifle, Incinterator’s flamethrower, and Toxo-Viper’s… thing. Oh, and he also included a big ol’ HIGHLIGHTER YELLOW missile launcher. At least most of his weapons came in black, even if none of them were particularly great.

As a kid, I remember using the Flamethrower for him, since I didn’t remember that it was a flamethrower, and because it looked like a sort of sci-fi machine gun to me.

The coolest detail on the 1993 Crimson Guard Commander is the cobra logo on his chest armor, which I tried to capture here:

I still love the look of this guy. I think he works perfectly as an elite Cobra Officer, and I think his colors are pretty reasonable.

Verdict: If you have any Crimson Guards, I think you should have at least one Crimson Guard Commander so he can middle manage the heck out of them. Like he can tell them they need to save their field reports in WordPerfect format and tell them they need to wear at least four medals (pieces of flair) on their dress uniforms. In my opinion, he’s one of the better late-series Cobra soldier releases. Recommended.

Other Musings on the 1993 Crimson Guard Commander 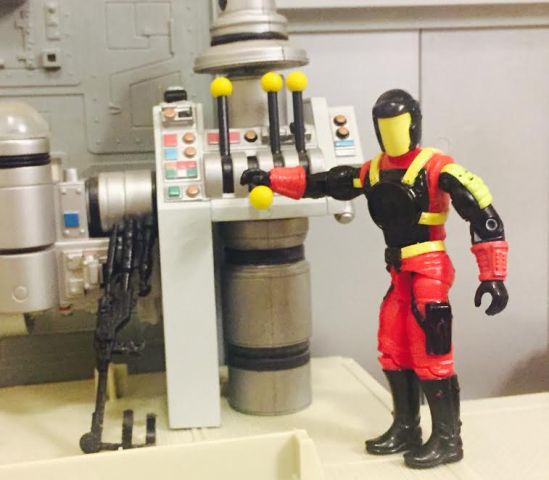 Okay, seriously. What in the god damn heck was this guy intended to do for Cobra? Did they think of anything beyond making a ‘bigger, badder’ Crimson Guard, or did they have something else in mind?

I feel like the 90s filecards always tried to make kids feel good about their purchases. They would tell us “THIS Alley Viper is way tougher than your older brother’s Alley Viper” or “even Cobra Commander is scared of the Crimson Guard Commander.”

And we bought it, because it came from the same adults who told us to say no to drugs by selling us militarized police action figures.

Crimson Guards are already elite troops, and their function (at least in the Marvel Comics) is chilling in today’s world. They’re nice, clean cut white men who infiltrate normal society to tear it down from the inside and/or help radicalize people toward joining Cobra. Crimson Guard Immortals are the combat troops. So, I guess the Crimson Guard Commanders just boss them all around?

Maybe. My guess is they just pick up donuts for the Terror Drome office every Friday, and lock themselves in their offices every day to nap off their hangovers.

Just look at the highlighter yellow helmets. You know these dudes party.

Thoughts From My Friend Pat:

Thoughts From My Friend Herb:

“Commanders are the worst. Think they are king of the roost. Poor etiquette. Will eat your lunch out of the break room fridge. Zero accountability. Chafing caused by gun holster straps contributes to their abrasive persona.”

What do you think the Crimson Guard Commander actually does? Let me know in the comments.